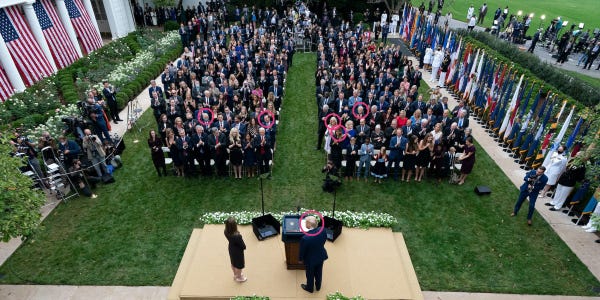 The President and Melania Trump announced early Friday morning that they had tested positive for the coronavirus.

Trump was taken to Walter Reed Medical Center for treatment later that day.

White House physician Sean Conley presented a confusing timeline about when the President was first diagnosed.

Christie was at the White House helping Trump prep between Saturday afternoon through lunchtime on Tuesday.

During that time, nobody was wearing masks while they were in the room together, he told ABC's Good Morning America.

Christie tweeted Saturday that he would be seeking medical treatment, but his condition was unknown.

Ronna McDaniel tested positive for the coronavirus on Wednesday. She was with President Donald Trump last Friday and has been at her home in Michigan since last Saturday.

Her symptoms were mild as of Friday.

Former White House adviser Kellyanne Conway announced on Friday that she had tested positive for COVID-19, She described her symptoms on Twitter as "mild," including a "light cough," and wrote she is feeling fine.

Hope Hicks, counselor to the president

The White House became aware on Wednesday that Hope Hicks, counselor to the President, had tested positive for coronavirus.

Bloomberg News, The New York Times, and CNN reported on Thursday that Hicks traveled with Trump aboard Air Force One to and from the first debate Tuesday between him and the Democratic nominee Joe Biden.

Hicks, 31, has told people close to her that she is experiencing some symptoms of the disease.

The announcement that Bill Stepien tested positive for COVID-19 followed the news that the President was hospitalized.

One senior campaign official told Politico that Stepien is experiencing "mild flu-like symptoms," and people familiar with his diagnosis told the news outlet that he will quarantine until he recovers.

The office of Sen. Thom Tillis announced on Friday that he had tested positive for COVID-19.

Tillis said that he is quarantining.

Sen. Mike Lee also tested positive for the virus on Friday, almost a week after he was seen unmasked at the Rose Garden event announcing the nomination of Judge Amy Coney Barrett.

Lee said his symptoms were "consistent with longtime allergies" and that he would self-isolate for 10 days.

The office of Sen. Ron Johnson announced Saturday that he had tested positive for COVID-19.

He is the third senator to announce that he was infected since the announcement of Trump's diagnosis on Friday.

Johnson, 65, is currently symptom-free and is in isolation, according to the Saturday statement. Polling stations will remain open in COVID-19 hotspots, despite uptick