At least three dead after gas leak in south India 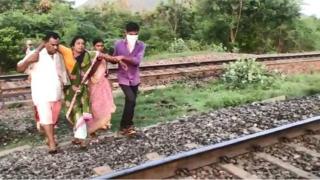 Three people have died, with hundreds of others taken ill, after a gas leak in south India.

The leak, in the city of Visakhapatnam in Andhra Pradesh state, has been traced to a polymer factory.

Doctors told BBC Telugu that “hundreds” of people have been taken to hospital – many complaining of a burning sensation in the eyes and difficulties breathing.

The incident took place at around 03:00 local time (21:30 GMT) after a fire broke out at the LG Polymers plant.

Rajendra Reddy, a senior official in the Andhra Pradesh Pollution Control Board, told BBC Telugu’s Satish Balla that the leaked gas was styrene, which is usually refrigerated.

As the gas spread, residents ran out of their homes in panic.

It is feared that the fumes have spread over a radius of about 3km (2 miles) and officials have been evacuating people from surrounding areas.

A senior district official told the BBC that initial attempts to control the gas leak were unsuccessful – and that it could take a few hours to bring the situation under control.

This breaking news story is being updated and more details will be published shortly. Please refresh the page for the fullest version.

You can receive Breaking News on a smartphone or tablet via the BBC News App. You can also follow @BBCBreaking on Twitter to get the latest alerts.