London: When visiting two future kings at home, it may be difficult to come up with a suitable gift to mark the occasion.

Fortunately Sir David Attenborough had just the thing in his pocket: the tooth of a 23 million-year-old giant shark he found on holiday. 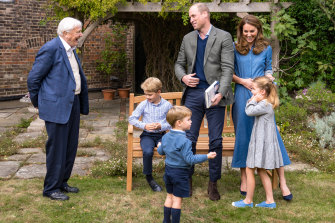 Attenborough has personally presented Prince George with the treasure, which he found in the 1960s during a family trip to Malta.

The young Prince, who like many small boys has a fascination with fossils, appeared thrilled with the gift, shown beaming in a photograph and studying it proudly.

Attenborough, 94, visited Kensington Palace this week for an outdoor screening of his forthcoming film with Prince William, the Duke of Cambridge. 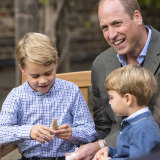 Prince William and Prince Louis react as Prince George holds the tooth of a giant shark given to him by Naturalist Sir David Attenborough.Credit:Kensington Palace

But the opportunity to see their broadcasting hero proved too much of a lure for the whole family, as the Duchess and the three Cambridge children joined the party in the garden after school.

A photograph capturing the moment they met, while adhering to social distancing, shows Princess Charlotte, 5, with her hands clasped to her face in apparent delight, as she stares at Attenborough's familiar face.

William, holding a copy of the naturalist's latest book, greets him like an old friend, while the Duchess laughs at her children's reactions.

Prince Louis is dressed smartly for the occasion, and was soon absorbed in a show-and-tell of the ancient shark's tooth.

George, 7, is known to have a fascination with dinosaurs, with his mother once telling a group of children during a Natural History Museum visit that he "loves the T Rex because it's the noisiest and the scariest".

The visit was a long time coming for the three children, who have all watched his television programmes.

On a previous encounter with Attenborough, the Duchess told him: "The children were very upset that we were coming to see you and they weren't coming, they're massive fans of yours."

William and Attenborough have been working together for some time on their shared passion for the environment, appearing on stage together at Davos, for a joint unveiling of the ship once named "Boaty McBoatface", and at the premiere of his documentary Our Planet.

Their partnership has now extended to William's Earthshot Prize, due to be formally launched soon, with Sir David providing the voice-over for its introductory video.

On Thursday, he paid a visit to the Cambridges at their London home, for a special screening of his new film, David Attenborough: A Life On Our Planet, said to be his "most personal project to date, in which he presents some of the most defining moments of his career as a naturalist and the devastating changes he has seen".

William and Attenborough were photographed watching the film on a cinema screen beneath traditional red velvet curtains, sitting in directors' chairs on which they swapped the names on the back for their amusement.

A source said William had thoroughly enjoyed the film, thinking it was "one of Sir David's best yet" and noting that its optimistic message is "very much in line" with his own views. "It says 'we've got a chance to fix this'," said the source, of the films' approach to saving the planet. "That very much chimes with the Duke's view that we've got an opportunity to get this right."

The film will premiere in cinemas tomorrow before launching on Netflix.