Aussie drawn into Palace's bullying probe of Harry and Meghan

A tough-talking Australian dubbed ‘Samantha the Panther’ could be a key figure in a Buckingham Palace probe into allegations Prince Harry and Meghan Markle bullied staff after working as the couple’s private secretary.

Samantha Cohen was the Queen’s assistant private secretary before moving to Kensington Palace after being entrusted by the Monarch to prepare Meghan for life in the Royal Family.

Originally from Brisbane, Ms Cohen had planned to quit Buckingham Palace in 2018 but agreed to stay on and help Meghan navigate through her first months as a royal.

Ms Cohen was a guest at Harry and Meghan’s wedding in May, 2018 and was believed to have helped play a key role in preparing Meghan for a garden party at Buckingham Palace, which was her first appearance as the Duchess of Sussex.

She left her role with the couple in October, 2019 amid claims she was experiencing extreme stress and went to work for the environmental charity Cool Earth.

Ms Cohen had spent 18 years with the Royal Family and was described as being ‘deeply committed to serving the monarchy’. 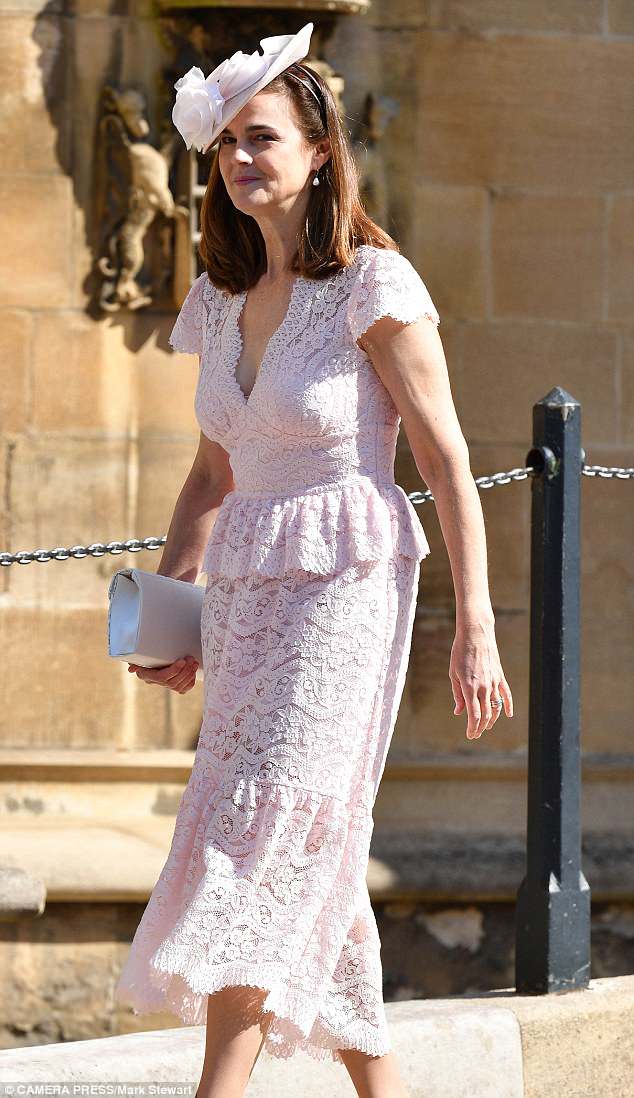 Ms Cohen became the Sussexes’ private secretary in 2018 after being entrusted by the Queen to help prepare Megan for royal life. She is pictured at Harry and Meghan’s wedding in May, 2018

WHO IS SAMANTHA COHEN?

Originally from Brisbane, Samantha Cohen is a mother-of-three known as ‘Samantha the Panther’ for her feisty attitude.

After studying at the University of Queensland, Ms Cohen worked in civil service and public relations and joined Buckingham Palace in 2001.

She answered a newspaper job advertisement for a media minder at the palace while she was on a trip to London almost 20 years ago.

She became deputy press secretary in 2003, before getting the top job in 2007, becoming the first woman to be appointed in the role.

Ms Cohen had also worked for Liberal ministers in both the Queensland and Federal governments.

She was made a Commander of the Royal Victorian Order by the Queen in 2016.

Buckingham Palace announced last week they will launch an investigation into allegations Meghan bullied royal aides, none of whom have been named.

The probe, which is currently being billed as an ‘internal review’ by human resources, could hear evidence from up to ten royal aides who worked for the couple.

Past and present staff will be invited to speak about their experiences, with the aim to improve human resources policies at the palace and see if lessons can be learnt.

However, it has not yet been confirmed who any of them may be including whether Ms Cohen will take part in the review.

Meghan is accused of ‘driving out’ two PAs and shattering the confidence of another member of Kensington Palace staff – with one former aide branding Prince Harry and his wife ‘outrageous bullies’ in The Times.

The newspaper reported that in October 2018 an official complaint was made by one of their most senior aides, Jason Knauf, then head of communications, who alleged that Meghan bullied two PA’s ‘out of the household’ within the space of a year and was targeting other female staff.

Mr Knauf said in an email leaked to The Times he was also concerned about Ms Cohen.

He indicated that she was experiencing extreme stress and said: ‘I questioned if the Household policy on bullying and harassment applies to principals (the term used to refer to a member of the royal family)’.

Part of the probe will examine why his concerns were apparently not acted upon despite them being raised with several senior royal household staff at the time.

There are claims some of the alleged behaviour occurred during Harry and Meghan’s tour of Australia, New Zealand, Fiji and Tonga in October, 2018. 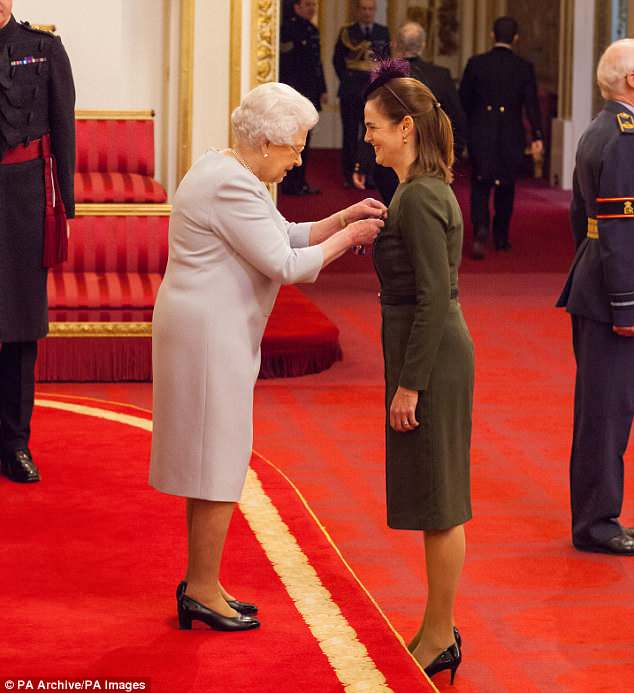 Samantha Cohen was made a Commander of the Royal Victorian Order by the Queen in November, 2016 (pictured)

It also claimed the monarchy’s ‘men in gray suits’ were aware of the purported actions of Meghan – but did ‘absolutely nothing to protect people’.

The couple were allegedly ‘outrageous bullies’, with ‘broken’ royal aides feeling ‘humiliated’, ‘sick’ and ‘terrified’ and even reduced to tears by the duchess.

Meghan has denied the allegations and accused the newspaper of being ‘used by Buckingham Palace to peddle a wholly false narrative based on misleading and harmful misinformation’ about her treatment of staff.

Her lawyers said the former actress was ‘saddened by this latest attack on her character, particularly as someone who has been the target of bullying herself and is deeply committed to supporting those who have experienced pain and trauma’.

Meghan and Harry have also accused the Queen’s staff of orchestrating a ‘calculated smear campaign’. Palace sources slapped down the smear claim as utterly ‘disingenuous’.

Buckingham Palace last Wednesday confirmed that its HR team will ‘look into’ the bullying allegations, saying it ‘does not and will not tolerate bullying or harassment in the workplace’. 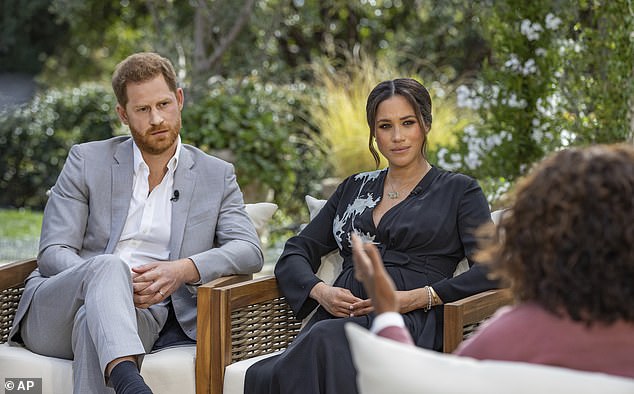 A bullying complaint was lodged against the Duchess of Sussex by a senior member of Kensington Palace staff before she and Prince Harry quit as working royals, it was dramatically claimed last week. Pictured: Meghan (centre) and Prince Harry (left) sit down with Oprah Winfrey (right) for an interview 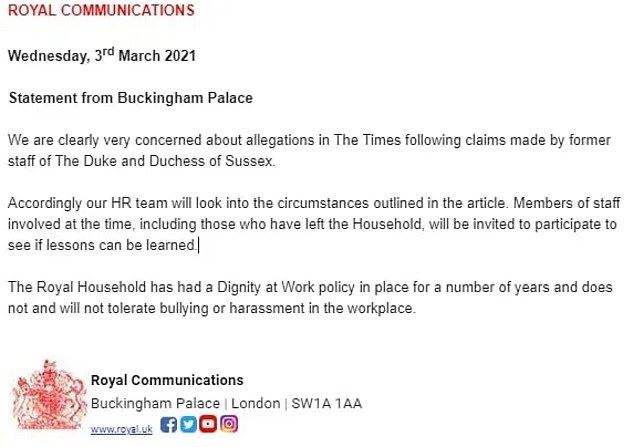 Buckingham Palace last Wednesday confirmed that its HR team will ‘look into’ the allegations, saying it ‘does not and will not tolerate bullying or harassment in the workplace’

A spokesperson said: ‘We are clearly very concerned about allegations in The Times following claims made by former staff of The Duke and Duchess of Sussex.

‘Accordingly our HR team will look into the circumstances outlined in the article.

‘Members of staff involved at the time, including those who have left the Household, will be invited to participate to see if lessons can be learned.

‘The Royal Household has had a Dignity at Work policy in place for a number of years and does not and will not tolerate bullying or harassment in the workplace.’

The investigation may not release its findings until next year, with royal sources saying there is no set timeframe after the explosive allegations were made.

The Mail has been told that palace officials are happy to let the review take as long as necessary, particularly as a number of those who may wish to give evidence no longer work for the Royal Household.

‘No timeframe has been set,’ said a source, ‘particularly as a number of people do not work for the palace and we have to fit around that should they wish to take part.

‘There will be no push to rush through this. It is a very sensitive issue.

‘The fact that we are doing this and have made clear that we are very concerned about the allegations shows how seriously this is being taken.’ 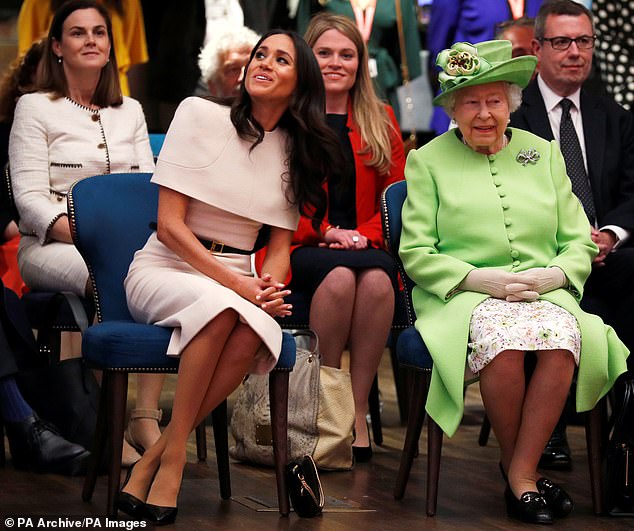 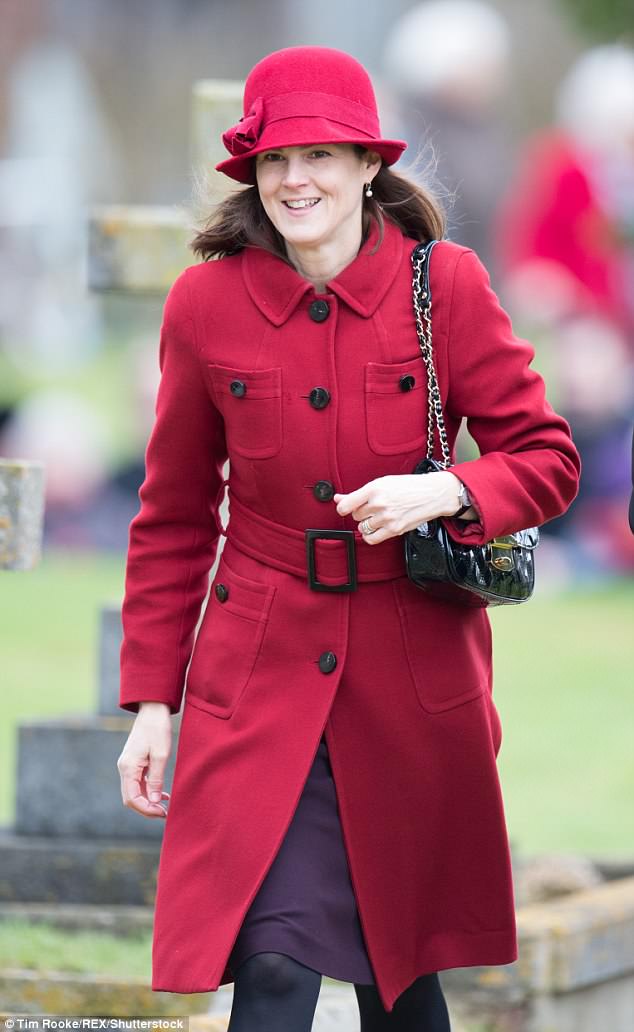 Sources connected to a group of aides ready to give evidence told the Daily Mirror how there were ten former Kensington Palace staff who want to be involved.

One royal source said: ‘A group of people are queuing up to be involved. They have been silent for too long and there is much to talk about.’

Any changes in policies or procedures will be shared in the Sovereign Grant report which is published annually and documents royal accounts for the year.

During the interview, Meghan tearfully revealed the stress of royal life made her suicidal when she was five months pregnant.

She told Oprah she ‘couldn’t be left alone’ and told her husband she ‘didn’t want to be alive anymore’ before claiming the Buckingham Palace HR department ignored her plea for help because she wasn’t a ‘paid employee’.

Meghan also accused the Royal Family of ‘perpetuating falsehoods’ about her and Harry and says she did not know how Buckingham Palace can expect her to ‘be silent’.

‘I don’t know how they could expect that, after all of this time, we would still just be silent if there is an active role that The Firm is playing in perpetuating falsehoods about us,’ she said.

‘And, if that comes with risk of losing things, I mean, I… there is a lot that has been lost already.’