The average UK house price hit a new record high of £231,068 in February, according to figures from Nationwide.

Property values climbed by 6.9% annually, up from 6.4% in January, in what the Nationwide Building Society House Price Index described as a ‘surprise’ acceleration.

It comes as a stamp duty holiday is due to end on March 31, but there have been reports that it could possibly be extended for another three months. 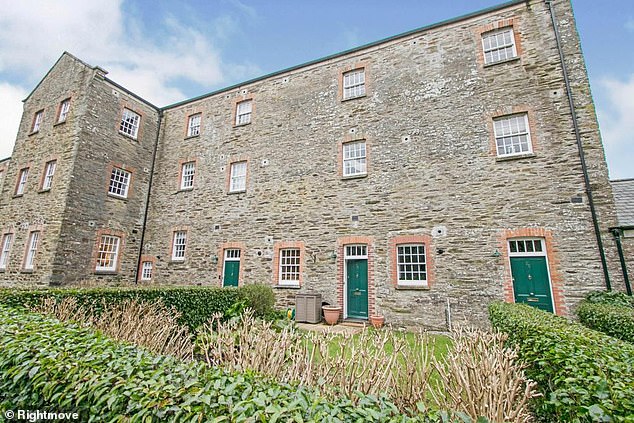 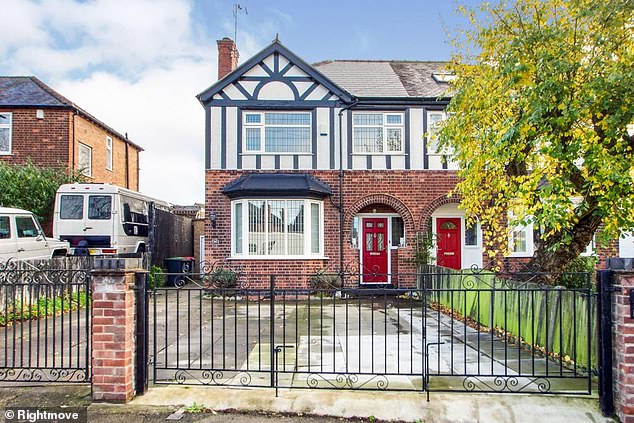 A property on the market in Nottingham for £230,000, just below the new record UK price average

‘This increase is a surprise. It seemed more likely that annual price growth would soften further ahead of the end of the stamp duty holiday, which prompted many people considering a house move to bring forward their purchase.’

Mr Gardner added: ‘Many people’s housing needs have changed as a direct result of the pandemic, with many opting to move to less densely populated locations or property types, despite the sharp economic slowdown and the uncertain outlook.’

Previously, data revealed how the scramble to beat the end of the stamp duty holiday on March 31 has added £57,000 onto the price of the average home – up to five times the amount that would have been saved in tax.

Since the stamp duty holiday was introduced last July home movers have saved an average of £11,566 on properties sold, according to Halifax.

But, in the last six months of the year, the average property price was £57,790 higher, at £431,327 – an increase which equates to around five times the amount saved on stamp duty. 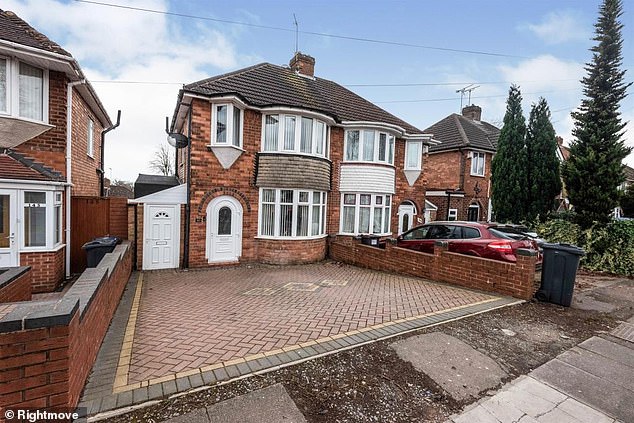 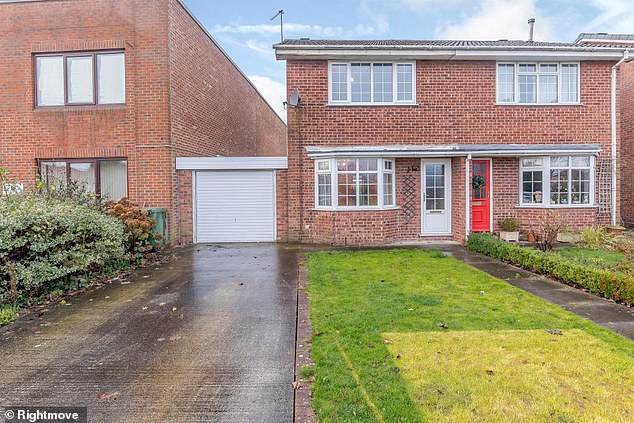 A house in York on the market for £230,000. Estate agents have seen particularly large gains in rural areas or market towns in recent months

Only first-time buyers in London and the South East are saving money as a result of the stamp duty relief – in London the increase in deposit (£2,848 on average) offset by savings of £9,723 is leaving them £6,875 better off.

In the South East, first-time buyers are on average saving £2,054 as the increase in deposit (£3,471) has been partially offset by the stamp duty holiday savings of £1,417.

Meanwhile, rents in the Capital could plunge and house prices fall amid a ‘mass exodus’ of workers during the coronavirus pandemic, experts have predicted.

A sudden drop in the population of the UK last year has led to a huge rise in vacancy rates in the London and Midlands rental markets, according to analysis by Capital Economics.

Labour market data suggests there was a ‘mass exodus’ from the UK as foreign workers returned home, leading to a drop in the population of around two per cent.

If sustained, the increase in vacancy could cause rents to drop by as much as 20 per cent, according to property experts.

According to data published by Zoopla, rents in London are continuing to fall. 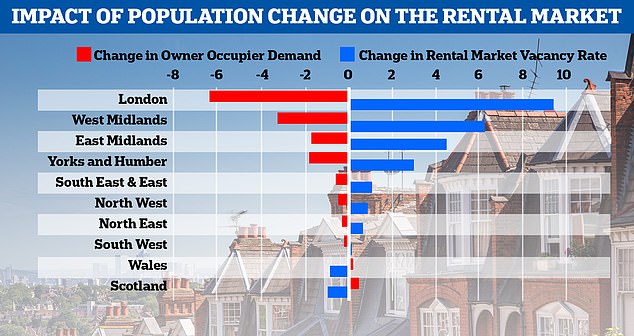 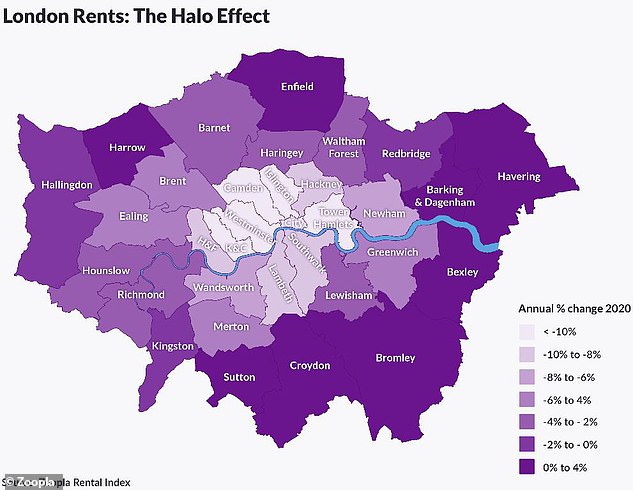 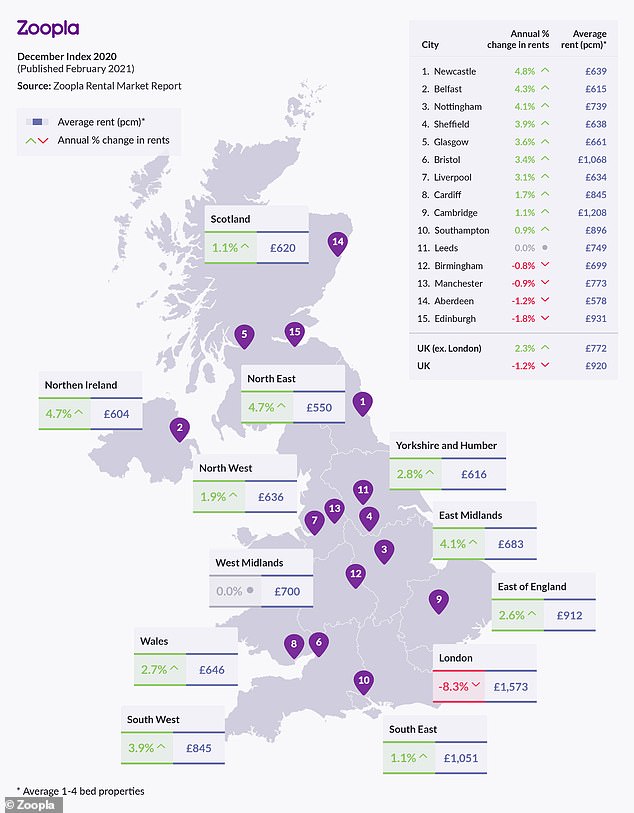 According to data from Zoopla published today, rents in London are continuing to fall – but across the UK as a whole, excluding London, rents are up 2.3%, matching pre-Covid levels, and demand is up 21% year on year

Working from home has also affected the market, with average rents in the Capital falling by some 8.3 per cent last year.

Rents in the City of London fell by 17.3 per cent, while rents in Kensington and Chelsea have declined by 12.3 per cent.

Rents in the Capital declined by 2.5 per cent in the fourth quarter in 2020, taking the annual fall to 8.3 per cent – nearly matching the rental declines seen in the aftermath of the Global Financial Crisis is 2008.

Average rents in London are now at the levels last seen in 2014.

There was an annual fall in rents in Edinburgh (-1.8 per cent), Greater Manchester (-0.9 per cent) and Greater Birmingham (-0.8 per cent), Zoopla says.

But in contrast, a ‘halo effect’ emerged in the commuter zones of cities, with rents rising as renters freed from the daily commute looked for homes with more space and gardens amid three successive lockdowns.