Bailout of the giants: Biggest firms put thousands of staff on furlough – and we face £60bn bill

More of Britain’s biggest firms revealed plans yesterday to suspend tens of thousands of staff in a move which could cost the taxpayer up to £60billion over the next six months.

In a vivid illustration of the impact of coronavirus on the economy, British Airways, Nissan, Topshop owner Arcadia and energy firm Ovo all announced plans to furlough workers as they try to cut costs.

They join a growing list of household names, from Greggs to Costa, McDonald’s and Primark, which have already sent home 400,000 staff.

All plan to reclaim wages from the Government’s job retention scheme, which covers 80 per cent of salaries up to £2,500 a month. 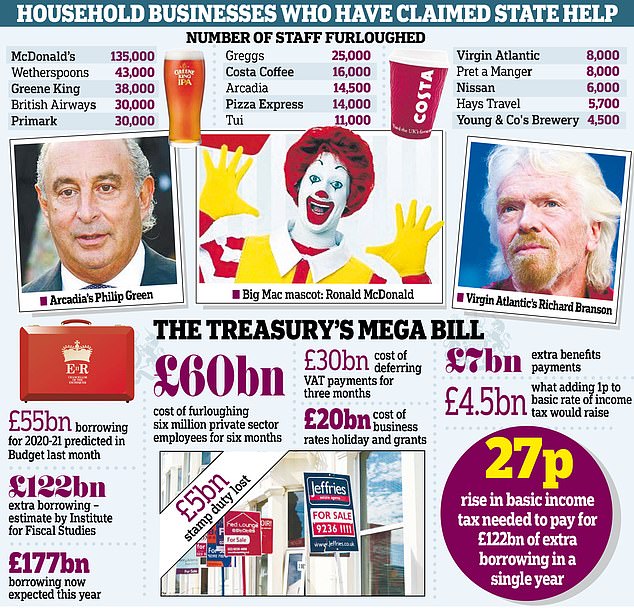 Experts at the Centre for Economics and Business Research think-tank last night predicted that as many as 6.1million private sector employees could be furloughed.

The IFS conceded the totals were ‘uncertain’, but they underline the huge cost of the Covid-19 outbreak to the country.

The furlough scheme is not expected to be up and running until the end of the month, meaning many will have to get by for weeks.

And the number of those furloughed is set to spiral in the coming weeks. The British Chambers of Commerce estimates 44 per cent of firms expect to furlough at least half of their staff, and almost a third between three-quarters and all of their workforce over the next week.

There are now growing fears the Government may have underestimated the cost of subsidising the wages of Britain’s workforce, having already committed a £330billion rescue package for businesses.

The IFS’s Carl Emmerson said: ‘Large increases in borrowing are well advised to address this current crisis, but the consequences for the public finances will be felt long after the immediate public health emergency has hopefully passed.’

Yesterday British Airways confirmed plans to suspend more than 30,000 staff – roughly three-quarters of its workforce – until the end of May. Those furloughed include the vast majority of cabin crew, ground staff, engineers and those working at head office. Thousands of pilots have already been suspended with a 50 per cent pay cut.

Arcadia Group – the retail empire of disgraced billionaire Sir Philip Green which owns Topshop, Dorothy Perkins and Miss Selfridge – announced it would be suspending 14,500 of its 16,000 staff.

For shop workers, the furlough is effective from March 21 – when non-essential retailers were ordered to shut down stores – while most head office staff have been told they will be suspended from tomorrow.

Nissan also revealed the majority of the 6,000 workers at its Sunderland plant, which closed on March 17, will be furloughed for the remainder of this month, while energy firm Ovo will suspend 3,400 staff – more than a third of its workforce. Before 'Tiger King' Mania, Dakota Johnson's Mom, Melanie Griffith, Was Attacked by Lions That Belonged to Her Own Mother, Tippi Hedren
We and our partners use cookies on this site to improve our service, perform analytics, personalize advertising, measure advertising performance, and remember website preferences.Ok