New Delhi: An Indian court has sentenced three men to life in prison for the abduction, rape and murder of an eight-year-old girl in a case that sparked a nationwide furor and inflamed tensions between Hindus and Muslims. Three others were convicted of destroying evidence and punished with a five-year jail term and a fine.

Calling the crime a "barbaric act," state prosecutor JK Chopra said authorities had asked for the death penalty for three of those convicted. A defence lawyer said the Monday verdict would be appealed. 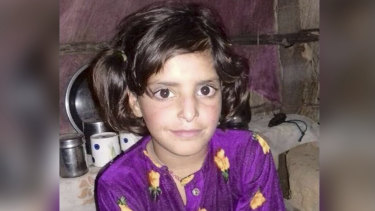 Asifa Bano, 8, who was raped and murdered in India.Credit:AP

India has struggled with a series of horrifying cases of rape and murder involving children in recent years, and authorities are taking increasingly harsh measures against the culprits.

In the wake of the eight-year-old Asifa Bano’s killing last year, India passed legislation making the rape of girls under the age of 12 punishable by death.

Official statistics show that incidents of rape are increasing in India, although it is unclear how much of the rise is due to more reporting of such cases. Advocates say the majority of rape cases remain unreported.

Asifa's case, in the state of Jammu and Kashmir, gained national attention both for the gruesome nature of the crime and the response it elicited from local members of India's ruling party, some of whom protested the charges against the suspects.

Early last year, Asifa, who belonged to a nomadic Muslim community, went missing from a village in the district of Kathua, which is in the Hindu-dominated area of Jammu. By contrast, the Kashmir valley portion of the state has a Muslim majority.

Days later, her body was found in a forest where she would often go to tend to her family's horses.

The investigation revealed the girl had been sedated, gang-raped and strangled with her own scarf. Her head had been bashed with a rock. The brutality took place over four days in a small Hindu shrine.

Eight men were arrested for the crime, including one juvenile whose trial will be held separately. The police charged Sanji Ram, a retired government clerk, with plotting the crime as part of a plan to rid the area of the Muslim nomads.

On Monday, three men – including Ram and one police officer – were convicted of the rape and murder while a fourth was acquitted. Three other police officers were found guilty of helping to destroy evidence of the crime.

"We wanted to see them hanged till death," said Sudam Hussain, a family member of the girl, adding that they had not received "complete justice".

Outrage over the slaying was soon overshadowed by controversial rallies that took place in support of the suspects. Two local members of India's ruling Bharatiya Janata Party, or BJP, participated in the protests. In one instance, lawyers physically tried to block police officers from filing the charges, claiming Hindus were being unfairly targeted.

The girl's family had approached India's Supreme Court for protection, saying they had received threats to their lives. The court moved the trial to the neighbouring state of Punjab. The proceeding began in May and was closed to the media.

No media were allowed into the courtroom for the verdict, and Asifa's immediate family members were not in attendance. Outside, there was a heavy security presence including armoured vehicles and teams of police officers.