Bare-faced Boris! PM is seen travelling on packed train WITHOUT a mask

Bare-faced Boris! PM is seen travelling on a packed train WITHOUT a mask… 24 hours after apologising for failing to wear one in a hospital

Boris Johnson has been pictured travelling on a train without a face mask just 24 hours after he apologised for failing to wear one during a hospital visit.

The latest picture was taken on Thursday as Johnson travelled from Oxford Road Station in Manchester on the 3.55pm service to Warrington Bank Quay during a busy week for the Prime Minister.

Just 24 hours earlier, at a meeting of Parliament’s Liaisons committee held at 4pm on Wednesday, Johnson was apologising for failing to wear a mask during a hospital visit in Northumberland on Monday.

Passengers were shocked to see the premier was not wearing a face covering on Thursday despite Government guidance advising the use of masks in enclosed spaces and on public transport.

A source told the Mirror: ‘I got on to the carriage and half was taped off. A large group boarded the blocked-off side, under guarded supervision. 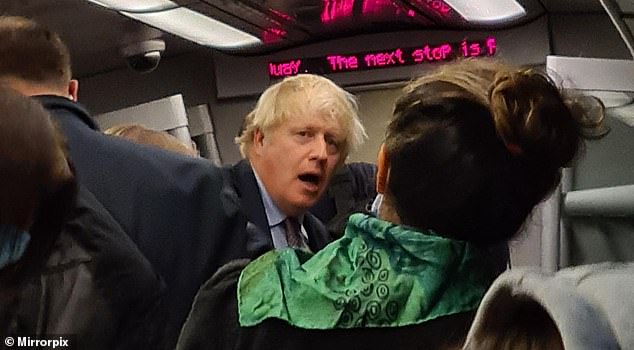 Maskless: Prime Minister Boris Johnson has been pictured travelling on a train without a face mask just hours after he apologised for failing to wear one during a hospital visit this week 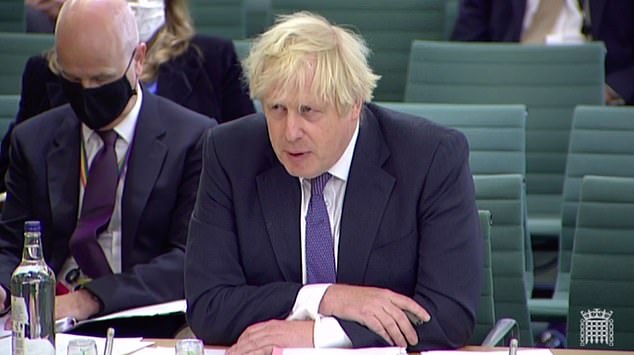 Pictured: Boris said sorry a day earlier for not wearing a mask during a hospital visit in Hexham

‘There were people surrounding the PM and a few of his people were noticeably not wearing a mask – unlike the rest of the passengers.’

The incident came 24 hours after Boris had apologised for not wearing a mask during a hospital visit last week.

The Prime Minister was criticised after he was photographed without a face covering during a trip to Hexham General Hospital.

It emerged that Mr Johnson had to be reminded by NHS staff to put on a mask after he posed with nurses without a face covering.

He insisted on Monday that he wears a mask wherever he is required to under coronavirus guidance as he declined to apologise.

It wasn’t until days later that Johnson did say sorry as he was grilled by Parliament’s powerful Liaison Committee at 4pm on Wednesday. 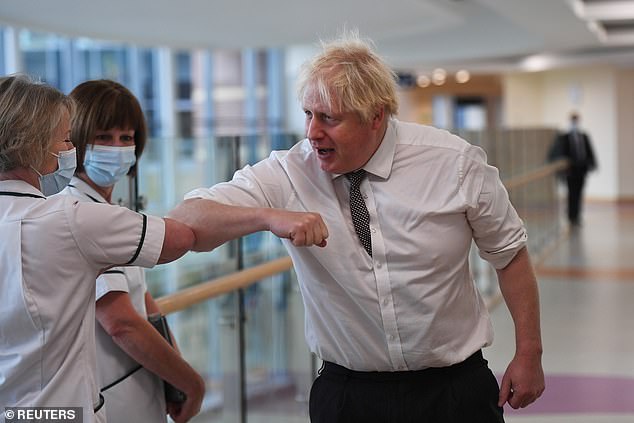 It comes after last week, the Prime Minister was widely criticised after he was photographed without a face covering during a trip to Hexham General Hospital. He apologised days later

Mr Johnson was questioned on the issue by senior Labour MP Yvette Cooper and he said: ‘As for not wearing a mask in Hexham hospital, which you wrap up into my general litany of crime, can I just say that actually it was barely 30 seconds when I wasn’t wearing a mask.

‘I walked out of a room, mistakenly not wearing it. I then put it on as soon as I realised I had made that mistake.

‘I apologise for it. But most pictures of my visit to the hospital will show that I was duly masked throughout the remainder of the visit and I was masked on the way into the visit and I thank you for giving me the opportunity to clear that up.’

Government guidance says ‘people are expected and recommended to wear a mask when in contact with people they don’t normally meet in enclosed and crowded spaces’.

Compulsory masks are part of the Government’s plan B to be implemented if the coronaviruses puts undue pressure on the NHS.

Speaking to reporters during a visit to a vaccination centre in London last month, Johnson said: ‘There are lots of steps that we need to take to continue to follow the guidance.

‘Commonsensical things, washing your hands, wearing a mask in confined spaces where you are meeting people that you don’t normally meet. That’s sensible.’

Speaking at a Downing Street press conference last Monday, a croaky Mr Johnson, who was suffering from a cold, said adhering to mask rules was ‘the responsible thing to do’.

‘I wear a mask wherever the rules say I should and I urge everyone else to do the same,’ he said.

‘People have actually seen me wearing face coverings quite a bit more regularly as we have seen the numbers (of infections) ticking up in the UK.

‘I think that is the responsible thing to do and I am going to continue to do it.’

He also came under fire when he was pictured at the Cop26 summit in Glasgow seated next to Sir David Attenborough while not wearing a mask.