One of Australia’s top basketballers, Mitch Creek, has been charged by police with intentionally causing injury and other offences after allegedly assaulting a woman at her Melbourne home.

Mr Creek is a star player and co-captain of the South East Melbourne Phoenix in the National Basketball League, has played in the NBA in the United States, competed in the World Cup and is in the running to represent Australia at this year’s Tokyo Olympics. 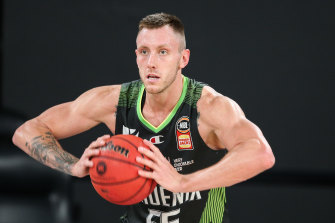 Mitch Creek in action for the South East Melbourne Phoenix in their win over the Brisbane Bullets in February.Credit:Getty Images

Mr Creek, 28, had been charged on summons with intentionally causing injury, recklessly causing injury and unlawful assault over an incident in Melbourne’s western suburbs on November 22 last year.

He had the charges served on his lawyer on Monday, after starring in the NBL Cup tournament in Melbourne over the past month. Mr Creek led his undermanned Phoenix to a 97-92 overtime win over NBL leaders Melbourne United last Wednesday in one of his best NBL performances.

The charges follow a four-month investigation after a woman in her 20s suffered serious facial injuries. Mr Creek is due to appear before Sunshine Magistrates Court on April 1.

The NBL said on Monday that the league, the Phoenix and Mr Creek had agreed that he would not train or play with his club until further notice, while Basketball Australia investigates the incident.

Mr Creek’s lawyer, Casey Isaacs, confirmed charges had been served and said his client would contest them.

“The charges will be defended, but given the matter is now in court we won’t be commenting,” Mr Isaacs said.

Police say they interviewed a 28-year-old Ashburton man over an incident in the western suburbs on November 22 last year.

As one of Australia’s most high-profile basketballers, Mr Creek – who is 1.96 metres tall and weighs about 98 kilograms – has been used to promote the domestic league in the past and is enjoying a standout personal season, while his team has a 9-7 [win-loss] record and sits just outside the top four.

He scored a season-high 31 points and grabbed 10 rebounds to lead the Phoenix to victory over United on March 10, despite only six of their 11 rostered players being fit to play. Phoenix coach Simon Mitchell described the effort as Mr Creek’s best game for the club. 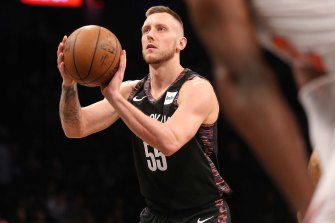 Mitch Creek playing for the Brooklyn Nets in the NBA in 2019.Credit:USA Today Sports

Mr Creek followed it with two 21-point efforts in wins over Cairns on Friday and New Zealand Breakers on Sunday.

Mr Creek said in a post-game press conference he told his players before the tip-off they should embrace the challenge.

“What more do you want in life and sport?” he said.

“When everything is stacked against you, you want to silence the critics and those who say you should lose this one because you have a lot of guys out.

“Tonight was an example game for us. We can do it and we are good enough. We have to do it more often now and I wanted to lead by example.”

In a joint statement, the NBL and South East Melbourne Phoenix said they had discussed the charges with Australian Basketball Players Association and Basketball Australia’s integrity unit.

“The NBL and South East Melbourne Phoenix are deeply concerned by the nature of the charges against Mitch Creek and take this matter extremely seriously,” the league and club said.

“The NBL, South East Melbourne Phoenix and Mitch Creek have all agreed that he will not train or play with the Club until further notice,” the statement said.

Mr Creek’s absence will leave a large hole in the Phoenix line-up although the club recently signed NBA player Ryan Broekhoff, who represented Australia at the 2016 Olympics, for the rest of the season.

The Phoenix have two games in the next two weeks, including one against cross-town rivals Melbourne United, but the NBL is still to confirm its schedule beyond March 29.

Mr Creek is among the candidates for the NBL MVP award and is averaging 21 points per game (fourth in the NBL) and 7.2 rebounds (seventh in the NBL) from 16 games. 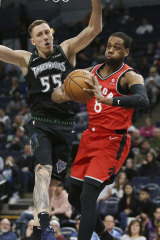 Mitch Creek (left) playing for the Minnesota Timberwolves in the NBA in 2019.Credit:AP

He grew up in Horsham and his talent earned him a stint at the Australian Institute of Sport before he spent nine years with the NBL’s Adelaide 36ers, where he developed his game and earned a call-up to play for Australia and received offers to play in Germany and the US.

In 2018, he joined the elite group of Australians to play in the NBA when he signed short-term contracts with the Brooklyn Nets, for four games, and then played one game for the Minnesota Timberwolves towards the end of that season.

In 2019, he played for Australia against Team USA in an exhibition match at Melbourne’s Marvel Stadium and also played for the Boomers in their World Cup campaign in China. Australia finished fourth.

Mr Creek joined the Phoenix for the 2019-2020 season as a franchise player and had an outstanding personal season until he suffered a knee injury late in the season, which dashed his hopes of returning to the NBA.

Major Australian sports deal with criminal charges against players in a variety of ways.

The NRL introduced its “no-fault stand-down” rule in 2019 meaning players facing serious criminal charges that could be punished with more than 11 years in jail are automatically stood down by the league until their legal proceedings are finalised.

The NRL players union and the NRL went to an independent arbitrator after the union challenged the stand-down rule but the arbitrator found in favour of the NRL last month.

The AFL leaves it up to individual clubs to deal with players facing legal matters.

It is not yet clear what impact the charges will have on Mr Creek’s future national aspirations.