Battle ensues over the Heart of England Forest trust

The Battle of Billionaire Forest: Publishing tycoon Felix Dennis spent millions on a vast new woodland haven in the heart of England. So why, six years after his death, has his legacy turned to local warfare, with a VERY feisty Lady leading the charge

Deep in the Warwickshire countryside, not far from Stratford-upon-Avon, is the Heart of England Forest, a lush green stretch of woodland currently spanning over 7,000 acres and rustling with more than 1.8 million broadleaf trees and hedges.

It is the legacy of the late Felix Dennis, the maverick publishing baron who — after having his fair share of difficulties with the law — made a vast fortune, partied like a lord on crack cocaine and booze, and then, one day, out of the blue, as he ‘wandered aimlessly’ through London, fell in love with four pyramid hornbeams standing proudly in a Soho square.

‘Enormous, brooding and magnificent . . . I had passed them a hundred times before, scarcely glancing at them,’ he wrote.

An obsession was born. By the time of his death in 2014, he’d become Britain’s most prolific tree planter.

The Heart of England Forest (HOEF) is his legacy — a charitable trust into which he ploughed millions of pounds of his vast fortune, and which is now chaired by his old pal, the bright-tie-wearing broadcaster, Jon Snow. 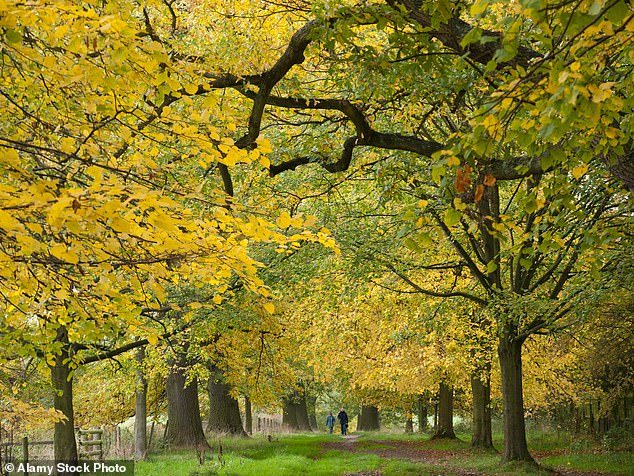 Deep in the Warwickshire countryside, not far from Stratford-upon-Avon, is the Heart of England Forest, a lush green stretch of woodland currently spanning over 7,000 acres and rustling with more than 1.8 million broadleaf trees and hedges

It has won a raft of awards, has had praise lavished upon it by BBC1’s rural affairs programme Countryfile and the Country Land and Business Association and, every year, snaps up more and more land.

Its target is 30,000 acres, and it is acquiring land at a rate of around 300 acres a year on which to plant thousands more trees: birches, oaks, chestnuts, maples, alders, beech, hornbeam, sycamore and dogwood.

All of which sounds really rather wonderful. In fact, what could be better news for the British countryside as, a few miles down the road, HS2 diggers smash down swathes of ancient woodland? But sadly the reality would appear to be rather different.

Felix’s dream might have come true but, for a handful of his former friends and neighbours, it has turned into a nightmare.

They say that the wealthy trust is bullying and all-powerful and, with such deep pockets, can outbid everyone for any land it fancies.

They insist that over the past five years it has been mismanaged and the land neglected, with catastrophic results.

What’s more, the deer population — roe, fallow deer and muntjac — has not been properly managed, they say, resulting in an explosion in numbers, making the growing herd a hazard to drivers and local livestock.

A short walk into the woodland is enough to see that many young trees have died and the plastic tubes that once supported them have been left to litter the woodland.

For its part, the trust insists it has a deer-management scheme, carries out regular tree maintenance and has always prided itself on its community relationships.

But most worrying for local farmers and landowners is that Felix’s Forest is now so overgrown with ragwort — the highly poisonous plant that can kill horses and other livestock — that it is spreading through hedges and fences, racing across meadows, encroaching on farm land and threatening local racing stables.

But, despite this lengthy charge sheet, many of them say they dare not speak out publicly. ‘The trust is very powerful,’ says one. Another man tells me: ‘I’m nervous, I have a planning application pending and don’t want to jeopardise it.’

But Lindy, Lady Kilmaine, a bolshie 77-year-old widow who lives in a 17th century Grade II-listed mansion with 30 acres surrounded on three sides by HOEF land, is too angry to keep quiet. 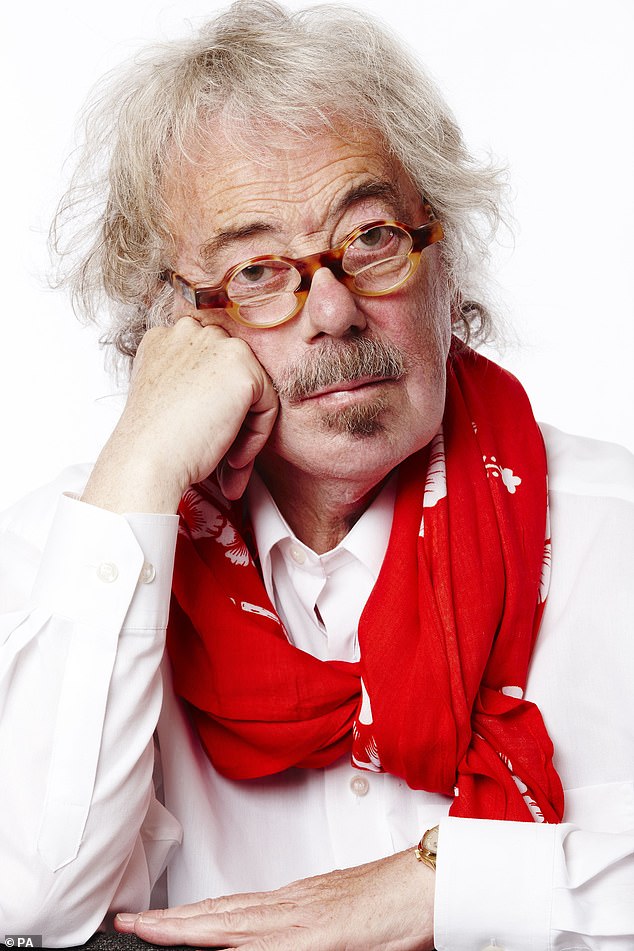 It is the legacy of the late Felix Dennis, the maverick publishing baron who — after having his fair share of difficulties with the law — made a vast fortune, partied like a lord on crack cocaine and booze, and then, one day, out of the blue, as he ‘wandered aimlessly’ through London, fell in love with four pyramid hornbeams standing proudly in a Soho square

‘I have to speak. I’m not afraid and I’ll never forgive myself if I don’t,’ she says. ‘Because it’s everywhere — in my plant pots, my driveway, every aspect of my garden and every field I own. We’ve never had a problem before but now it’s like an invasion and it’s very dangerous.’

Because of the danger to livestock — if sufficient quantity is consumed it can cause irreversible cirrhosis of the liver in horses — HOEF is obliged by the Department for Environment, Food and Rural Affairs (Defra) to keep a 50-metre buffer zone between any ragwort and agricultural land.

But when I visit, there is no buffer in evidence around Lady Kilmaine’s land — some of which she rents out to local farmers. Instead the ragwort — raggedy and insidious — encroaches steadily from every direction.

So in early September she wrote to the trust in a panic, explaining the danger and requesting an urgent site visit.

Their reply was rather generic. ‘The Heart of England Forest recognises the important part ragwort plays in increasing biodiversity, providing a home and source of food to a large number of insect species, 30 of which rely on the plant as its sole food source and ten of which are so rare they are on the IUCN [International Union for Conservation of Nature] red list.’

They went on to accept that it did need controlling where appropriate and they would do so in line with DEFRA’s code of practice.

But, when no action was taken, Lady Kilmaine wrote back, more urgently, attaching photos.

Soon someone did come but, instead of digging it up and burning it, he set to the ragwort with a strimmer and left the dead heads lying in the sun where they’d been cut, perfect for self seeding, on land adjacent to one of her meadows.

‘They’re supposed to be ecologists!’ she says. ‘The CEO has a background in ecology!’

However, that CEO, Beth Brook, later tells me that the Trust has ‘very different views on ragwort’.

‘We do understand it’s an emotive subject, but it is very important for biodiversity,’ she says. ‘We’ve really thought this through.’

She insists that mowing or strimming is in line with DEFRA guidance — ‘We don’t used chemical control because of the damage it does to other wildlife’ — and that they also consider such factors as the prevailing wind and any physical barriers. Though in this case the only barrier is a simple wire and post fence.

Lady Kilmaine is not the sort to be fobbed off, however. This former midwife, medical secretary, charity fundraiser and mother of two is tough, fit — she still plays tennis and swims — and undaunted by the prospect of a bit of a battle.

So she did her own research. After 38 years of living in Shelfield, she knew pretty much everyone — including Dan Skelton, the racehorse trainer whose yard is in the village — and conducted a survey. It turned out that some other local landowners have the same problem. One farmer lost two whole fields of straw because of ragwort contamination.

The origins of the saga date back to 1995 when Felix Dennis began his mission to plant a new English forest — or as he once put it, a recreation of Shakespeare’s Forest of Arden, the inspiration for woodland scenes in plays such as A Midsummer Night’s Dream and As You Like It.

‘He’d made so much money out of publishing and paper that I think planting the trees was his way of giving it back,’ says Lady Kilmaine.

It certainly set him back more than the $100 million (£76 million) he spent on his own self-proclaimed ‘sex and drugs and rock’n’roll era’, which included a stint on the counter-culture magazine Oz.

It was there that Dennis had his run-in with the law after a 1971 issue, edited by schoolchildren, featured lesbianism and Rupert Bear as a sexual predator. 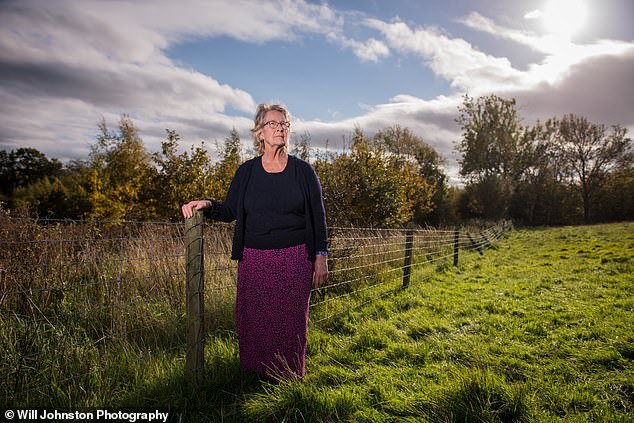 Lady Kilmaine is not the sort to be fobbed off, however. This former midwife, medical secretary, charity fundraiser and mother of two is tough, fit — she still plays tennis and swims — and undaunted by the prospect of a bit of a battle

After the longest-running obscenity trial in British history, Felix was sentenced to nine months, but had his conviction quashed on appeal. He went on to make his fortune in magazine publishing and the five residences he acquired included a thatched manor near his forest in Dorsington and, despite a loathing of both aristocracy and field sports, he became close friends with Lady Kilmaine’s late husband, John, 7th Baron Kilmaine, in 2013. ‘They got on like a house on fire and both loved poetry,’ she says. ‘He was so kind when John was ill. He was always sending poems. He was a nice man.’

Somehow, through his estate manager, she says, he also won over his neighbours by allowing hunting and shooting on his land. But, when he died in 2014, all that changed.

‘There has never been any consultation or communication,’ says a local who prefers not to be named. He lives near one of the two car parks which popped up several years ago and insists he was not aware of any consultation process — though the Trust insists there was such a process as part of the planning application.

One car park, locals say, was sited in a ‘moronically stupid location’, beside a listed bridge, by a blind bend and on a flood plain.

To be fair, this is not an unusual scenario for any rural pit-stop and the trust insists it took appropriate measures by introducing dusk lock-up times and low barriers.

Litter levels have also increased — particularly dog poo bags which are dumped everywhere and thrown into the fields.

Perhaps the real sadness here is not a few poo bags, a dead tree or ten, the nocturnal car-park activities, or even the dreaded ragwort, but how badly relations seem to have broken down between the trust and some locals.

‘I’m really disappointed,’ says Beth Brook ‘I thought we had a very good relationship with local people, we pride ourselves on it. But this is a small minority on a site of more than 7,000 acres and there may be other reasons.

‘The forest is an amazing public resource that has a huge benefit not just to climate change but to people’s wellbeing. But it is open to the public and not everybody likes that idea and I think that’s a shame.’

While not all the locals were fans of Dennis, insisting that he never had any real interest in the community and that his ‘Felix Forest’ was always a ridiculous vanity project, Lady Kilmaine remains faithful to her late husband’s unlikely pal.

‘I think he would be devastated,’ she says. ‘Absolutely devastated that the people who have lived here so long are up in arms and no one is listening.’

Well, hopefully they are now. Because if anyone can get them to sit up and pay attention, it’s Lady Kilmaine.