Bavaria has become the first German state to ban going outside in a bid to the spread of coronavirus.

It also emerged the whole country may face a national lockdown if they fail to obey instructions to stay indoors this weekend.

Germany has introduced sweeping measures to restrict public life in the face of the coronavirus pandemic but has stopped short of imposing a full-scale lockdown such as the ones in France, Italy and Spain. 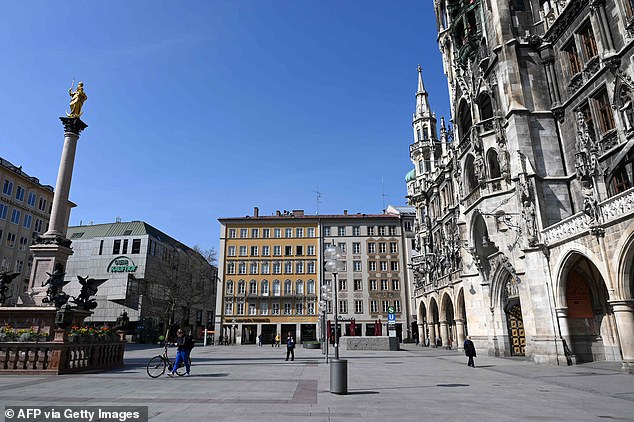 Only few people walk on at the Marienplatz square in Munich, Bavaria, today which is normally crowded but remains empty due to the coronavirus. The state will be the first in Germany to go into full lockdown 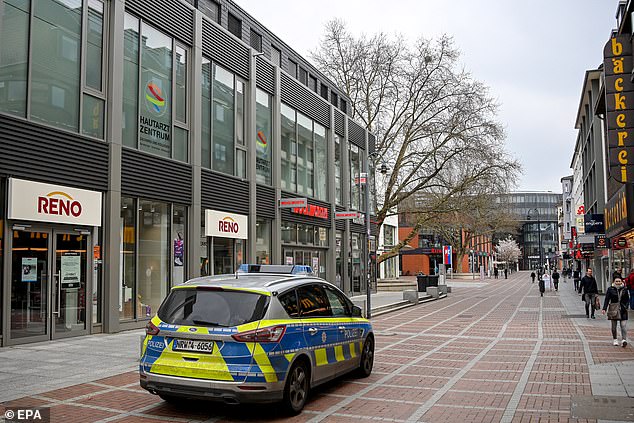 Police car patrolling as the local authority enforce prohibited meetings of two or more people in the open air in Leverkusen, Germany, today

‘We take these decisions according to the best of our knowledge and conscience. There will be a Bavaria after corona, but it will be a stronger one if we don’t look away.’

The German death rate of those infected with coronavirus is dramatically lower than many of the hardest hit nations, including Britain and especially Italy and China.

By utilising mass testing and having sufficient intensive care beds as well as ventilators, Germany has seen just 31 deaths, despite recording nearly 11,000 cases.

That figure gives Germany a death rate of 0.18 per cent, where as Italy’s has soared to 8.3 per cent while China’s was around 4 per cent at the height of the crisis.

Britain’s death rate from the contagion is 3.9 per cent, according to official figures. 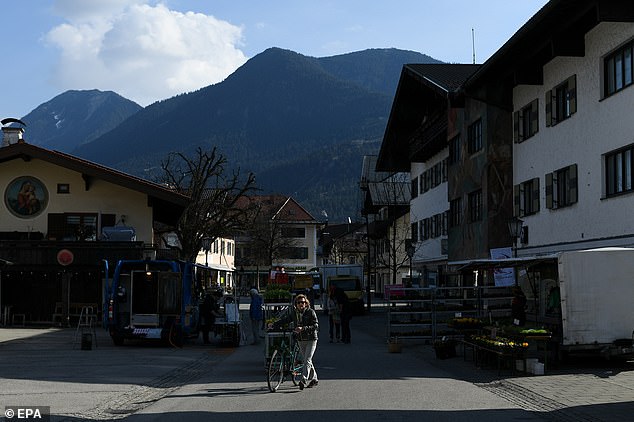 Shoppers visit the weekly market in Garmisch-Partenkirchen, in Bavaria, Germany, today. The state is to ban all non-essential outdoor movements 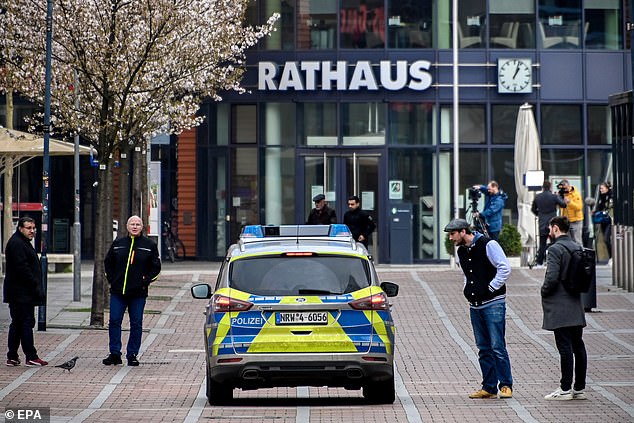 Police car patrolling as the local authority enforce prohibited meetings of two or more people in the open air in Leverkusen, Germany

As Germany consider taking further measures to restrict its citizens’ movements, Helge Braun, Chancellor Angela Merkel’s chief of staff, told Spiegel magazine: ‘We will look at the behaviour of the population this weekend. Saturday will be a decisive day.’

Merkel is expected to meet regional state premiers to discuss a potential lockdown on Sunday, as concern grows that the public are not heeding government calls to stay home in the crisis.

‘We hope that the population understands the current measures and is ready to scale down social life. If we look at neighbouring countries, it’s clear that (lockdown) would be an enormous extra burden,’ said Braun.

Yet he warned that more stringent measures could be introduced if citizens continued to meet in public.

All bars, clubs, leisure centres and non-essential shops have already been shut.

Many states have banned large gatherings and Merkel and other leaders have called on the public to stay at home.

Yet many people are continuing to meet in parks and on the streets, with some even organising so-called corona parties, prompting state premiers to warn that lockdown would be the next logical step. 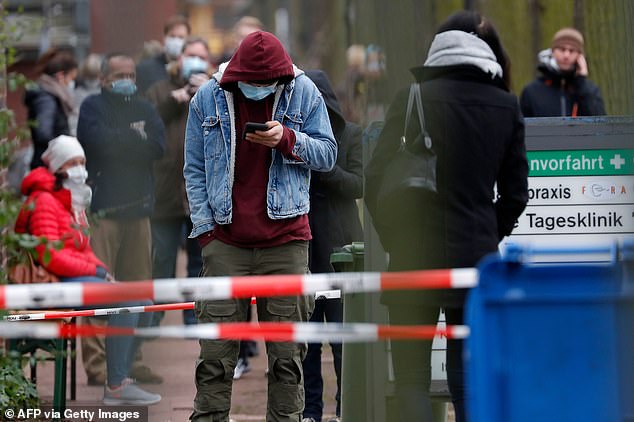 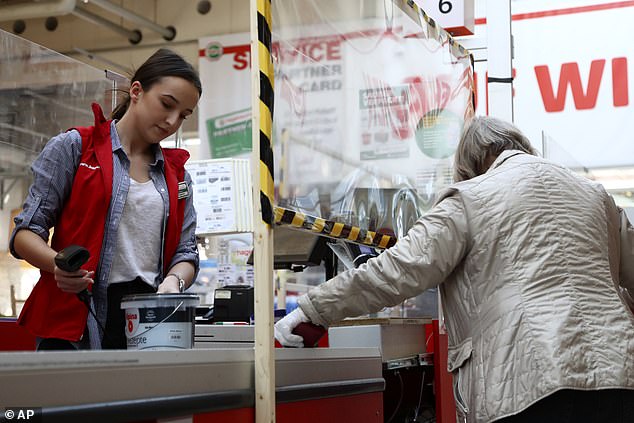 ‘Unless everybody fundamentally changes their behaviour, then we won’t be able to avoid harsher measures and sanctions,’ said Winfried Kretschmann, state premier of the southwestern state of Baden-Wuerttemberg.

‘If people don’t do it themselves, then we could make such decisions,’ said Armin Laschet, leader of Germany’s most populous state North-Rhine Westphalia, which has been worst hit by the virus so far.

Germany’s federal system means that the decision to go into lockdown has so far been taken at the state or even the local level.

Freiburg in Baden-Württemberg became the first city to impose a general ban on leaving the house on Thursday, and North-Rhine Westphalia’s Leverkusen banned meetings of ‘two or more people in the open’ on Friday.

Yet the issue remains divisive, with Berlin mayor Michael Mueller warning on Friday that lockdown was ‘not a panacea’.

Saarland’s state premier Tobias Hans, meanwhile, reiterated that this weekend would be ‘decisive’ ahead of Sunday’s talks, and called for a nationwide solution.

If people continued to ignore the current regulations ‘then we will need further-reaching measures nationwide,’ he told public broadcaster ARD.