The BBC weather forecaster warned temperatures will plunge into minus figures as New Year’s Eve celebrations unravel across the country. Carol Kirkwood warned it will be foggy and cloudy overnight but will remain fairly dry for most people. She said: “For midnight, if you are outside celebrating, we can see some breaks in the clouds in Plymouth and also in parts of the Midlands.

“But there is a lot of cloud.

“Where we see the breaks in the cloud in the east it will be chilly, so wrap up warmly.

“And you can see Northern Ireland, western and northern Scotland also fairly cloudy.

“And for the northern and western isles it’s also going to be rather windy. 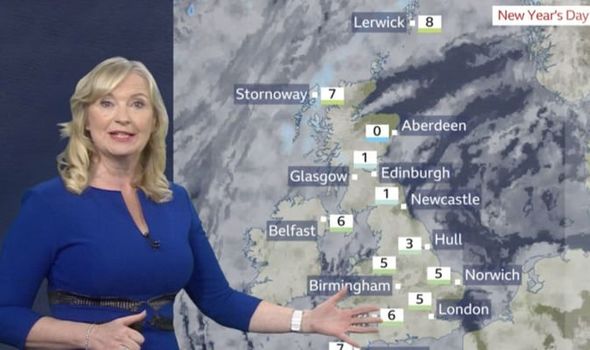 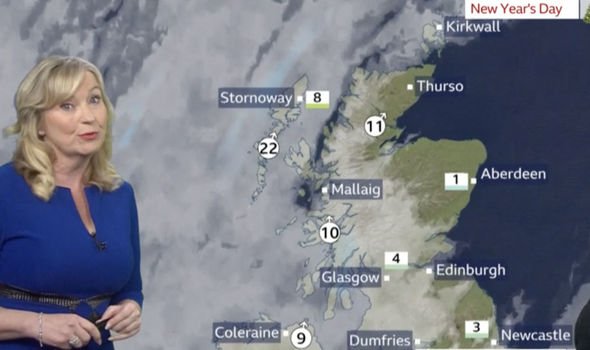 “If you’re celebrating in Thurso or Aberdeen it will be cold, there will be some frost around and pockets of fog to watch out tonight.

“And if you are celebrating, do have a fab time!”

However, according to the Met Office, the UK could see unseasonably warm weather going into the new year, with highs of 16C in some areas.

This bout of warm weather is due to an air mass spreading across Britain from the Azores.

The warm weather is forecast to remain for a while as an area of high pressure is trapping the warm air in a so-called ‘heat-bubble’.

These temperatures could cause the UK to see the warmest New Year Day in 178 years.

It will feel cold on Friday, January 3 with a band of rain continuing to clear southeastwards across the UK.

However, this will be followed by clearer skies and showers.

There is a risk that these showers could turn wintry across northern areas, meaning some could see snow or even sleet. 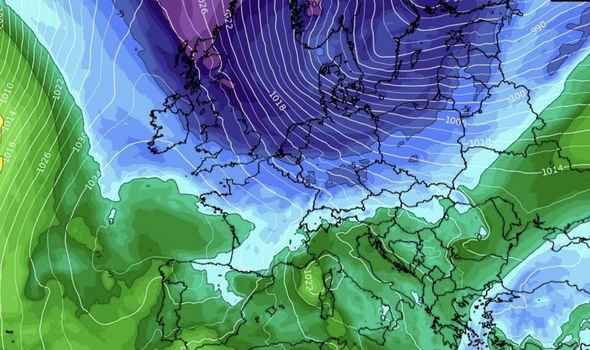 It will be windy, with the chance of gales in the north of Scotland and northeast England.

Looking further ahead into that week, the Met Office predicts somewhat of a northwest/southeast split.

The majority of the wet and windy weather seems to be confined to the northwest, with spells of heavy rain and strong winds.

The region may also see some showery interludes with possible snow over the northern hills.