Europe has faced miserable weather over the past few days as an area of low pressure swept in over the continent and unleashed heavy downpours and strong winds. BBC Weather forecaster Louise Lear warned the “intense downpours” will continue through Wednesday and into Thursday. She said: “Heat, humidity and thundery downpours were very much a feature across central and eastern Europe at the moment.

There will be some intense downpours across the Alps as well

“It looks likely to continue for the next few days. Now, the satellite picture is picking up some shower cloud or some heavier bursts of rain across the UK.

“But these shower clouds will really start to get going across central Europe as we go through the day.”

The heaviest of the showers on Thursday are set to be across the Low Countries, Germany, and into central Europe while the Mediterranean looks fine, settled and predominantly sunny.

The BBC forecaster added: “We will also see some heavier rain across central and eastern areas of Turkey. 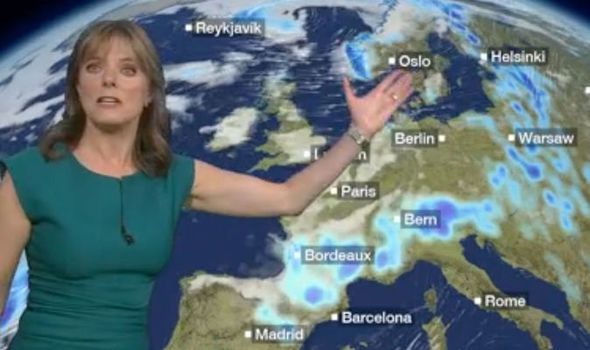 “It’s not looking too bad across the Greek Isles, the Balkans though and up into Romania, Bulgaria, that’s where we have seen heavy rain and localised flooding.

“There will be some intense downpours across the Alps as well. But for much of central and southern Spain and Portugal, fine and settled.

“22C in Paris and it should be a slightly quieter than we have seen earlier on in the week.”

The thunderstorms are set to continue moving across the continent, striking Poland, down into central Europe, through the Alps as well.

But there is a sign that weather conditions will pick up, with a clear divide between sunny summer weather and thunderstorms. Ms Lear added: “The Mediterranean and the dividing line between this dry, settled and sunny theme.

“So, some holidaymakers will be happy with that forecast.

“Not looking too badly into Madrid and Rome – just the risk of some showers perhaps into Paris after a largely dry and warm weekend.

“Eastern Europe still keeps that heat going – 31C in Kiev for the weekend.”

Meanwhile, in the UK on Wednesday, tornadoes could hit south-east England as severe weather conditions forced the Met Office to continue its weather warnings through the day.

Thunderstorms will bring torrential rain, hail and lightning to parts of the UK on Wednesday and an expert is now warning tornadoes could batter some areas as well.

The Met Office has continued its weather warnings for thunderstorms from Tuesday which will be in effect until 9pm tonight.

And a storm chaser is now warning a severe thunderstorm and a “significant tornado” could hit Kent.

Tony Gilbert, spokesman for the Tornado and Storm Research Organisation, said that due to a number of specific weather conditions, there is potential for a supercell occurring in Kent and Sussex.

A supercell is a storm often referred to as rotating thunderstorm because of its persistently rotating updraft.