BBC Weather forecaster Helen Willetts warned a swathe of cloud will engulf Britain tomorrow and result in thundery downpours and strong winds. Ms Willetts said: “Once the fog does clear, the day tomorrow looks a little cloudier on the whole with more showers around. That’s because our weather front is making its steady progress eastwards. But it is tending to break up so the sunshine will punch through those clouds and what that does is give more energy to that cloud and that moisture so we will find some big showers and some thunderstorms developing come the afternoon – not for all but there will be some lively downpours and gusty winds near those showers.”

The BBC forecaster warned there will showers around for Northern Ireland, northern, southern and central England.

She added: “As we follow the progress of that weather front or showers through Wednesday night and into Thursday, it tends to ease away for a time but then we have got this line of cloud approaching from the north and that is going to bring a subtle change later on Thursday.

“But ahead of it, once again, push that strong May sunshine into the equation and we will have some big showers and some lively downpours with hail and thunder.”

But Ms Willetts warned it will feel “like a different season” by Thursday evening and into Friday as temperatures drop and an Arctic airflow pushes in across the UK. 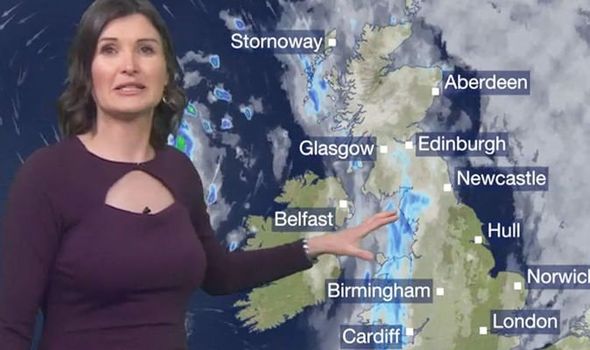 She said: “Friday in the showers in the north could well be a wintery day. As you can see, those showers mostly over the hills the wintery showers.

“But it is going to feel colder for all of us with temperatures barely making double figures for many parts of northern England, Northern Ireland and Scotland and you add on the effect of that strong northerly wind and it will feel significantly colder.

“So, it will feel as if we have stepped back towards winter. Therefore, Friday night will be cold with a widespread frost come Saturday morning and in fact Sunday morning as well.”

The Met Office also warned Britain is set for a bout of “much colder” weather towards the May Day bank holiday weekend.

The outlook is a stark contrast from the balmy sunshine enjoyed by millions across the nation over Easter.

“So where we see a little bit on Wednesday temperatures could get into the mid to high-teens.

“But overall a coolish feeling day on Wednesday and on Thursday as well more heavy showers around on Thursday.”

Concluding his forecast, Mr Deakin said: “It looks like quite a bit colder by the time we get to Friday.”