Began nurse training at The Alfred in 1948

War, music and medicine were the pillars shaping the lives of Lilli Stahr and her family. Lilli’s father, Hermann, was born in Lille, France, son of the German consul to Lille in 1868. A professor of medicine and very musical, his two aunts had music lessons from Franz Liszt. Lilli’s mother, Margarete Emmel, was born in Peru in 1892, to German parents.

The family owned a tannery and sold cocaine to the dental industry in Germany, so Margarete lived in Peru for her first four years before returning to Hamburg for school. As a teenager she had a year at school in England.

Lilli’s family lived in the free state of Danzig, established under the Treaty of Versailles after WWI. The free state was established to give Poland access to a deep-water port but the local population was 95 per cent German. Lilli advised “…never live anywhere strategic…”. Life was good in Danzig in 1920: Professor Stahr was director of pathology at the City Hospital in Wrzeszcz in Danzig. On October 11, 1920, Mrs Stahr completed their family by having twins – a boy, Joachim Georg Ferdinand Adolf, born 30 minutes before his sister Lilli Charlotte Auguste. They would be good company for their older brother.

In 1933, life started to change. Every German household had a copy of Mein Kampf – couples were given a copy at their wedding – but not many people actually read it. Mrs Stahr read the book cover to cover and had a good idea of what was to come, given that Dr Stahr’s mother was Jewish and the family were designated as such.

The children were allowed to study but never to qualify or pass exams. Mrs Stahr was determined that her boys were not going to be “cannon fodder” and risked her life to get them out of Danzig.

In 1938, arrangements were made for them to go to Copenhagen and from there the eldest son was sent to Peru to work with her family. Lilli’s twin brother was sent to England to finish school and study engineering. Lilli had been studying music after leaving school but two weeks before war was declared in 1939, she was sent on the last train allowed out to Budapest, about 1000 kilometres away. Lilli and her parents thought it was the last time they would see each other. It was the only time she saw her father cry.

Meanwhile, on February 28, 1940, Lilli’s twin in England was interned – as were all Germans – and put on a ship to Canada but the ship was torpedoed and he was lucky to survive. The survivors were put on another ship and told nothing of their destination. His life was tough – armed guards with fixed bayonets brutalised them and threw their papers overboard. Watching the stars, they worked out they were being sent to Australia arriving on September 9, 1940. He was a Dunera boy.

After five years in Hungary, teaching preschool children music and German, one Sunday in 1944 Lilli discovered the city was full of beige German army vehicles – sent from the African desert campaign. The Germans had invaded Hungary. A German soldier helped Lilli. He took her passport and replaced it with a single written page that allowed her to leave the country safely.

Lilli took off home. Catching the train going via Vienna, she had to overnight there due to bombing raids. The station was completely dark; all she could see were the search lights scanning the night sky. Managing to reach Danzig safely, Lilli worked for a while at the hospital with her father in the pathology department. She loved the work. Then the Russians were coming and the family had to flee Danzig. A German officer helped them escape. Allowing one night to decide what they could take with them, he drove them to the hospital where they hid in slit trenches until they could escape by train to Berlin, which had been devastated. The family moved to Hamburg, where life was hard. Dr Stahr died of malnutrition and exhaustion on August 20, 1947, and Lilli began her nurse training at the local hospital. From here she and her mother decided to join Joachim in Australia. They arrived on February 27, 1948, designated as “non-obnoxious aliens” by a note left clipped to their application forms.

Lilli quickly applied to do her nurse training and began at The Alfred in 1948. Language was a huge problem and she always had her dictionary close at hand. Working incredibly hard, Lilli achieved good marks – life wasn’t easy and some staff refused to work with a German, but she found that for everyone who was rude or disparaging, someone else would be kind and helpful. Lilli trained to be a midwife at the Queen Victoria Hospital followed by infant welfare training at the Queen Elizabeth Maternal and Child Health Centre, Carlton. 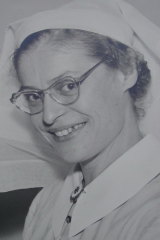 In 1953, Lilli returned to The Alfred, where she worked until her retirement in 1986. After a few years of ward work and rising to the level of charge sister, she moved to the work she really wanted to do – teaching nurses in the School of Nursing. Every student nurse at The Alfred from that time knew Lilli Stahr. Bandaging “…from wizin to wizout…” hot spoon eye bathing, bed making “… no, no girls, do it again…” to ophthalmics to her now legendary portrayal of the uterus. Lilli stood at the front of the class, leaned forward to a 45-degree angle and announced “I am the uterus” whereupon she would throw her red cape (part of her uniform in those days) over her head proclaiming it to be the broad ligament. Thrusting her arms out on each side “…these are the fallopian tubes…” then wiggling her fingers announced them to be the fimbriae.

Retirement was busy. Able to concentrate on the music she loved, in 2013 at a sprightly 93 she was living on her own in her unit, having piano lessons every week and learning Spanish and French at U3A. She had family in Melbourne and Peru to visit and was trying to learn about computers – a three-year project she felt. Moving into aged care for the last few years Lilli passed away peacefully on September 16, 2020, aged 99 years, 11 months and five days.

Vale Lilli and thank you.

Pru Cox is president of the Alfred Hospital Nurses League. Most of this tribute is from an interview with Lilli in 2013 for an article in the league’s newsletter, Nursing Notes, in September 2013.