Beijing: The Chinese government has joined the chorus of countries accusing the US of double standards, by comparing the storming of the US Capitol by supporters of President Donald Trump and last year's often-violent pro-democracy protests in Hong Kong, but noting that no one had died when demonstrators took over the legislature of the China-ruled city.

Clips of the chaotic scenes from Washington have aired repeatedly on Chinese state television.

Chinese Foreign Ministry spokeswoman Hua Chunying told a daily briefing that while events in Hong Kong in 2019, when the city's legislature was stormed, were more "severe" than those in Washington, "not one demonstrator died". 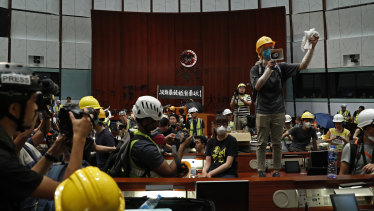 Student protesters break into the Hong Kong Legislative Chamber to protest against an extradition bill in July 2019.Credit:AP

Relations between Beijing and Washington are at their worst in decades over a range of disputes, including China's heavy clampdown on Hong Kong, and Chinese diplomats and state media often draw attention to news of gun violence and chaos in the United States.

Months of anti-government protests in Hong Kong in 2019 included the July 1 storming of the city's legislature, in a campaign for democratic reforms that Beijing ultimately quashed with new national security legislation. One man died after falling from a parking lot during an earlier protest in the city. 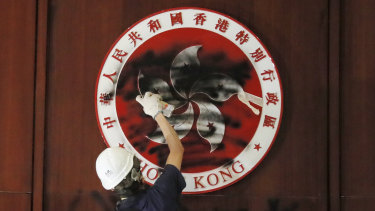 A protester defaces the Hong Kong emblem after breaking into the Legislative Council building on July 1, 2019. Protesters took over the legislature’s main building, tearing down portraits of legislative leaders and spray painting pro-democracy slogans on the walls of the main chamber.Credit:AP

Four people died and 52 were arrested after Trump supporters stormed the US Capitol in an attempt to stop Congress from certifying President-elect Joe Biden's election victory – a woman was shot and three others died of medical emergencies according to Washington police. A fifth reported death, of a police officer, was later denied by officials.

"We also wish that US people can enjoy peace, stability and security as soon as possible," Hua said.

Hua also condemned US Secretary of State Mike Pompeo's comments in which he said Washington may sanction those involved in the arrest of more than 50 people in Hong Kong and would send the US ambassador to the United Nations to visit Taiwan.

A comment with thousands of favourable votes on China’s Twitter-like Weibo said the Washington protests were “over 90 per cent” the same as those in Hong Kong. European leaders were showing “double standards” in condemning one but not the other, it said.

"The response and words used by some in the US to what happened in Hong Kong in 2019 were completely different to what they used for today's ongoing events in the US," Hua said. 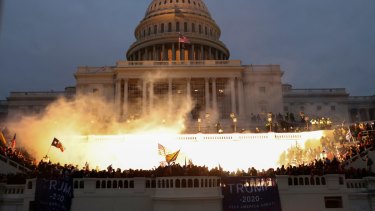 An explosion caused by a police munition is seen while supporters of US President Donald Trump storm the Capitol building. Credit:Reuters

Meanwhile, Hong Kong police arrested already-jailed Hong Kong pro-democracy activist Joshua Wong on a new charge under the national security law while an American rights lawyer who was detained in a sweeping crackdown was granted bail.

Friends and family of Wong, who is serving a 13½-month prison sentence for organising and participating in an unauthorised protest in 2019, were informed that he had been arrested on suspicion of violating the law and was taken away to give a statement on the new charge, according to a post on his Facebook page.

The post also stated that Wong's lawyer was unable to meet with him, and that Wong had been transferred back to prison after giving the statement, which was not disclosed. 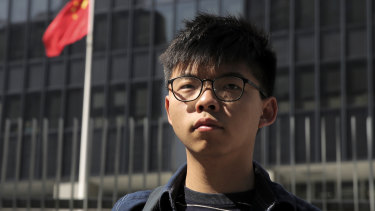 Activist Joshua Wong was jailed on suspicion of violating the national security law.Credit:AP

Separately, John Clancey, an American human rights lawyer who works at law firm Ho Tse Wai & Partners, was granted bail, his associate said. He was one of 53 activists arrested on Wednesday under the national security law. He couldn't be reached for comment.

At least some of the others were released on bail late on Thursday from various police stations where they had been held.

Around the world, leaders including French President Emmanuel Macron and British Prime Minister Boris Johnson expressed shock and concern about the US Capitol riots, condemning the attempted subversion of democracy.

"What happened today in Washington DC is not American, definitely," Macron said in a video message in English.

"Some of my friends ask whether someone will distribute crackers to the protesters to echo the Victoria Nuland stunt," he tweeted, citing a 2013 visit to Ukraine when then-U.S. Assistant Secretary of State Victoria Nuland offered food to protesters.

Turkey and Venezuela took shots at the US for preaching democratic elections abroad but being unable to manage its own affairs at home.