Beijing shuts roads and public spaces due to pollution

Highways, school playgrounds and public spaces have been shut in Beijing as parts of northern China were blanketed in heavy pollution – days after the COP26 summit.

Teachers in Beijing were ordered to halt physical education lessons and keep pupils indoors while construction sites were closed and some factory activity halted as a thick blanket of smog fell on the city Friday.

Roads in the capital were also forced to close, while highways were also shut in the cities of Shanghai, Tianjin and Harbin after visibility fell to less than 200 yards.

It comes just days after Xi Jinping skipped the COP26 climate summit while refusing to make any new commitments on reducing China’s emissions, and weeks after he ordered his country to ramp up coal production to fix an energy crisis. 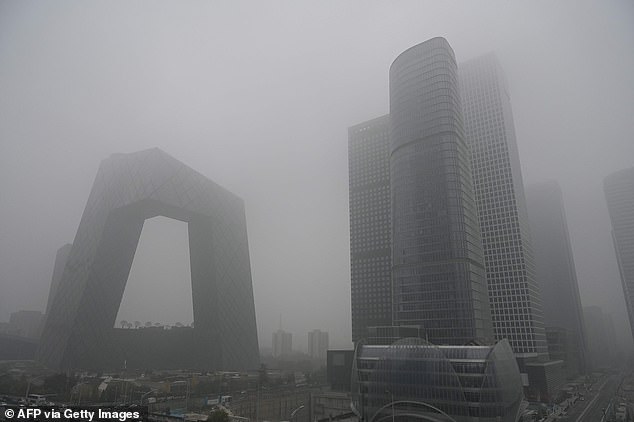 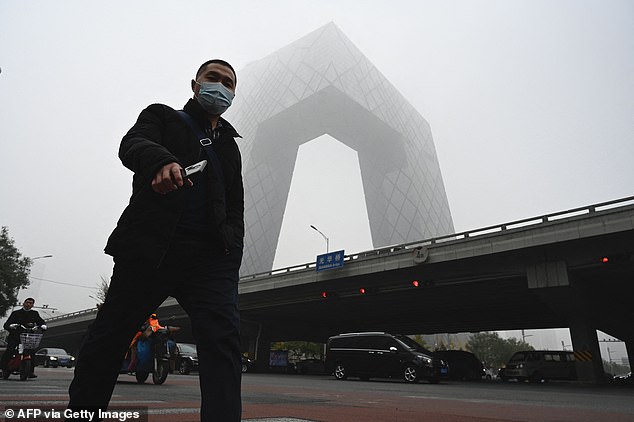 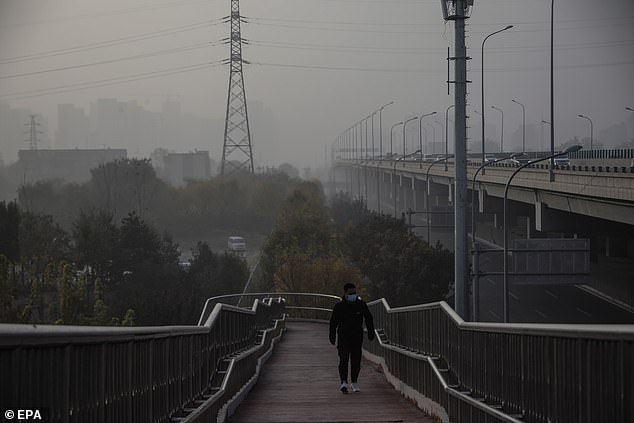 Beijing and surrounding regions are prone to smog during the winter months due to pollution form nearby coal power plants (pictured, a man walks in the smog in Beijing)

Beijing officials blamed the smog on ‘unfavourable weather conditions’ which they said had contributed to ‘regional pollution spread’.

Pollution levels are expected to remain dangerously high in the region until Saturday evening, when a weather front arriving from Siberia will blow it out to sea.

Pollutants detected Friday morning by a monitoring station at the US embassy in Beijing reached levels defined as “very unhealthy” for the general population.

Concentrations of particles knowns as PM2.5, which are the smallest and most-harmful form of pollution for humans because they can filter deep into the lungs, were registered at 220 micrograms per cubic metre of air on Friday.

The WHO defines a ‘safe’ level of PM2.5s as 15 micrograms per cubic metre of air.

The heavily industrialised Beijing-Tianjin-Hebei region often suffers from heavy smog in the fall and winter, especially on days without wind.

In February, the region will play host to the Winter Olympics.

China is the world’s biggest producer and consumer of fossil fuels, and has made only weak commitments to reduce its use in the coming decades.

Most countries have signed up to pledges to cut carbon emissions by 2030 with a goal of reaching ‘net zero’ by 2050.

But China has only committed to peaking its use of fossil fuels by 2030, and will go ‘net zero’ by 2060 – a decade later than most.

Of particular concern for both human health and the health of the planet is China’s heavy reliance on coal, the most-harmful of traditional fossil fuels.

The country relied on the fuel for around 70 per cent of its energy in 2020, and while it aims to cut that figure this year it is still set to account for more than half.

Xi recently ordered the country’s coal mines to ramp up production and is planning the construction of more coal-fired power plants in the coming years.

It comes after parts of China suffered energy shortages and blackouts, caused by a spike in demand as the economy reopened post-Covid. 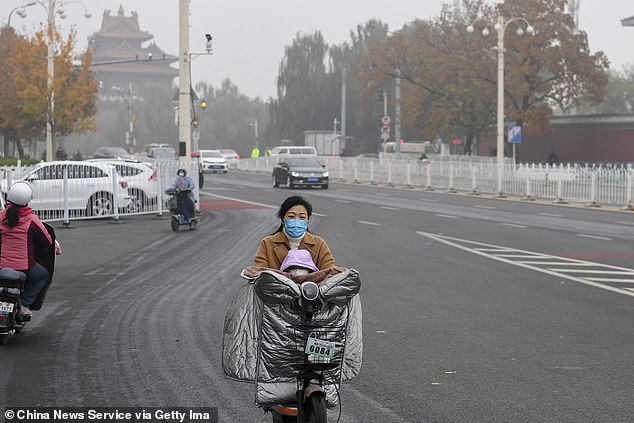 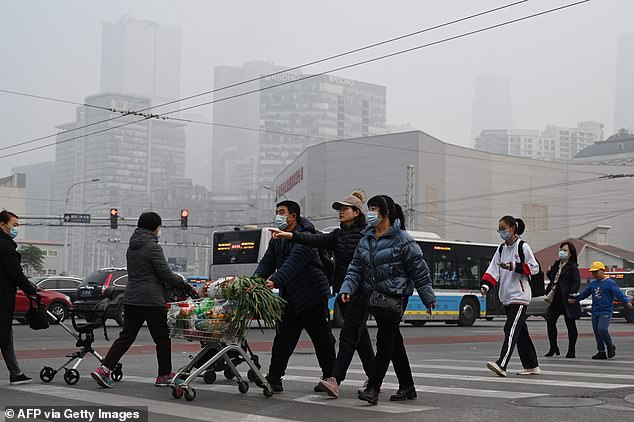 People walk through smog in Beijing on Friday morning, as city officials warn pollution level will be dangerously high until at least Saturday evening A man looks at his phone as the Beijing skyline disappears into a thick cloud of smog behind him, which local officials blamed on the weather Xi also opted to skip the recent G-20 summit in Rome and COP26 conference in Glasgow, during which world leaders made new commitments on cutting emissions.

Instead, the Chinese leader submitted only a written statement in which he made no new commitments to reduce China’s reliance on fossil fuels.

Though global action is needed to tackle climate change, experts agree that without China’s cooperation all current targets are likely to be missed – potentially causing catastrophic changes in the way the climate operates.

China has historically emitted less than western nations because it industrialised decades later than they did.

But since Mao’s Great Leap Forward began in the 1960s, China has expanded its use of industrial technologies so rapidly that it now ranks among the most-polluting countries even when historic emissions are taken into account.