Chinese troops have started removing tents and other structures from a contested Himalayan valley where they fought a deadly battle with Indian soldiers last month.

20 Indian soldiers were killed in brutal hand-to-hand fighting on June 15 in the Galwan Valley in Ladakh, sending tensions soaring between the nuclear-armed neighbours. China has acknowledged it suffered casualties but not given figures.

The two sides have since held military and diplomatic talks and said they want a negotiated settlement.

China’s People’s Liberation Army soldiers were ‘seen removing tents and structures’ and there was a ‘rearward movement’ of military vehicles in the Galwan Valley, an Indian army source told AFP on Monday. 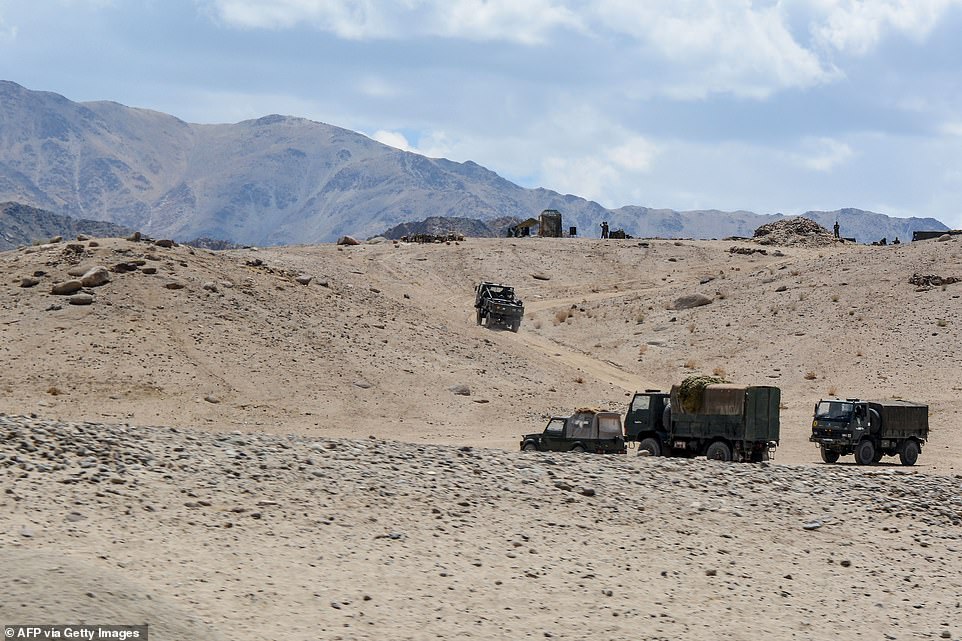 Chinese troops have started removing tents and other structures from a contested Himalayan valley where they fought a deadly battle with Indian soldiers last month. Above, Indian Army personnel drive vehicles as they take part in a war exercise at Thikse in Leh district of the union territory of Ladakh on July 4 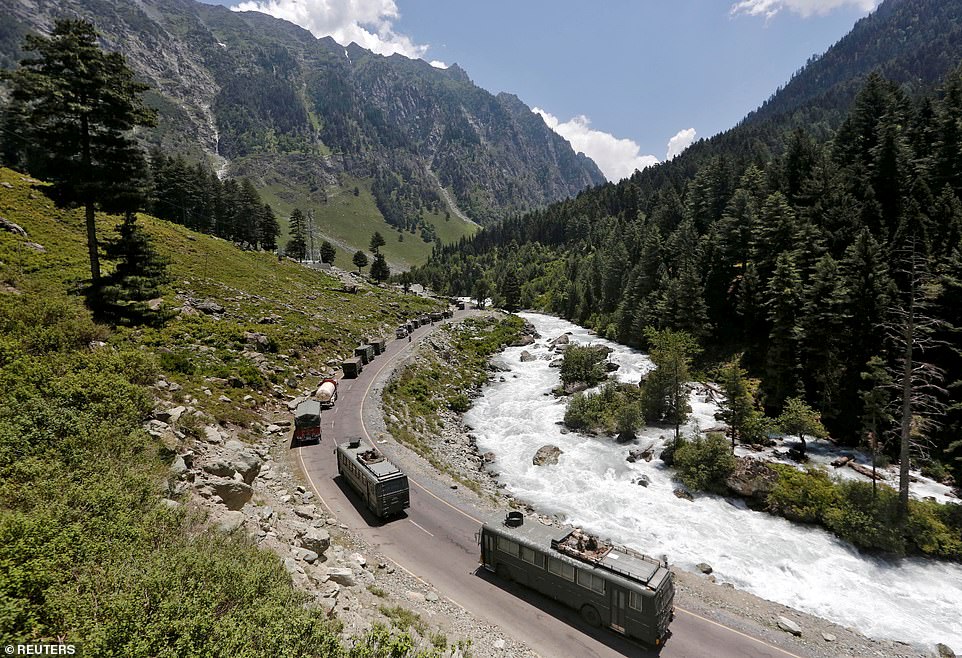 20 Indian soldiers were killed in brutal hand-to-hand fighting on June 15 in the Galwan Valley in Ladakh, sending tensions soaring between the nuclear-armed neighbours. Above, an Indian Army convoy moves along a highway leading to Ladakh, at Gagangeer in Kashmir’s Ganderbal district 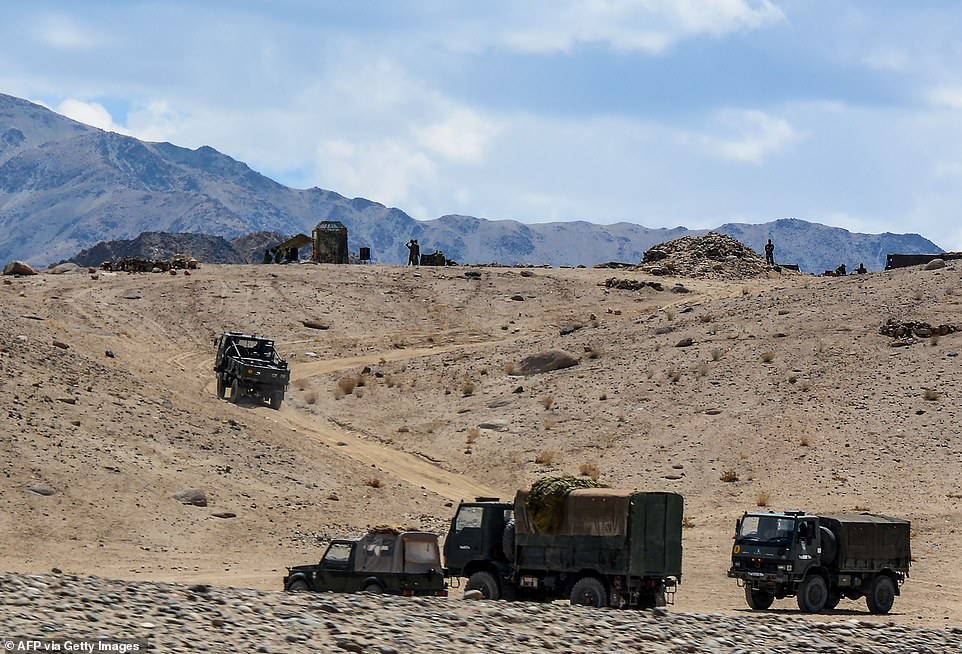 China’s People’s Liberation Army soldiers were ‘seen removing tents and structures’ and there was a ‘rearward movement’ of military vehicles in the Galwan Valley, an Indian army source told AFP on Monday. Above, Indian army soldiers drive vehicles along mountainous roads as they take part in a military exercise at Thikse in Leh district of the union territory of Ladakh on July 4

‘Disengagement with the PLA has started as per agreed terms in the Corps Commanders’ meeting,’ the source added.

The source said the Indian army was ‘verifying’ how far back Chinese forces had withdrawn.

There was no comment on whether there was a similar withdrawal by Indian troops.

Chinese foreign ministry spokesman Zhao Lijian told reporters in Beijing on Monday that both sides had made ‘positive progress… to disengage frontline troops and ease the border situation’.

‘We hope that the Indian side will go with the Chinese side to implement the consensus reached by both sides with practical actions,’ Zhao added.

The Galwan Valley incident was the first time in 45 years that soldiers had died in combat on the Asian giants’ long-disputed border.

India and China fought a war over the frontier in 1962. 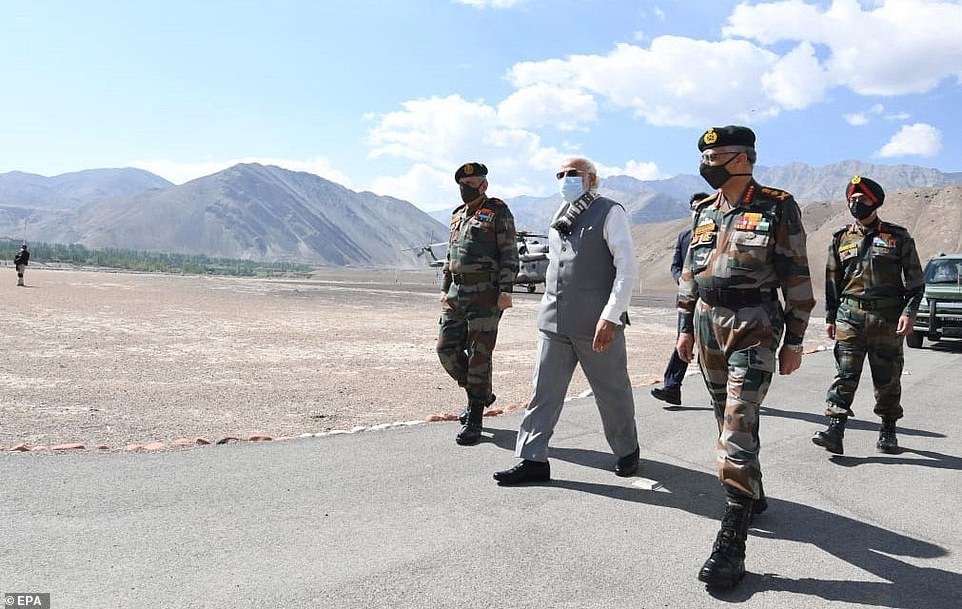 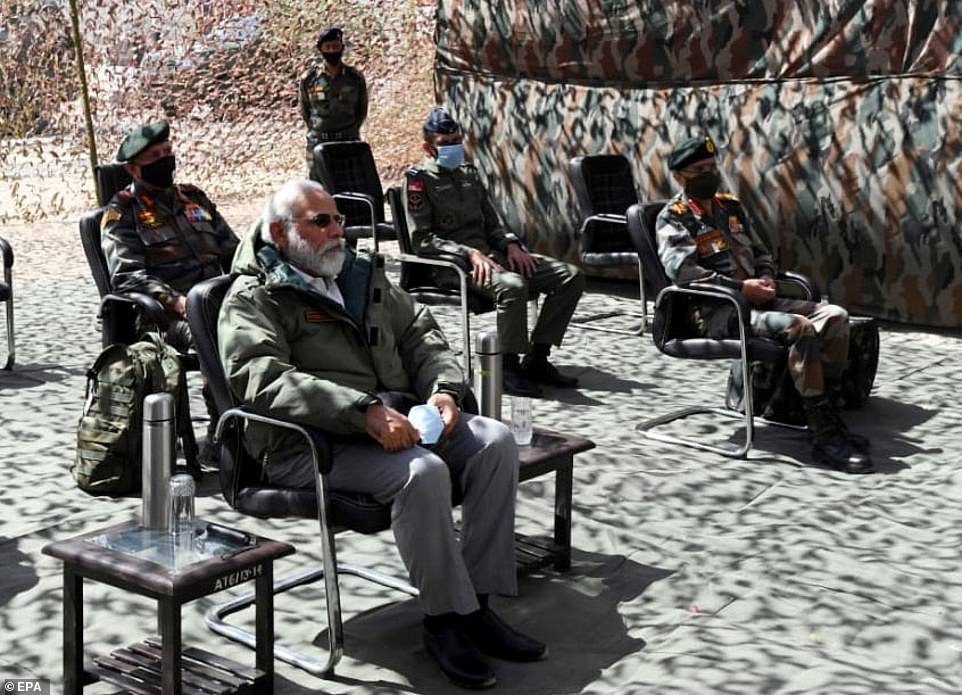 Prime Minister of India Narendra Modi and top Indian army officials in Leh, Ladakh, India. Indian Prime Minister Narendra Modi made an unannounced visit Friday to a military base in a remote region bordering China where troops from the two countries have been facing off for nearly two months 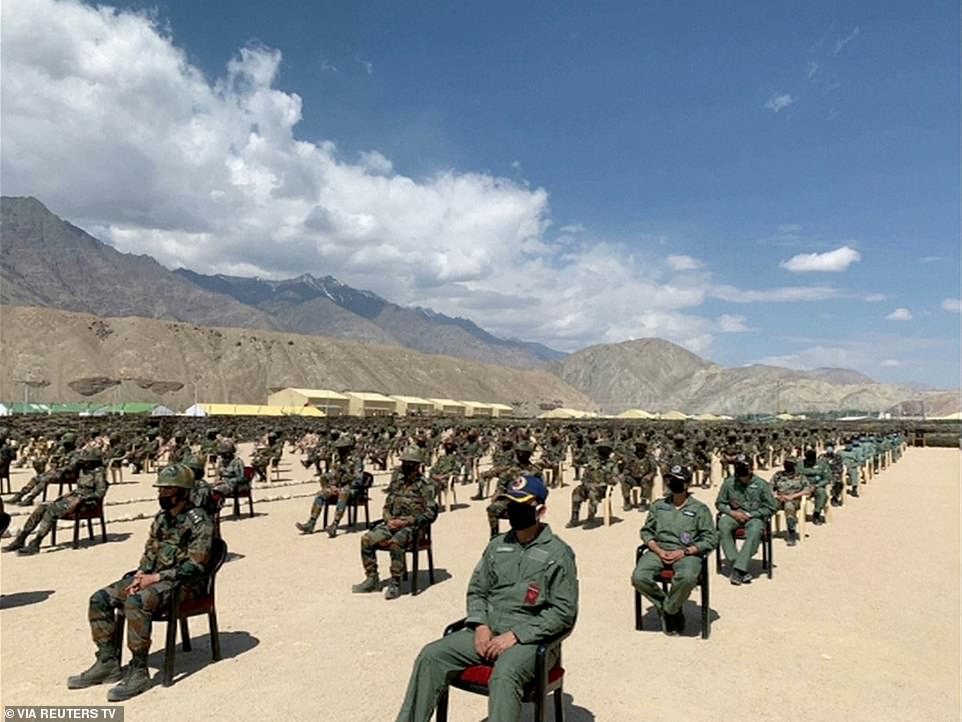 Anti-China sentiment has been growing in India since the high-altitude clash, with the government banning Chinese mobile apps including the wildy popular TikTok.

Indian Prime Minister Narendra Modi made an unannounced visit Friday to a military base in a remote region bordering China where troops from the two countries have been facing off for nearly two months.

Modi, accompanied by India’s military leadership, interacted with troops in Ladakh region. A photo on his Instagram account showed him sitting in a camouflage tent at the base. ‘Interacting with our brave armed forces personnel,’ he wrote.

Modi chanted ‘Long live mother India!’ while addressing troops at the Nimu military base, insisting that ‘after every crisis, India has emerged stronger.’

He praised the valor of Indian soldiers and said: ‘Enemies of India have seen your fire and fury.’

‘Days of expansionism are over. Expansionism creates danger for world peace. This is an era of development. Expansionist force have either lost or forced to turn back,’ he said in an oblique reference to China.

It comes after China appeared to be building new structures near the site of a deadly border clash with Indian troops last month – despite both sides pledging to ‘disengage’.

Satellite images taken on June 22 showed what appeared to be a new Chinese encampment and road under construction on a terrace overlooking a bend in the Galwan River, where previously there was nothing.

Meanwhile defensive positions appeared to have been built on the Indian side, and a nearby forward operating base appears to have been significantly scaled back when compared with images taken of the same area on March 22. 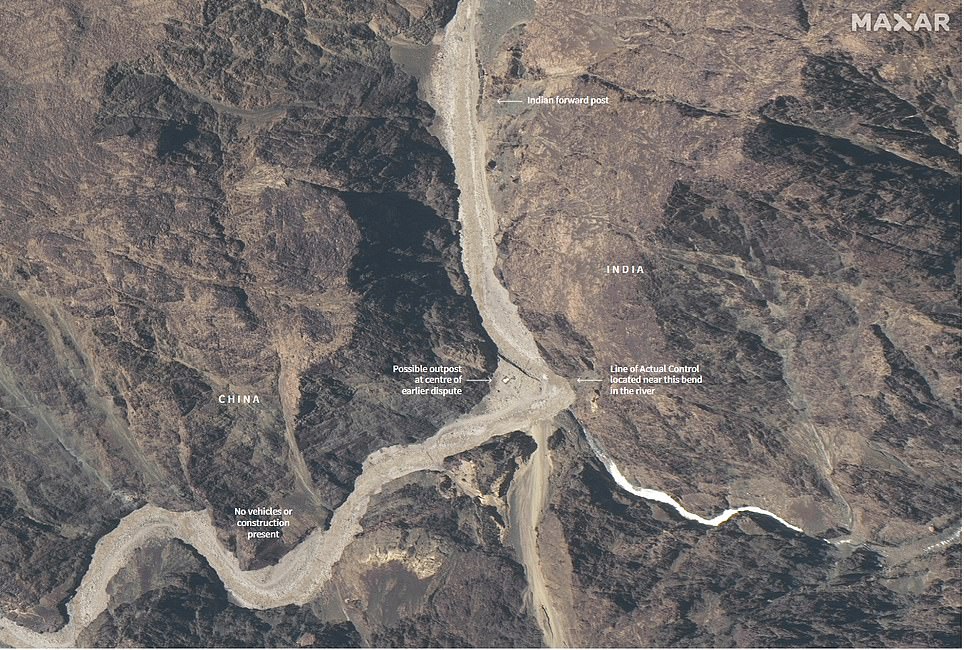 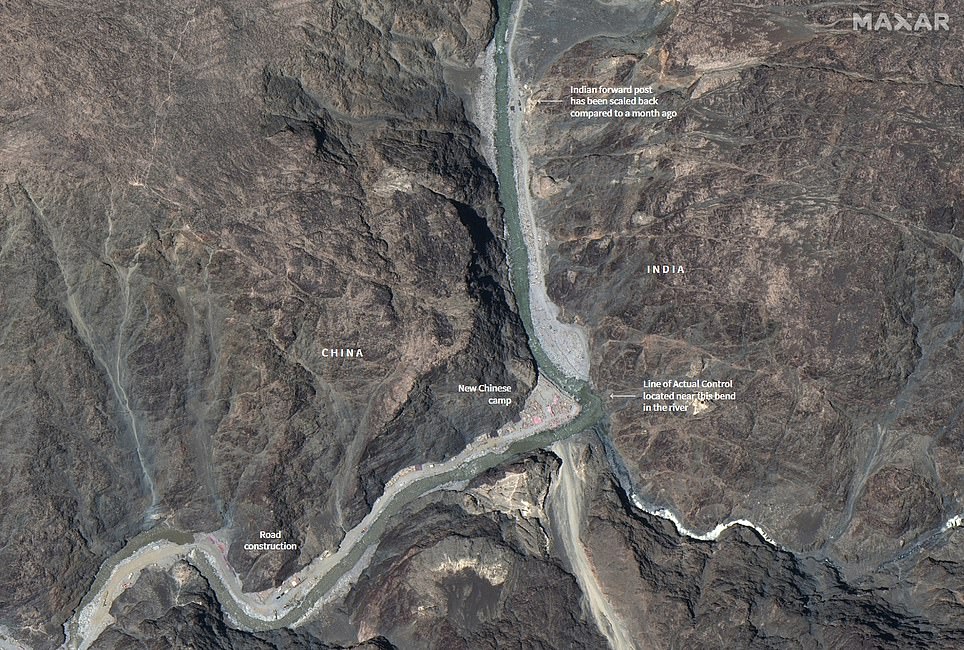 Escalating tensions: The left-hand satellite image shows a region of the Galwan Valley on May 22, before clashes between Indian and Chinese troops, where there appears to be a single structure with a large Indian base nearby. The image on the right shows the same area on June 22, with a new road and camp on the Chinese side, and what appear to be new defensive positions on the Indian side along with a much-smaller base 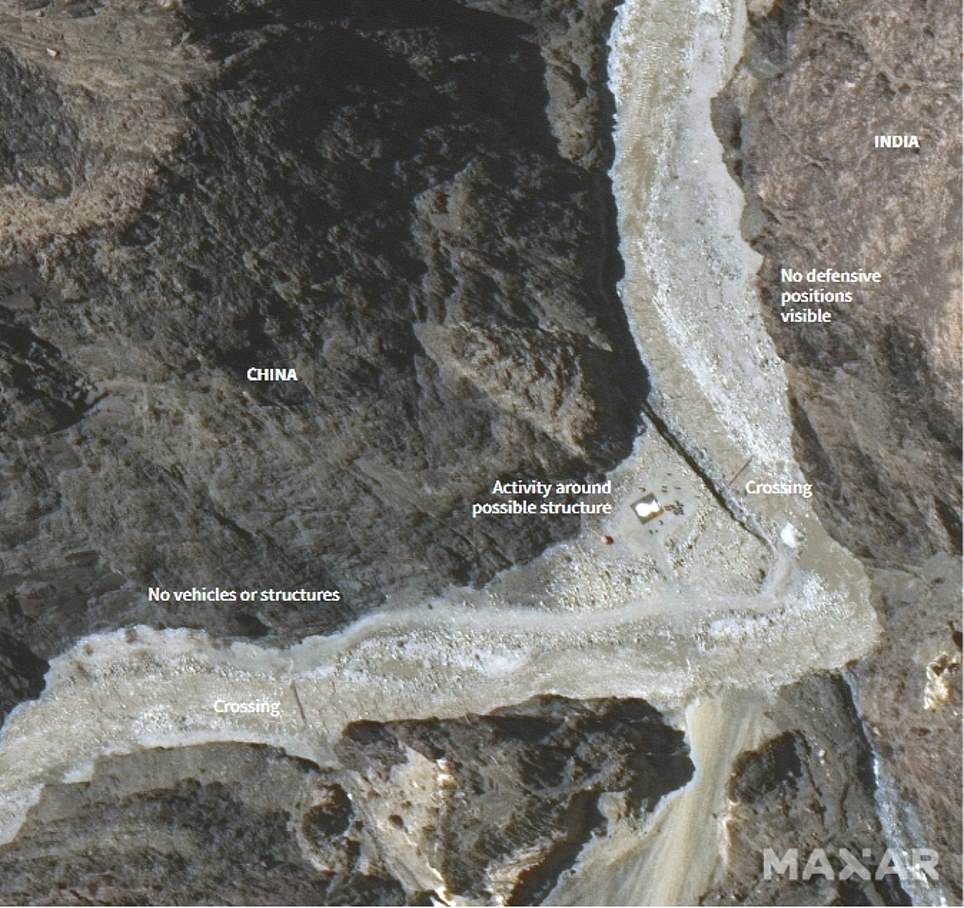 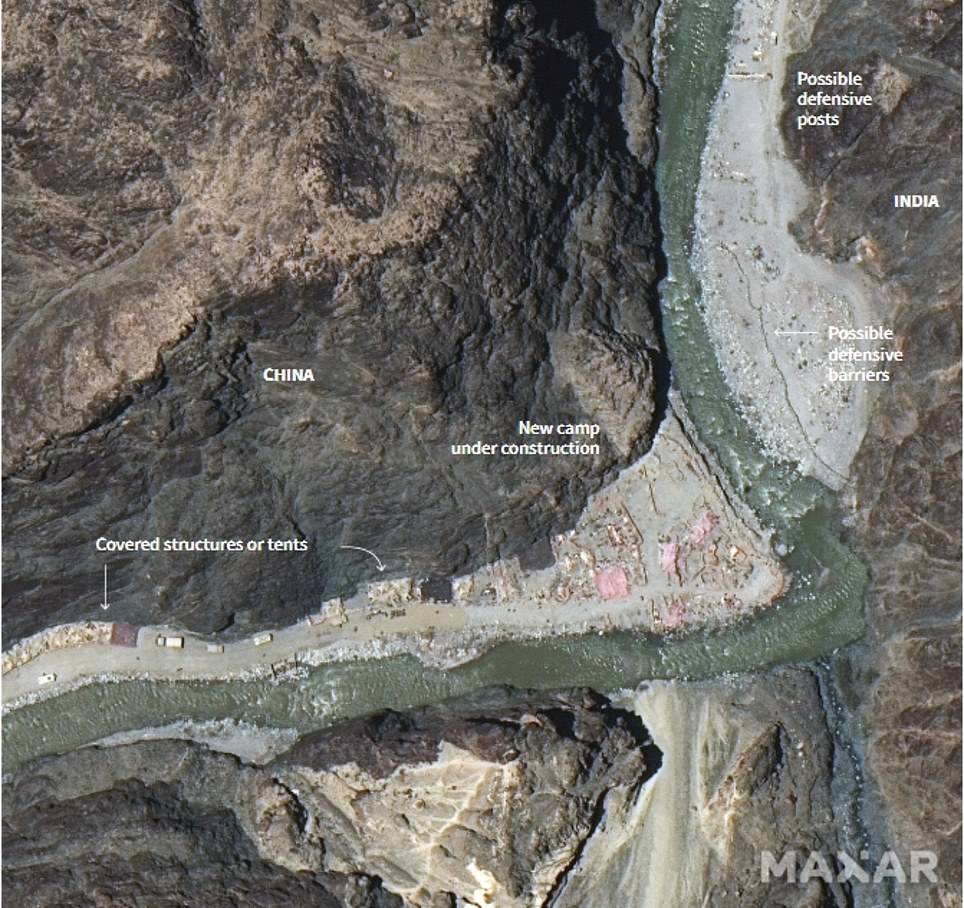 No backing down: This area is thought to have been the site of vicious hand-to-hand fighting between Indian and Chinese troops on June 15, that saw at least 20 killed. Indian analysts say the new Chinese camp, shown right, appears to be a mile over their side of the border – though China claims the whole region rightfully belongs to them 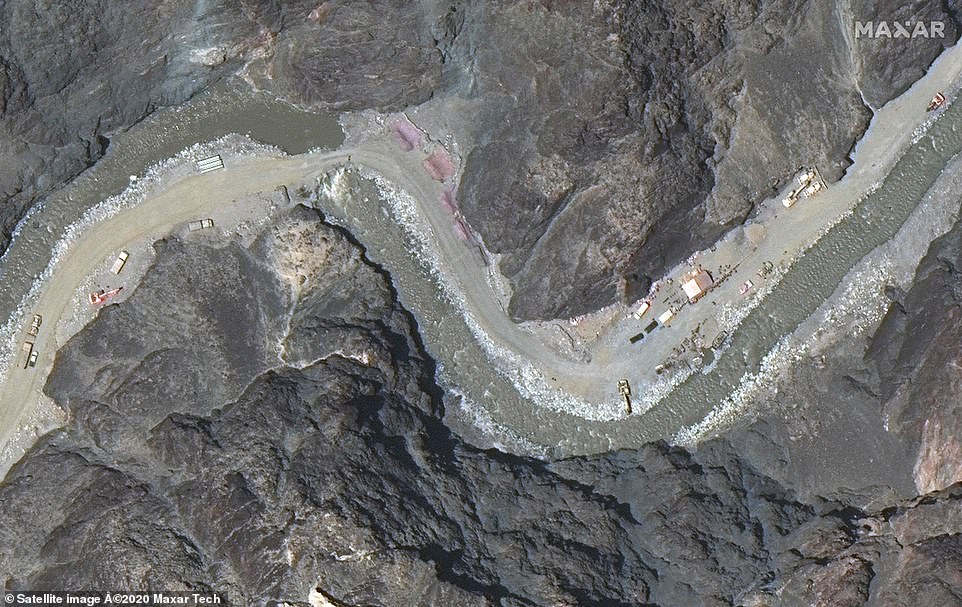 Road to ruin? A satellite image taken on June 22 shows a road under construction on the Chinese side of the border, including several trucks, tents, diggers and cranes, along with a newly-constructed culvert over the river

While the images were taken a month apart, Reuters news agency – which has access to more photos from space technology firm Maxar – reports most of the construction has happened in the last week.

Both sides have repeatedly pledged to pull back from the disputed region, with the latest statement issued just yesterday – when India was pictured sending more troops and jets to the frontlines.

India says the area where the structures have sprung up are on its side of the poorly defined, undemarcated Line of Actual Control or the de facto border between the two Asian giants.

China says the whole of Galwan valley, located at about 14,000ft above sea level, is its territory and blames Indian troops for triggering the clashes.

Nathan Ruser, a satellite data expert at the Australian Strategic Policy Institute, said the buildup suggested there was little sign of de-escalation.

‘Satellite imagery from the Galwan Valley on June 22nd shows that ‘disengagement’ really isn’t the word that the (Indian) government should be using,’ he said in a post on Twitter. 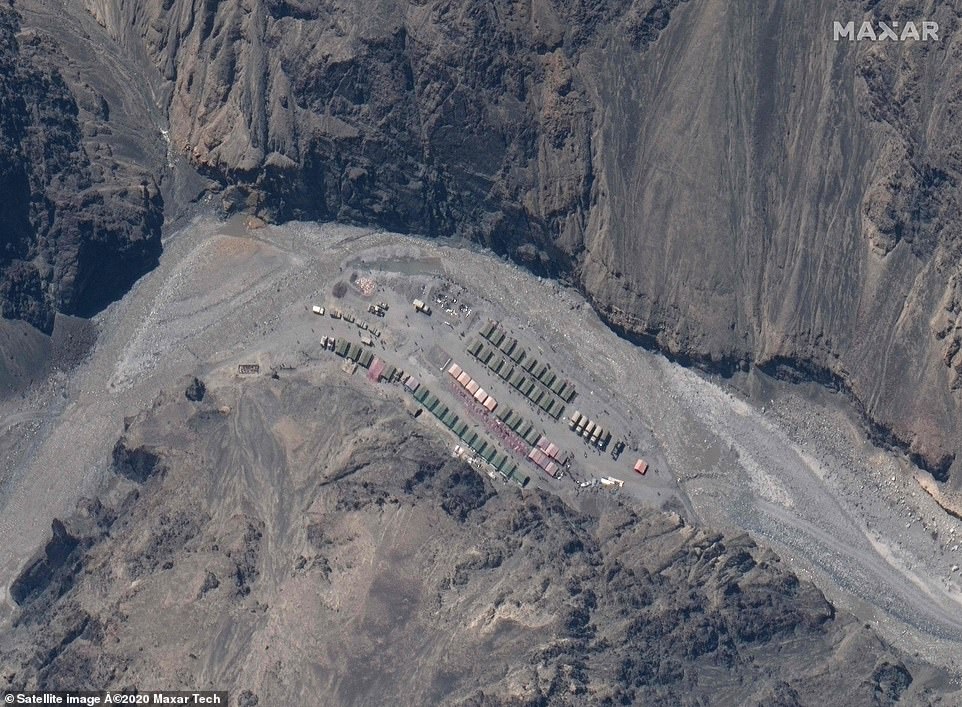 Show of force: This newly-released image shows a Chinese base further along the valley. Both sides have officially agreed to ‘disengage’ in the region, though observers say forces are building on both sides 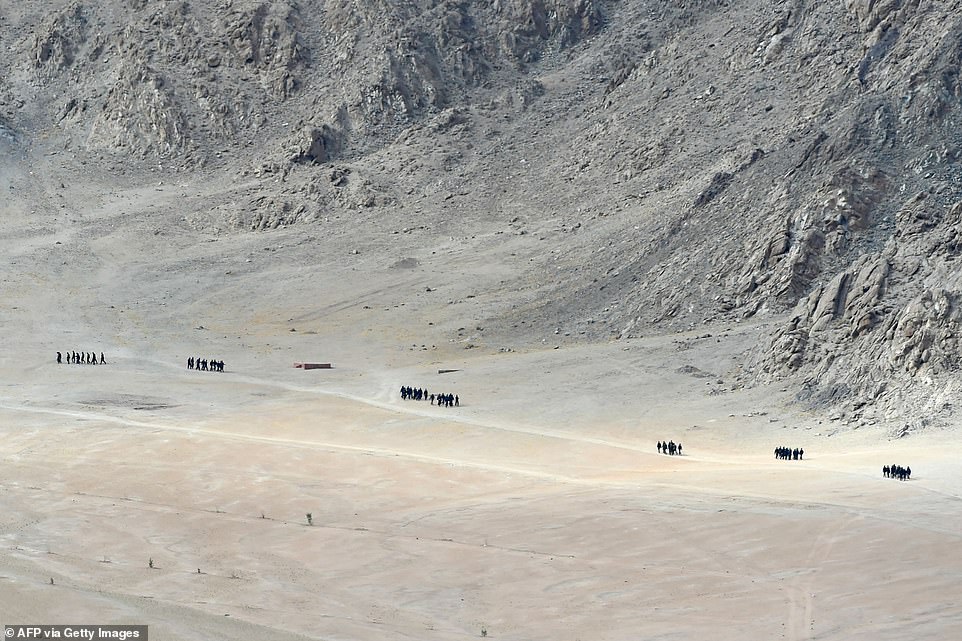 Indian soldiers walk at the foothills of a mountain range near Leh, the largest town close to the disputed border, on Thursday. Locals say forces have been massing despite governments promising to back off 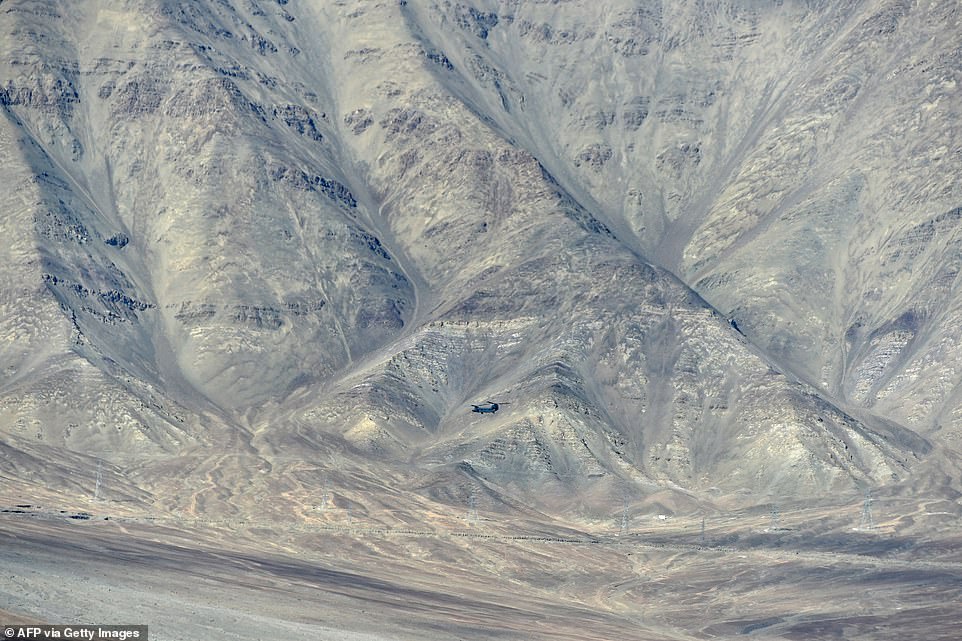 An Indian Air Force’s Chinook helicopter is seen flying over the arid terrain of Ladakh, the region where the disputed border – officially known as the Actual Line of Control – is located 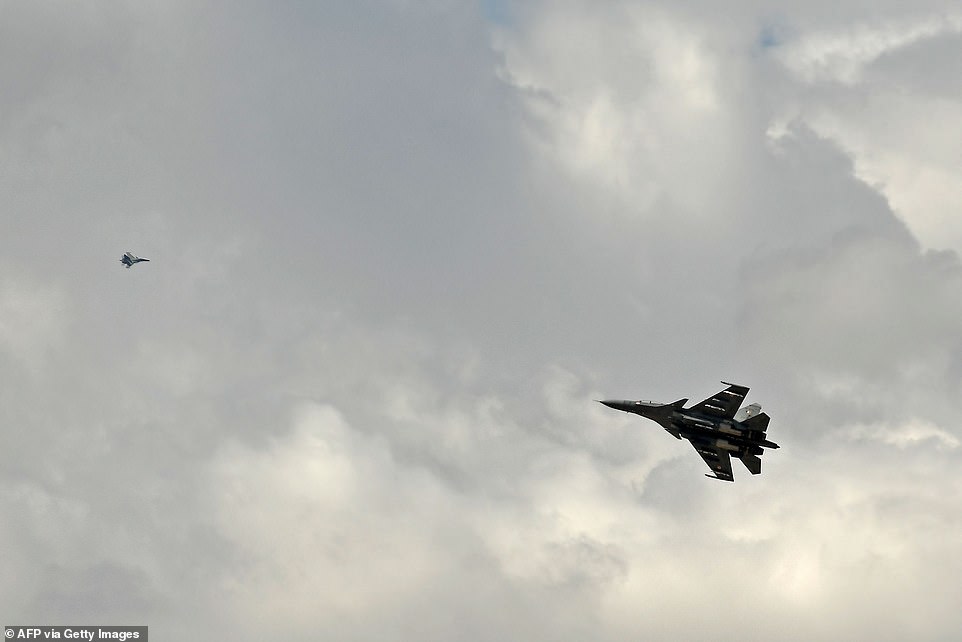 China’s foreign ministry did not immediately respond to requests for comment on the apparent activity.

India’s defence ministry also did not respond to a request for a comment.

Indian military officials have previously said they will be closely monitoring the planned disengagement process and verify it on the ground.

‘There is a trust deficit so far as the Chinese are concerned,’ said former Indian army chief Deepak Kapoor.

‘So if they are telling us verbally they are ready to pull back, we will wait to see it on the ground. Until then the armed forces will be on alert.’

The Himalayan border between India and China has been disputed for centuries, but the two countries have been fighting over it most recently since the 1960s.

In the 18th century it was fought over by the Russian, Chinese and British empires, and after India gained independence ownership of the region became more confused.

China values the region because it provides a trading route to Pakistan, and recent hostilities have been sparked by fears in Beijing that India will cut it off from the crucial overland corridor.

The current official border between the two was set by Britain and is known as the McMahon line. It is recognised by India but not by China.

In reality, the border between the two countries is on Line of Actual Control (LAC) where Indian and Chinese forces finished after the Sino-Indian War of 1962. 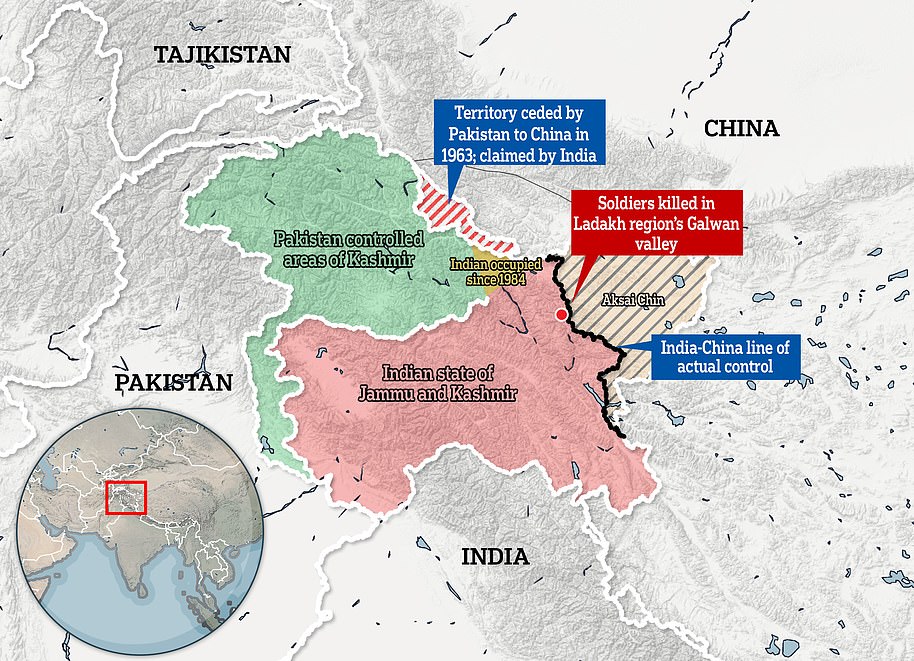 At least 20 Indian soldiers, including a colonel, were killed and at least 43 Chinese men were wounded or killed last Monday night along the Line of Actual Control (LAC), a disputed border in the Himlayas (the red territory is controlled by India, and the beige and grey stripes, Aksai Chin, is Chinese but claimed by India, the white line which surrounds is what Indian believes its border should be, whereas the black line was agreed after then 1962 Sino-Indian War – a heavy defeat for India)

Aksai Chin, the site of the latest tensions, is located in India according to the official border but is claimed as part of the Chinese region of Xinjiang by Beijing.

It is an almost uninhabited high-altitude scrubland traversed by the Xinjiang-Tibet Highway.

The other disputed territory is hundreds of miles away to the east of Tibet.

The 1962 Sino-Indian War was fought on these two frontiers as Indian Prime Minister Jawaharlal Nehru put it, a struggle over land where ‘not even a blade of grass grows.’

In addition to the disputed border, China had seized Tibet ten years before and accused India of trying to to subvert Beijing’s interests by granting asylum to the Dalai Lama.

There was also a Cold War element and India wanted to see if the US would back it in a confrontation against communist China.

Delhi had ignored the desolate corner of the subcontinent which allowed the Chinese to build a military road through it during the 1950s to connect the province of Xinjiang to Tibet.

The Indian discovery of this highway was a major factor which led to ferocious clashes leading up to the war.

Yet the Indians had just two divisions posted at the border when the Chinese invaded, never suspecting that Beijing would be so bold as to cross the McMahon Line.

The war lasted for one month and left more than 2,000 dead on both sides. It was a heavy defeat for India and led to the new border, the LAC, being established and pushing India back from McMahon line. 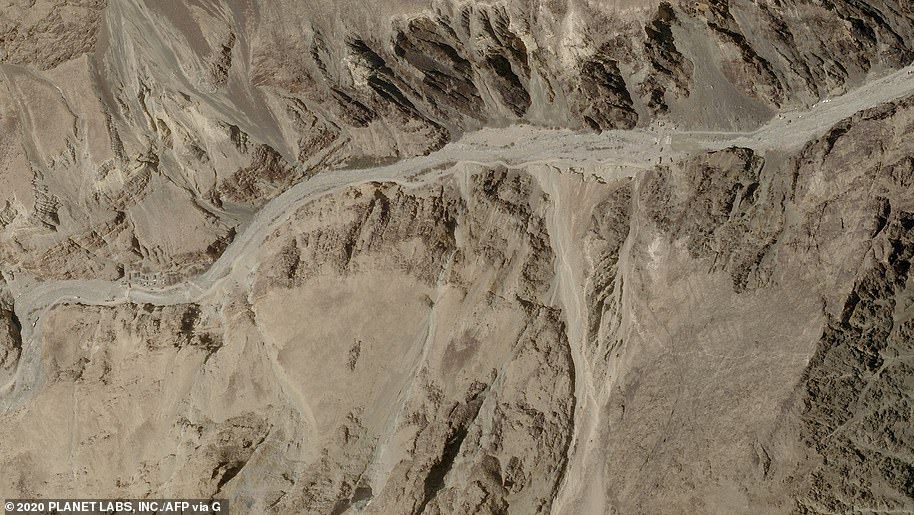 Uninhabitable desert: The Galwan Valley where the mass brawl between the Indian and Chinese forces took place. The Chinese interest in the region surrounds President Xi Jinping’s centrepiece ‘Belt and Road’ policy to have vast infrastructure throughout the old Silk Road. Beijing fears that increased Indian presence in the region will cut off its trade route to Pakistan

Much of the reason for the ongoing conflict is the ill-defined border, the result of a confused status the region had during the colonial era, which was made more murky by India’s war with Pakistan in 1947.

Beijing fears that increased Indian presence in the region will cut off its trade route to Pakistan.

The two sides have blamed each other for recent hostilities but analysts say India’s building of new roads in the region may have been the fuse for May’s standoff.

Both sides have dispatched reinforcements and heavy equipment to the zone.