Bikie Toby Mitchell has successfully challenged a prison term at appeal and will stay out of jail for striking a man at a pub in country Victoria.

Mitchell was celebrating his 47th birthday with a woman at the American Hotel in Echuca on November 28 last year when he exchanged words with a fellow patron and struck the man twice to the face. Mitchell was in the town to take part in a charity ride with the Mongols. 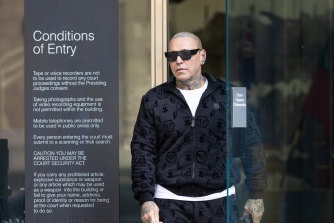 Magistrate David Starvaggi last year jailed Mitchell for two months after he pleaded guilty to assault and failing to give police access to his mobile phone, but the bikie was granted bail when he lodged an immediate appeal against the penalty.

On Tuesday, County Court Judge George Georgiou re-sentenced Mitchell to a one-year community correction order, with a conviction but no time in custody, and orders for him to get treatment for mental health problems, alcohol abuse and anger management.

Prosecutors alleged Mitchell struck the man with a left fist and then a right slap, and that the victim fell to the floor after each strike.

But after viewing CCTV footage, Georgiou ruled he wasn’t satisfied the first strike was a punch, although it did cause the victim to fall. The judge ruled the second strike – a slap – caused the man to stumble but not fall.

Defence lawyers argued the victim was drunk and repeatedly pestered the bikie, and a witness in the hotel told police the victim “just wouldn’t shut up” before the incident escalated.

Georgiou found although Mitchell lost his temper in a public place, the assault fell towards “the lower end of the spectrum” and the victim was not injured. 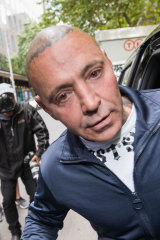 “While the victim’s behaviour does not justify or excuse the appellant’s conduct and that a wiser head would have walked away, I find the incident occurred in the heat of the moment without any premeditation,” he said.

The judge wasn’t satisfied a jail term was the only suitable penalty, and said such a sentence was disproportionate. He acknowledged Mitchell’s early guilty plea and health problems, which include post-traumatic stress disorder, diagnosed after he was shot in 2011. Mitchell was also shot in 2012.

Mitchell has past convictions for assault and affray dating back more than 20 years and was on a good behaviour bond, for a previous assault, when he struck the man in the hotel. Prosecutors had argued the magistrate’s decision to impose jail was an appropriate sentence.

Georgiou found the offending had no connection to the Mongols and said Mitchell was no longer associating with the motorcycle gang, although it was clear he needed more help to deal with his PTSD and anger issues.