In a bizarre incident caught on tape, a man donning black shorts, a gray tee and a messenger bag on his stomach, is seen walking down University Ave. in California's Palo Alto brandishing a gold spray can. 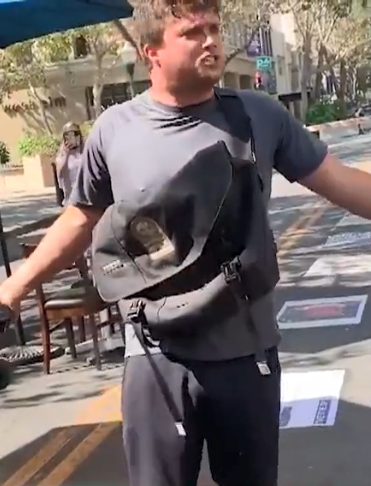 After making wild accusations about social justice posters gracing the avenue – including one referencing how they were related to Chinese concentration camps – the man spray-painted "MAGA" and other responses over the Black Lives Matters-related art.

On one poster that reads "Black Palo Altans were 13x more likely to be arrested than their white counterparts," the man spray-painted in response, "They do more crime."

"Wake up people," he screamed as he spray-painted nearly every poster on the street.

Of the epithets he shouted included "MAGA" and "Patriot Lives Matter." The man then justified his actions by saying the posters were anti-Trump and anti-police. "We should all reunite as patriots," he is heard whining.

The posters were created by local young people of color who created the Palo Alto Youth Art Protest. Local high school and college students worked on and researched the posters, which shared statistics on the likelihood of one's involvement with the justice system if one were a minority, as well as other grounding facts and figures. 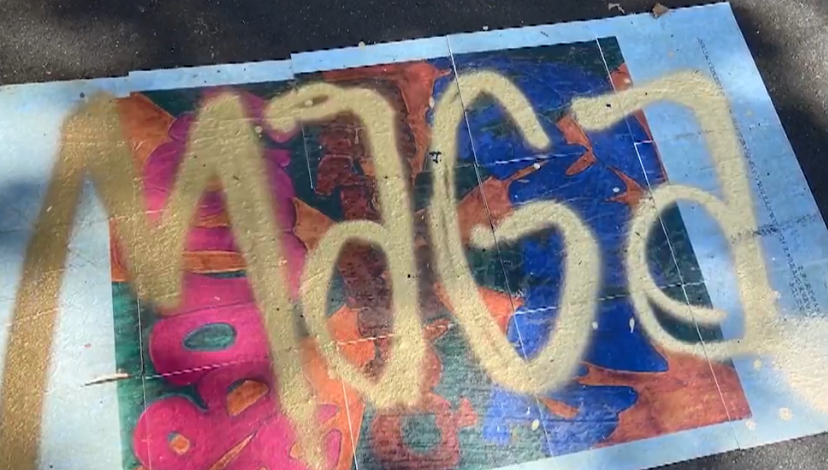 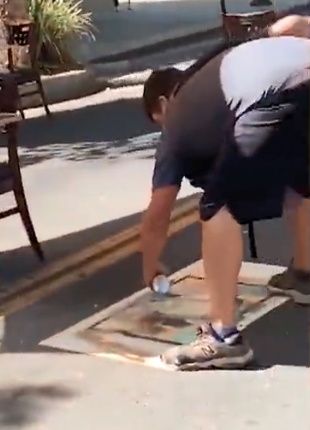 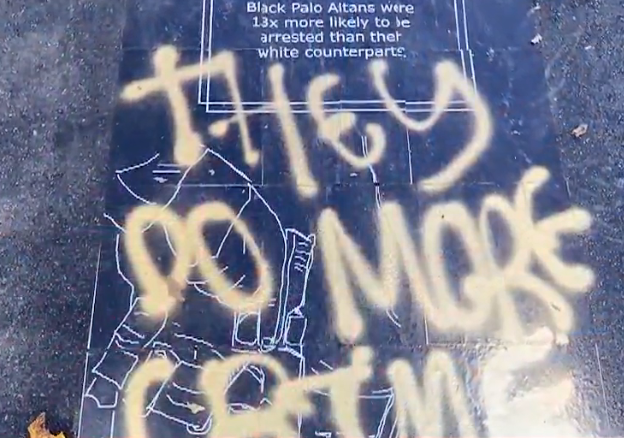 In one poster that reads "Black Palo Altans were 13x more likely to be arrested than their white counterparts," the man spray-painted in response, "They do more crime."

Jeremy Gabato, a local youngster who caught the incident on tape, was upset such a thing could happen in Palo Alto. "It’s unfortunate to see that happening here so close to home and in such a place. It’s like where you expect them to be more progressive."

"It didn't really match up where he's trying to promote anti-racist beliefs by being racist," Gabato said of the man's actions.

A GoFundMe created by the Palo Alto Youth Art Protest to replace the posters has already surpassed the $1500 fundraising goal since its creation Saturday. A description for the page reads "The art was made by young People of Color who sent in their artistic creations speaking on the Black Lives Matter movement that has rallied the nation."

"However, at 11 am today in plain daylight a white male with a can of gold spray paint defaced almost every poster with “MAGA” and other racist commentary," the GoFundMe continued. "Some people called it “vandalism on vandalism” but we call it disfiguring of art and erasure of history."

"At the same time what occurred today shown a light on how unprogressive Palo Alto is despite the image it likes to uphold," the GoFundMe read, referencing the highly documented conservative population in a typical liberal California city.

"He blocked every source and covered important and informative content as well as art. We do not believe that our protest was heard, or seen the way it deserved to be," the fundraiser page said, while also adding any additional funds not put towards printing costs will be donated to local nonprofits like The Lawyers’ Committee for Civil Rights of the San Francisco Bay Area or People’s Kitchen Collective.

"We hoped that as people walked down University Avenue and saw this installation, they would be left with new thoughts, new information, and new ideas on how to enact change in their own daily lives to combat the systemic inequities that exist here in Palo Alto," the GoFundMe concluded. "Instead, a protest exhibiting the racism in Palo Alto is defaced by a racist in Palo Alto and people’s reaction is “how can this happen here”. The irony is unbelievable."