For the second weekend in a row, crowds gathered in Sydney and Melbourne, where tens of thousands rallied against COVID-19 vaccines, Victorian Premier Daniel Andrews and his government’s controversial pandemic bill. 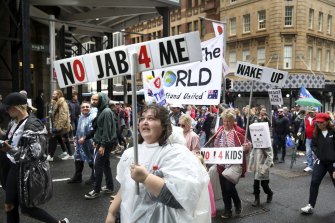 Nearly 87 per cent of Australians are fully vaccinated against COVID-19. The overwhelming evidence is that the coronavirus vaccines are safe and effective in preventing severe disease.

The Millions March Against Mandatory Vaccination rallies were organised for cities across the country. In Sydney, a large contingent of police circled Hyde Park and patrolled the CBD as the largely peaceful crowd gathered at the park and spilled onto surrounding streets about midday.

Protesters carried placards that read “Freedom needs no passport”, “No to mandates” and “Fake news, where are you?” . The crowd surrounded a stage set up at the north end of the park, near College Street, as they chanted repeatedly “Unity”, and sang along to songs including I Am Australian and John Farnham’s That’s Freedom.

One young boy, introduced as Gabriel, criticised vaccine mandates during his speech, and told protesters he wanted to speak about “how sad and frustrated I am about our worldwide situation”. 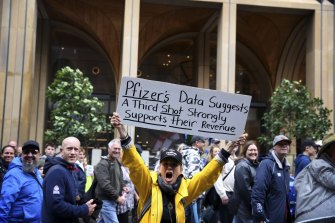 The crowd converged on Hyde Park and surrounding streets in the CBD.Credit:James Alcock

The boy said he and his siblings were the only children at their school who didn’t wear masks, which prompted a cheer from the unmasked crowd.

Another speaker from the stage near College Street had to compete with the loud ringing of the church bells at St Mary’s Cathedral as he criticised political leaders and led the crowd in repeated cheers of “sack them all”.

A long line-up of speakers throughout the afternoon railed against mask-wearing, criticised state leaders and the federal government’s handling of the pandemic, and aired unsubstantiated claims against COVID-19 vaccines.

Among them was former Liberal MP Craig Kelly, who plans to stand as a candidate for Clive Palmer’s United Australia Party. He thanked the “great crowd for being part of Australian history” during an address about 3pm.

He criticised the NSW, Victorian and Queensland governments’ response to the coronavirus, and said Prime Minister Scott Morrison could “end vaccine passports in Parliament next week if he wanted to. But he doesn’t”.

“At the United Australia Party, we’ve got the firepower of 85,000 people strong, that we’re going to blast them all out, and vote them all out.

“When we’re successful at the next election, the very first order of business will be to abolish vaccine passports in this country forever”.