GENEVA (Reuters) – U.S. Secretary of State Anthony Blinken told the U.N. Human Rights Council on Tuesday that Russian "crimes" in Ukraine are mounting by the hour, with strikes hitting hospitals, schools and residential buildings with civilians.

Moscow faced increasing isolation on Tuesday as President Vladimir Putin showed no sign of stopping an invasion of Ukraine, where fierce fighting and Russian bombardment have killed dozens and sparked a refugee crisis.

"Russian strikes are hitting schools, hospitals, and residential building," Blinken said in a video message to the Geneva forum. "Reports of Russia's human rights abuses and violations of international humanitarian law mount by the hour."

Blinken said that the council's urgent debate on Ukraine scheduled for Thursday, where a resolution brought by Kyiv and allies would set up an international probe into violations, is an "important step toward ensuring documentation and accountability".

"We must send a resolute and unified message that President (Vladimir) Putin should unconditionally stop this," he said.

"We must reject Russia's attempts to falsely justify this attack as a defense of human rights – misappropriating terms that we reserve for the worst atrocities and disrespecting every victim of those crimes," he said. 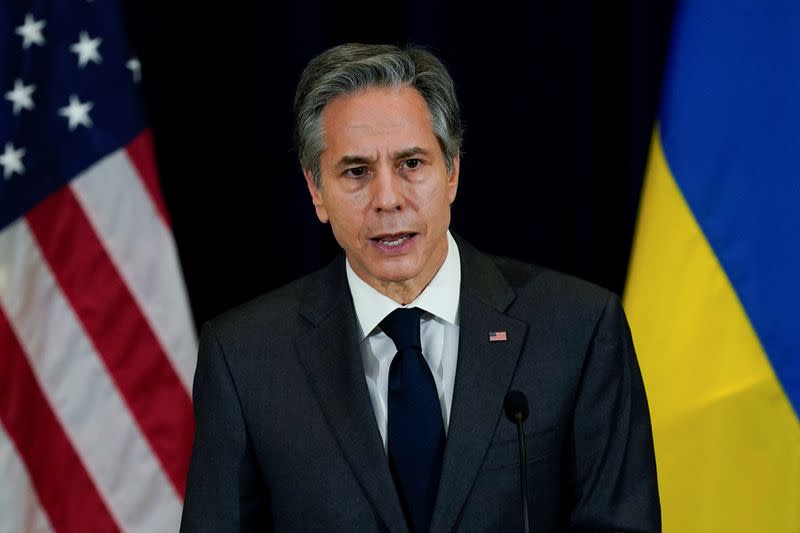 Uzra Zeya, U.S. Under Secretary of State for Civilian Security, Democracy, and Human Rights, told reporters in Geneva after the speech that Russia's invasion was "resulting in a human rights and humanitarian catastrophe".

Blinken's speech marked Washington's return as a voting member to the top U.N. human rights body which the Trump administration quit in 2018 over what it called chronic bias against Israel and a lack of reform.

But he said that the Biden administration would continue to counter what he called the council's "anti-Israel bias and the unfair and disproportionate focus on Israel on the Council".

He said that China "continues to commit genocide and crimes against humanity in Xinjiang" against Muslim Uyghurs. He was referring to reports that some 1 million Uyghurs are detained in mass camps in the remote northwestern region, some subjected to forced labour, which Beijing denies.

He called for U.N. human rights boss Michelle Bachelet to release her office's report with findings on the situation.