An Army bomb squad closed off the centre of Grimsby after a ‘suspicious package’ was found at a hotel.

Haishuet Yeung, owner of The Landings, said he alerted police after uncovering a large barrel and an ‘unknown black liquid’ in one of the hotel rooms after a guest had left.

Mr Yeung said a man had been staying in one of the rooms for 14 days. He said the ‘problem’ guest refused to abide by the hotel’s 10pm curfew, coming and going in the early hours of the morning.

There were reports of ‘massive disruption’ in the area with traffic coming to a standstill in and out of the town after the alert. 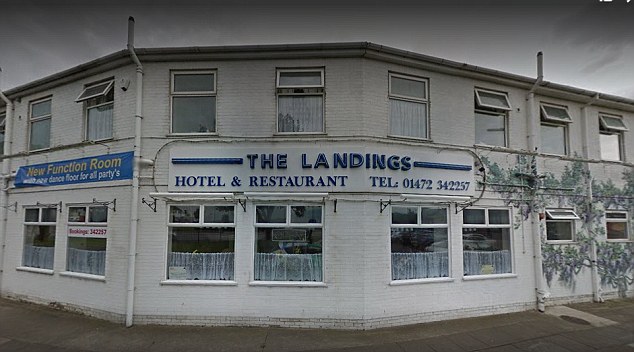 Haishuet Yeung, owner of The Landings (pictured), said he alerted police after uncovering a large barrel and an ‘unknown black liquid’ in one of the hotel rooms after a guest had left

An Army bomb disposal unit has now arrived at the scene while Humberside Police are advising people to ‘avoid the area’ until the incident has been resolved, after closing a section of the A180 at around 5pm.

The man disappeared two days ago, and Mr Yeung inspected he room today. He said he was appalled by what he uncovered. ‘I opened the door to get it. It looked horrible. No one would be like that.’

He added: ‘I worry about maybe a chemical. It could blow up. The police came to look and told us “out!”. They don’t know what it is.’

He said the room had cigarettes, rubbish and the unknown substance was beside the bed and on water in a jar. He took a photo of the substance, which he said looked like ‘abstract art’.

Mr Yeung says that he found a large barrel and an ‘unknown black liquid’ in the room after the guest had left, and police have seized the substance and taken it away for testing.

He said the police seized the substance and took it away. The hotel owner said the barrel was round and plastic.

He said: ‘It was 30cm or 35cm wide and tall. It had a little hole in the top. You could see through it, water. It didn’t know why he bring this thing in.

‘On the top it had some sort of electric control. The liquid was not clear.’

Nearby Burger King has also been evacuated.

Humberside Police were called to the property on the A180 close to the junction of Victoria Street North just before 5pm.

He said there was a ‘suspicious chemical’ near the bed and in the top of a jar of water.

Burger King assistant manager Marc Hall said police entered his store at around 4.50pm and told his staff to evacuate the building immediately.

He said: ‘At at around 4.30pm police started putting tape up outside the Landings Hotel, the residents and the owner were standing outside it.

‘Then at 4.50pm police came inside our store and asked us to turn everything off and to leave.

‘When I asked them what was going on they said that they were not able to tell us.

‘We then left the building and went to our evacuation point.’

A Humberside Police spokesperson said: ‘Officers are currently in attendance at a business on Cleethorpe Road, Grimsby following reports of a suspicious object being found shortly before 4pm today.

‘A cordon has been put in place to ensure the safety of everyone in the area whilst enquiries are undertaken.’ Boris Kodjoe Shades T.I. and Tiny for Asking How He and Wife Nicole Parker ‘Keep Dirt on the Low’
We and our partners use cookies on this site to improve our service, perform analytics, personalize advertising, measure advertising performance, and remember website preferences.Ok