Ministers are being urged to help underwrite large music festivals after Boomtown became the latest casualty to cancel because of pandemic uncertainty.

Organisers of the Winchester event said they were ‘devastated’ to abort for a second straight year but unwilling to stake millions on lockdown having ended by August.

They said: ‘For an independent event as large and complex as Boomtown, this means a huge gamble into an eight-figure sum to lose if we were to venture much further forward, and then not be able to go ahead due to Covid.’

They lamented a lack of a Government-backed insurance scheme to provide a ‘safety net’ for festivals grappling with unprecedented circumstances.

It piles more pressure on the Treasury to insure festivals through an indemnity arrangement, which has been backed by the likes of Jools Holland and Robert Plant. 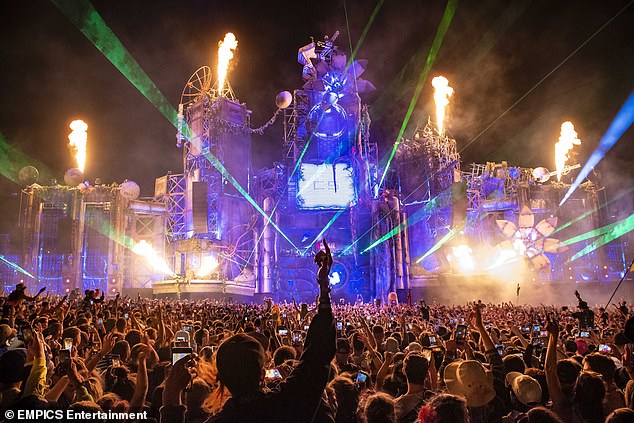 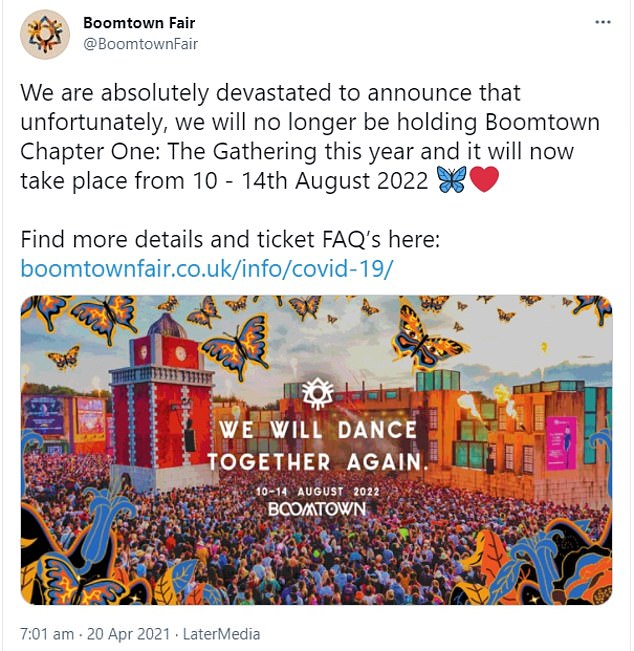 Boomtown had been scheduled for August 11 to 15 and in February sold out its 66,000 capacity.

But this morning organisers announced the ‘heartbreaking news’ they had run out of time to find a solution to the ‘mind-boggling conundrum’ of how to pull off the event.

A statement said: ‘With less than four months to go until the event, and after almost half a year of collective campaigning to the government, sadly Covid specific cancellation insurance for events simply does not exist at this point in time.

‘This means anyone putting on an event this year, will be doing so without the safety net of insurance to cover them should Covid prevent them from going ahead in any capacity.’

A ‘very generous’ grant from Arts Council England only covered a ‘fraction’ of the costs, it added.

Fans were left dismayed by the news, with one saying he had ‘nothing to look forward to now until December’.

Tory MP Julian Knight, chair of the Commons Culture Select Committee, told MailOnline: ‘I’ve read their statement and it clearly states that the lack of insurance is the major contributing factor.

‘This is what I feared all along – that there would be a swathe of cancellations.

‘I understand the caution of the Government and the Treasury but it would be helpful if they would come together with the industry to get some sort of festival season this year.’

He added that for many local businesses festivals are their ‘bread and butter’ providing the backbone of their income.

Under Boris Johnson’s roadmap to exit lockdown, the reopening of large gatherings such as music festivals are pencilled in for June 21.

But many festivals have been unwilling to wager on this and have already pulled the plug.

Glastonbury, Download and the British Summer Time in Hyde Park have both scrapped this summer’s festivals.

Yet many others including Camp Bestival, Isle Of Wight Festival and Latitude are going ahead.

When: August 11-15   Where: Matterley Estate, Hampshire

When: June   Where: Donnington Park, Leicestershire