Liz Truss talked up hopes of a US-UK trade deal today as she said there are ‘huge opportunities out there’ for post-Brexit Britain.

The Trade Secretary said that a deal with Washington is ‘in the pipeline’ as she was grilled over plans for Britain to become the 12th member of the Comprehensive and Progressive Agreement for Trans-Pacific Partnership (CPTPP).

The bloc of nations includes Japan, Canada, Australia and New Zealand – in which 95 per cent of goods are traded between members tariff-free – and accounts for 13 per cent of global commerce.

Boris Johnson’s administration had been hopeful of striking a trade deal with the US while Donald Trump was in the White House.

But the talks were hindered by the pandemic and then Mr Trump was defeated in November’s election, so it will now have to deal with a Biden administration that needs time to swing into action.

Ms Truss told Sky’s Ridge on Sunday today: ‘If you add up the CPTPP and the United States, that’s 40 per cent of global GDP, that is a huge market for us to go after.’

When Sophy Ridge pointed out that the UK does not yet have a trade dea with the US, the minister added: ‘Well, we’re working on that as well, those are in the pipeline.

‘But my point is that there are these huge opportunities out there and those markets are growing faster than the EU markets and we need to think about where do we want Britain to be in 2030? 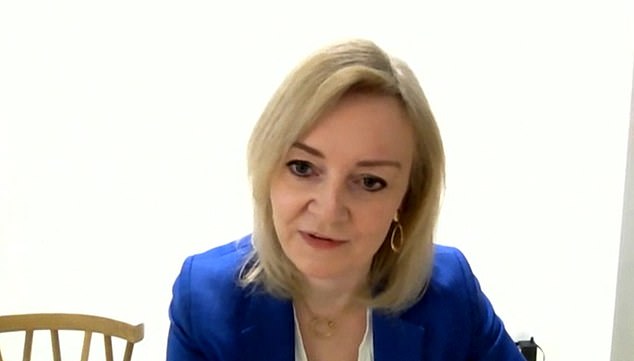 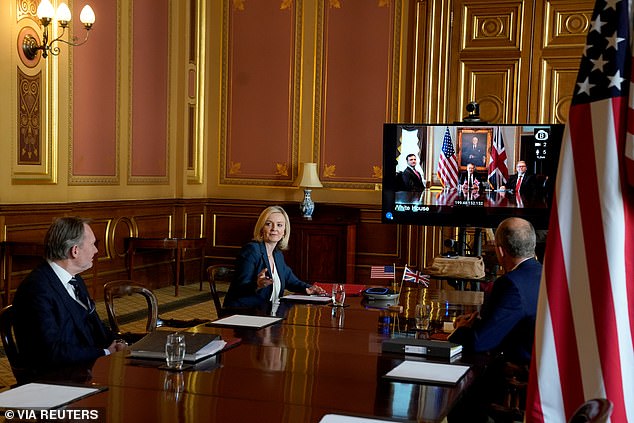 Boris Johnson’s administration had been hopeful of striking a trade deal with the US while Donald Trump was in the White House. Pictures is Ms Truss holding remote talks with US Trade Representative Robert Lighthizer last May

‘Where do we want us to be in 2050 when digital trade is much more important, where British products like financial services and robotics will be in huge demand across the world so what I am doing is laying that groundwork for our future economic opportunities.’

Ms Truss told Times Radio she would send a ‘letter of intent’ on Monday and that she expected formal negotiations will start in the spring.

Since leaving the European Union, Britain has made clear its desire to join the CPTPP,  which removes most tariffs between Australia, Brunei, Canada, Chile, Japan, Malaysia, Mexico, New Zealand, Peru, Singapore and Vietnam.

It would cut tariffs on food and drink and cars and boost the service industries.

As an example, joining the bloc would cut the tariff on Scotch whisky in Malaysia from 165 per cent to nothing.

Reuters reported on Thursday that Britain will not publish an assessment of the economic benefits of CPTPP membership before requesting to join it – contrary to earlier promises.

Businesses reacted warmly to the plans, with the Federation of Small Businesses (FSB) saying it would help firms ‘thrive and succeed more than ever’.

But shadow international trade secretary Emily Thornberry said Labour will closely scrutinise any pact and called on the Government to consult the public.

‘Like any other trade agreement, the advantages of joining the CPTPP will have to be assessed once we see the terms on offer.

‘At present, Liz Truss cannot even guarantee whether we would have the right to veto China’s proposed accession if we join the bloc first,’ she said.

‘More generally, people will rightly ask why we have been through five years of debate in Britain over leaving a trade bloc with our closest neighbours only to rush into joining another one on the other side of the world without any meaningful public consultation at all.’