Try to look a bit sad, Boris! Ex-Foreign Secretary is branded a ‘poundshop Churchill impressionist’ after posing for resignation photos as he quits Theresa May’s government

Boris Johnson was today branded a ‘poundshop Churchill impressionist’ after he posed for photos signing his resignation letter as he sensationally quit Theresa May’s Cabinet.

The outgoing Foreign Secretary – a biographer of the wartime leader Sir Winston Churchill – was photographed looking grim-faced and sat at his desk writing his resignation letter.

The photographs were put out this afternoon as he announced he was quitting the Government because he believes the PM’s are ‘suffocating’ Brexit and risk turning Britain into a ‘colony’.

But Lib Dem MP Layla Moran mocked the leading Brexiteer for staging the snaps – saying the move was ‘pathetic’.

And she accused Mr Johnson of ‘running away’ from the Government when the going gets tough – pointing out he went away he missed the controversial Commons  vote on the expansion of Heathrow  airport last month. 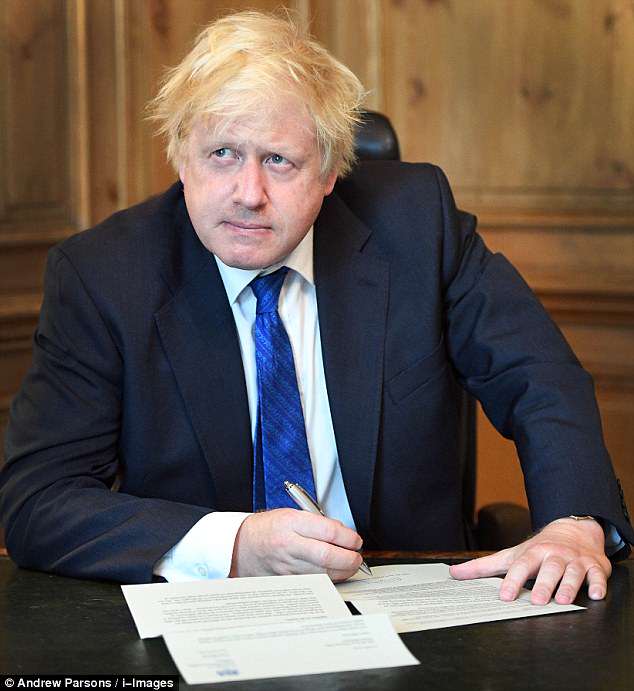 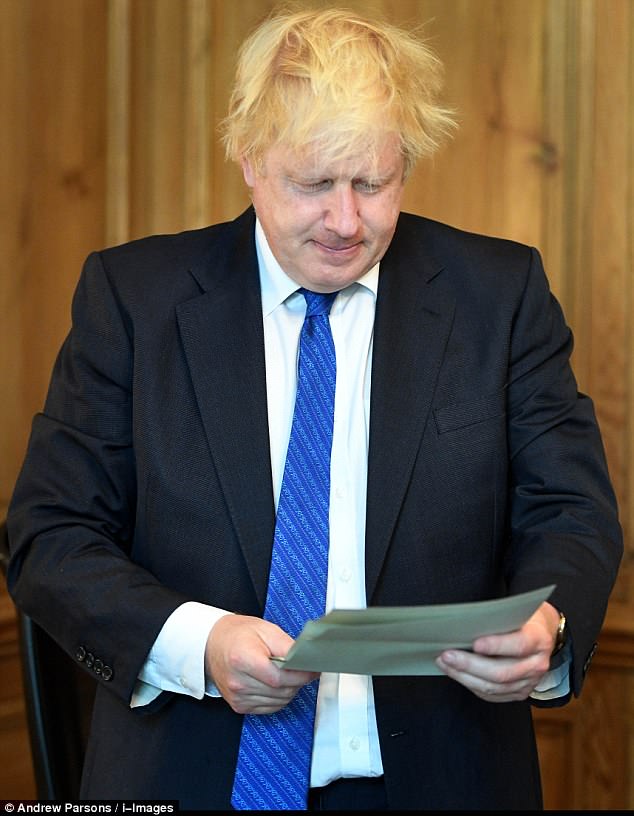 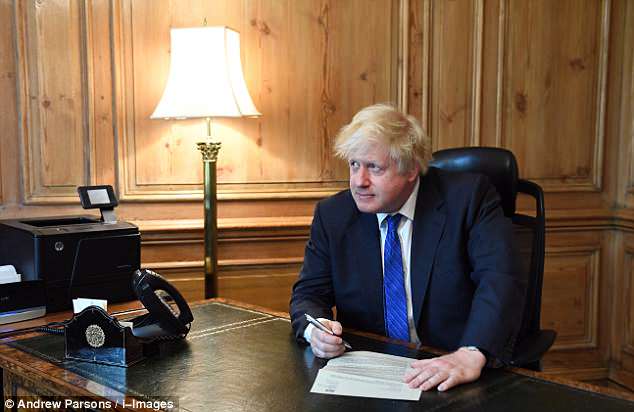 Boris Johnson wrote his resignation letter at the official Foreign Secretary London residence today. His departure has raised fresh questions about whether Theresa May will survive as PM

Ms Moran, a leading member of the anti Brexit group Best for Britain, said: ‘This staged resignation photograph is pathetic. This man is a poundshop Churchill impressionist. Its just very sad.

‘But Boris is doing what he does best: when the going gets tough he runs away like a coward.

‘He did it over Heathrow and he’s done it today. Rather than fight for the country he yet again cares only for his own self interest.

‘But at least he will have a little momento of the day his dreams came crashing down around him.’

Labour’s David Lammy said: ‘The fact that Boris Johnson arranged for a photoshoot of himself signing his resignation letter for the front pages tells us everything we need to know about him.

‘Self-obsessed, vain egomaniac devoid of substance caring only about himself and advancing his career. Good riddance.’

Sam Macrory, an ally of Nick Clegg, said: ‘We all know that Boris Johnson’s decision to quit is absolutely not about one man and his personal ambitions, but I’m struggling to think of another time where a Secretary of State called in the photographers to record the moment a resignation letter was signed.’

Gavin Sinclair said: ‘This sums up Boris – has a senior minister ever called in a photographer before resigning…and just before the PM’s statement to the Commons?!’

And Jon David Ellis criticised Mr Johnson’s behaviour in the aftermath of the Novichok poisonings, saying: ‘Boris literally posed with his resignation letter. Hours after a British citizen died from a foreign agent he chooses self image over basic dignity.’ 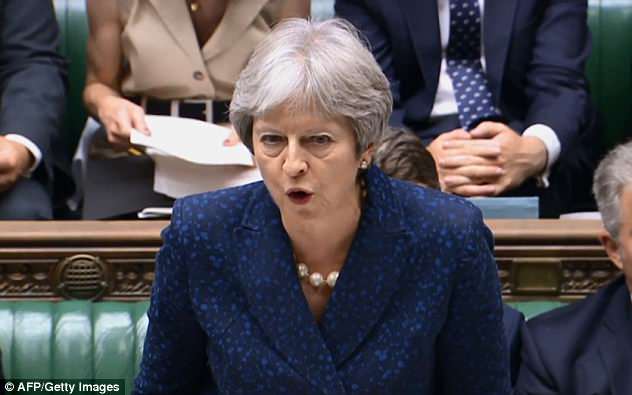 Mr Johnson plunged the Government into crisis by announcing his shock resignation this afternoon – less than 24 hours after David Davis announced he was quitting.

The double departure left Mrs May’s premiership hanging by a thread and plunged Westminster into fevered speculation that she could  face a leadership challenge.

And Mr Johnson twisted the knife as he left Government – penning an astonishing resignation letter accusing the PM of killing of the Brexit dream.

He warned that Britain was destined for a ‘semi Brexit’ if the blueprint agreed by the Cabinet at Chequers on Friday is delivered.

He said selling the policy would ‘stick in the throat’ and he could not stand by waving ‘white flags’ of surrender, meaning he had to quit.

But Mrs May hit back in her icy letter accepting his resignation – effectively accusing him of signing up to the Chequers plan before walking away.

She said:  ‘I am sorry – and a little surprised – to receive it [resignation letter] after the productive discussions we had at Chequers on Friday, and the comprehensive and detailed proposal which we agreed as a Cabinet.’

The PM said that after months of offering ministers ‘considerable latitude to express their individual views’ she is now imposing order on her Cabinet who must back the Government line.

She added: ‘If you are not able to provide the support we need to secure this deal in the interests of the United Kingdom, it is right that you should step down.’

In full: Boris Johnson’s damning resignation letter to Theresa May

It is more than two years since the British people voted to leave the European Union on an unambiguous and categorical promise that if they did so they would be taking back control of their democracy.

Brexit should be about opportunity and hope. It should be a chance to do things differently, to be more nimble and dynamic, and to maximise the particular advantages of the UK as an open, outward-looking global economy.

That dream is dying, suffocated by needless self-doubt.

We have postponed crucial decisions – including the preparations for no deal, as I argued in my letter to you of last November – with the result that we appear to be heading for a semi-Brexit, with large parts of the economy still locked in the EU system, but with no UK control over that system.

It now seems that the opening bid of our negotiations involves accepting that we are not actually going to be able to make our own laws. Indeed we seem to have gone backwards since the last Chequers meeting in February, when I described my frustrations, as Mayor of London, in trying to protect cyclists from juggernauts. We had wanted to lower the cabin windows to improve visibility; and even though such designs were already on the market, and even though there had been a horrific spate of deaths, mainly of female cyclists, we were told that we had to wait for the EU to legislate on the matter.

So at the previous Chequers session, we thrashed out an elaborate procedure for divergence from EU rules. But even that seems to have been taken of the table and there is in fact no easy UK right of initiative. Yet if Brexit is to mean anything, it must surely give ministers and Parliament the chance to do things differently to protect the public. If a country cannot pass a law to save the lives of female cyclists – when that proposal is supported at every level of UK Government – then I don’t see how that country can truly be called independent.

It is also also clear that by surrendering control over our rulebook for goods and agrifoods (and much else besides) we will make it much more difficult to do free trade deals. And then there is the further impediment of having to argue for an impractical and undeliverable customs arrangement unlike any other in existence

Conversely, the British Government has spent decades arguing against this or that EU directive, on the grounds that it was too burdensome or ill-thought out. We are now in the ludicrous position of asserting that we must accept huge amounts of precisely such EU law, without changing an iota, because it is essential for our economic health – and when we no longer have any ability to influence these laws as they are made.

In that respect we are truly headed for the status of colony – and many will struggle to see the economic or political advantages of that particular arrangement.

It is also clear that by surrendering control over our rulebook for goods and agrifoods (and much else besides) we will make it much more difficult to do free trade deals. And then there is the further impediment of having to argue for an impractical and undeliverable customs arrangement unlike any other in existence.

What is even more disturbing is that this is our opening bid. This is already how we see the end state for the UK – before the other side has made its counter-offer. It is as though we are sending our vanguard into battle with the white flags fluttering above them. Indeed, I was concerned, looking at Friday’s document, that there might be further concessions on immigration, or that we might end up effectively paying for access to the single market.

On Friday I acknowledged that my side of the argument were too few to prevail, and congratulated you on at least reaching a Cabinet decision on the way forward. As I said then, the Government now has a song to sing. The trouble is that I have practised the words over the weekend and find that they stick in the throat. We must have collective responsibility. Since I cannot in all conscience champion these proposals, I have sadly concluded that I must go.

I am proud to have served as Foreign Secretary in your Government. As I step down I would like first to thank the patient officers of the Metropolitan Police who have looked after me and my family, at times in demanding circumstances.

I am proud too of the extraordinary men and women of our diplomatic service. Over the last few months they have shown how many friends this country has around the world, as 28 governments expelled Russian spies in an unprecedented protest at the attempted assassination of the Skripals. They have organised a highly successful Commonwealth summit and secured record international support for this Government’s campaign for 12 years of quality education for every girl, and much more besides. As I leave office, the FCO now has the largest and by far the most effective diplomatic network of any country in Europe – a continent which we will never leave.

Thank you for your letter relinquishing the ofﬁce of Secretary of State for Foreign and Commonwealth Affairs.

I am sorry – and a little surprised – to receive it after the productive discussions we had at Chequers on Friday, and the comprehensive and detailed proposal which we agreed as a Cabinet. It is a proposal which will honour the result of the referendum and the commitments we made in our general election manifesto to leave the single market and the customs union. It will mean that we take back control of our borders, our laws, and our money – ending the freedom of movement, ending the jurisdiction of the European Court of Justice in the United Kingdom, and ending the days of sending vast sums of taxpayers’ money to the European Union. We will be able to spend that money on our priorities instead – such as the £20 billion increase we have announced for the NHS budget, which means that we will soon be spending an extra £394 million a week on our National Health Service.

As I outlined at Chequers, the agreement we reached requires the full, collective support of Her Majesty’s Government. During the EU referendum campaign, collective responsibility on EU policy was temporarily suspended. As we developed our policy on Brexit, I have allowed Cabinet colleagues considerable latitude to express their individual views. But the agreement we reached on Friday marks the point where that is no longer the case, and if you are not able to provide the support we need to secure this deal in the interests of the United Kingdom, it is right that you should step down.

As you do so, I would like to place on record my appreciation of the service you have given to our country, and to the Conservative Party, as Mayor of London and as Foreign Secretary – not least for the passion that you have demonstrated in promoting a Global Britain to the world as we leave the European Union.