Boris Johnson today insisted he knows ‘how hard it has been on the frontline’ during the pandemic for NHS staff after he was challenged over the resignation of one of the nurses who looked after him when he was in intensive care with Covid.

Jenny McGee, who kept vigil by the PM’s side for two days when he was in St Thomas’ Hospital in London last year, said she was disillusioned with a ‘lack of respect’ shown by the Government to NHS staff.

She criticised the Government’s proposed one per cent pay rise for frontline health workers saying she was ‘sick’ of staff ‘not getting the respect and now pay that we deserve’.

Mr Johnson was challenged at PMQs over her decision to quit but he would not be drawn specifically on Ms McGee’s criticism or resignation.

He said he acknowledged his own ‘huge personal debt’ to NHS nurses and stressed ‘I know what a tough year they have had’ as he defended the proposed pay rise. 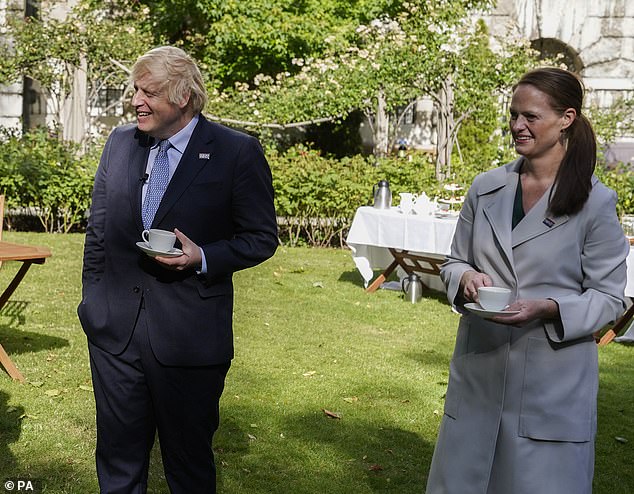 Jenny McGee, one of the nurses who helped look after Boris Johnson when he was in intensive care with coronavirus, has quit. She is pictured alongside the PM in the Downing Street garden in July last year

The resignation of Ms McGee was raised during PMQs by Labour MP Andy Slaughter who asked: ‘What does the Prime Minister think when he hears Jenny McGee, the nurse who saved his life, say of NHS staff: “We’re not getting the respect and now pay that we deserve. I’m just sick of it. So I’ve handed in my resignation”.

‘Surely even he must pause and think “what can be learned from mistakes of the past year?”, what Jenny calls the indecisiveness and mixed messages of his government?

‘And will he think again about giving nurses more than an insulting one per cent pay rise?’

Mr Johnson replied: ‘I think the whole House acknowledges our collective debt to the nurses of the NHS and I certainly acknowledge my own huge personal debt, and that’s why of all the professions in this country in very, very tough times we’ve asked the public sector pay review board to look at an increase in pay for nurses.

‘But above all to all nurses and I know what a tough year they have had, I know how hard it has been on the frontline coping with this pandemic, we have done what I think is the most important thing of all and that is to recruit many more nurses.

Ms McGee spoke out in a Channel 4 documentary about the coronavirus pandemic in the UK which is due to be broadcast on May 24.

Referring to the proposed one per cent pay rise, Ms McGee said: ‘We’re not getting the respect and now pay that we deserve. I’m just sick of it. So I’ve handed in my resignation.’

Laying into Number 10’s handling of the crisis, the nurse added: ‘Lots of nurses felt that the Government hadn’t led very effectively – the indecisiveness, so many mixed messages. It was just very upsetting.’

In a statement released on Tuesday through Guy’s and St Thomas’ NHS Foundation Trust, Ms McGee said: ‘After the toughest year of my nursing career, I’m taking a step back from the NHS but hope to return in the future.

‘I’m excited to start a nursing contract in the Caribbean, before a holiday back home in New Zealand later in the year. I’m so proud to have worked at St Thomas’ hospital and to have been part of such a fantastic team.’