Boy, two, who was mauled to death by three rottweilers is named

Boy, two, who was mauled to death by three rottweilers neighbours had nicknamed ‘the beasts’ is named as police continue probe into his death

A child who was mauled to death by his family’s three rottweilers – which locals nicknamed ‘the beasts’ – has been named.

Two-year-old Lawson Bond was savaged at home in the village of Egdon, Worcestershire, on March 28.

His family began driving him to hospital but were told to stop at Worcester Woods Country Park on the advice of the ambulance service.

He was rushed on blue lights to Worcestershire Royal Hospital before being transferred to Birmingham Children’s Hospital.

Lawson suffered a cardiac arrest as a result of his horrific injuries and died two days later on March 30.

The youngster has now been formally named following the opening of an inquest into the fatal attack.

West Mercia Police last week confirmed the three dogs, which were seized at the family home, have been destroyed.

Police say no arrests have been made and the investigation is ongoing. 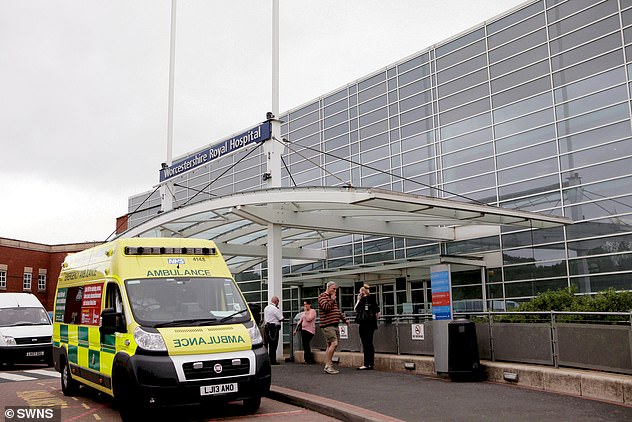 After being taken to Worcestershire Royal Hospital (pictured), the boy was transferred to Birmingham Children’s Hospital, where he died of his injuries two days later

Emotional tributes have been paid to Lawson in the days and weeks following his death.

Sue Hemming, of Worcester, said: ‘Huge high five, beautiful Lawson, you are so loved by so many, fly high little man. Sue & Felix.’

Donna George, of Worcester, said: ‘RIP Little man fly high with the angels. You will be sadly missed by all your family and friends.’

‘RIP little man, such a shame. Thinking about the family at this sad time,’ said Jodie Peglar, of Worcester.

Villagers and dogwalkers told how some people felt scared of the dogs.

One said: ‘Everyone keeps themselves pretty private around here and no one asks many questions. I think people are a bit intimidated by the family with those dogs. We call them ‘the beasts’ because they are always making such a racket.’

A pre-inquest review will take place at Worcestershire Coroner’s Court on August 31.

What is the Dangerous Dogs Act?

WHAT IS THE DANGEROUS DOGS ACT?

The Dangerous Dogs Act 1991 bans or restricts certain types of dogs and makes it an offence to allow a dog of any breed to be dangerously out of control.

It was introduced 30 years ago by Home Secretary Kenneth Baker ‘to rid the country of the menace of these fighting dogs’ after a string of attacks.

WHICH DOGS ARE BANNED IN THE UK?

It is illegal to own four breeds of dogs without an exemption from a court. They are:

The law also criminalises cross-breeds of the above four types of dog – meaning that whether a dog is prohibited will depend on a judgement about its physical characteristics, and whether they match the description of a prohibited ‘type’.

WHAT HAPPENS IF THERE’S A DOG ATTACK?

You can get an unlimited fine or be sent to prison for up to six months if your dog is dangerously out of control.

You may not be allowed to own a dog in the future and your dog may be destroyed.

And if you allow your dog to kill someone you can be sent to prison for up to 14 years or get an unlimited fine.

WHY IS THE ACT CONTROVERSIAL?

Both the Royal Society for the Prevention of Cruelty to Animals and the British Veterinary Association have protested against the ban, insisting there is no scientific evidence that all individuals of a breed are dangerous.

However, Met Police data suggests that in incidents involving ‘dangerously out of control dogs’, banned breeds account for about a fifth of offences.