A brewery has been left counting the cost for allowing a famous Banksy artwork to fade from the side of its building.

The world-renowned mystery street artist left a stencilled image of an origami-crane with a goldfish in its mouth in 2012 on the wall of a garage.

It was not known if it was a Banksy until it appeared on his official website two months later. 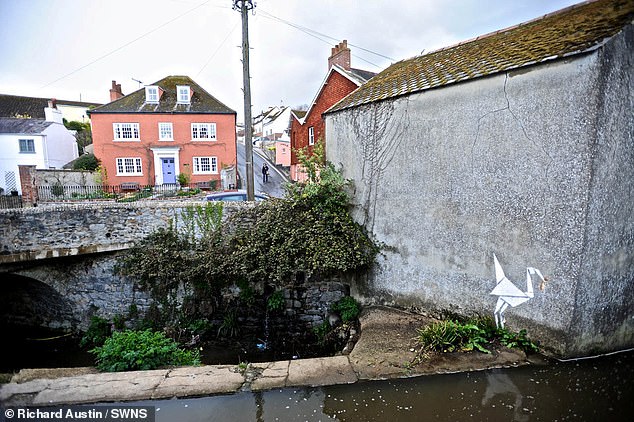 The Banksy in 2012 on the wall of the Palmers Brewery in Lyme Regis, Dorset

Specialist salvage builders are often employed by lucky Banksy owners to painstakingly chisel and slice art work from the wall using a diamond blade saw – removing the whole slab of plaster from the brickwork to sell as a whole.

However the cost of removing the artwork is not cheap.

Salvage company Sincura said the extraction of Girl with Red Balloon from a wall in east London cost around £28,500, with a further £40,000 spent on restoration, reports The Independent.

In 2004 the famous Banksy image of two police men kissing was removed from a Brighton pub’s wall – and later sold for £350,000 in the US.

Alternatively, and in the interests in community values, artwork can be preserved in the spot it was created – with a vandal proof glass shield placed over it.

But over time, the image next to the River Lym in Lyme Regis, Dorset, has faded.

And it is now barely distinguishable from the pale wall it was left on – potentially costing Palmers Brewery, which owns the building, hundreds of thousands of pounds.

Observers suggest the company, based in nearby Bridport, could have lost out on a huge potential payout after failing to cash in on the fading work.

Earlier this year, a piece done on a garage wall in Port Talbot – known as Season’s Greetings – sold for a six-figure sum after more than 20,000 people visited it over a three-week period.

And in 2014, a private collector bought a Banksy which was also painted on a wall for a whopping £403,000, saving the youth club next door.

No-one was available from the brewery to comment on why they have not cashed in on their prize asset but some suggest it could now be too late.

Banksy’s highest-selling work is believed to be Keep it Spotless.

The image of a Los Angeles hotel maid pulling up a defaced original Damien Hirst painting to sweep underneath it fetched an incredible £1.3m. 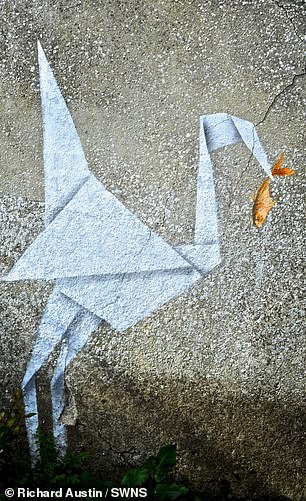 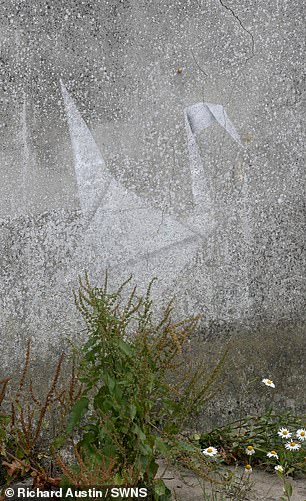 The world-renowned mystery street artist left a stencilled image of an origami-crane with a goldfish in its mouth in 2012 on the wall of a garage. As it was in 2012 (left) and as it is now (right)