Brexiteers are ‘insular, closed and selfish’ says Lib Dem leader Jo Swinson as she blasts ‘entitled Etonian’ Boris Johnson and ‘1970s socialist’ Jeremy Corbyn and claims Brexit is ‘the fight of our lives for the heart and soul of Britain’

Lib Dem clear lashed out at ‘insular, closed and selfish’ Brexiteers today as she branded Brexit ”the fight of our lives for the heart and soul of Britain’.

In her maiden leadership speech she tore into ‘entitled Etonian’ Boris Johnson and ‘1970s socialist’ Jeremy Corbyn over their positions on the UK’s departure from the EU.

She accused the Prime Minister of acting like a ‘socialist dictator’ over Brexit by shutting down dissent and ‘purging’ his opponents in the Conservative party.

But it came after she and her party were themselves accused of being undemocratic, after they voted overwhelmingly to revoke Article 50 and halt Brexit without a new referendum if they win a general election.

Addressing the party faithful in Bournemouth, Ms Swinson said: ‘At the next general election, voters will choose the sort of country we want to be.

‘Insular, closed and selfish, or collaborative, open and generous.

‘A politics of fear, hate and division, or one of respect, hope and inclusion.’

She added: ‘Ahead of us we have the fight of our lives for the heart and soul of Britain.’ 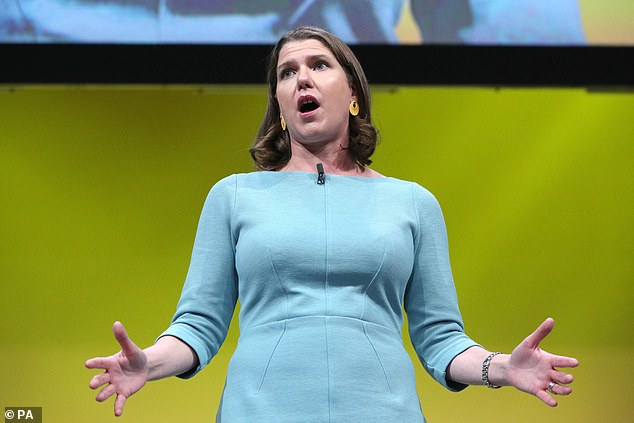 Addressing the party faithful in Bournemouth, Ms Swinson said: ‘At the next general election, voters will choose the sort of country we want to be’ 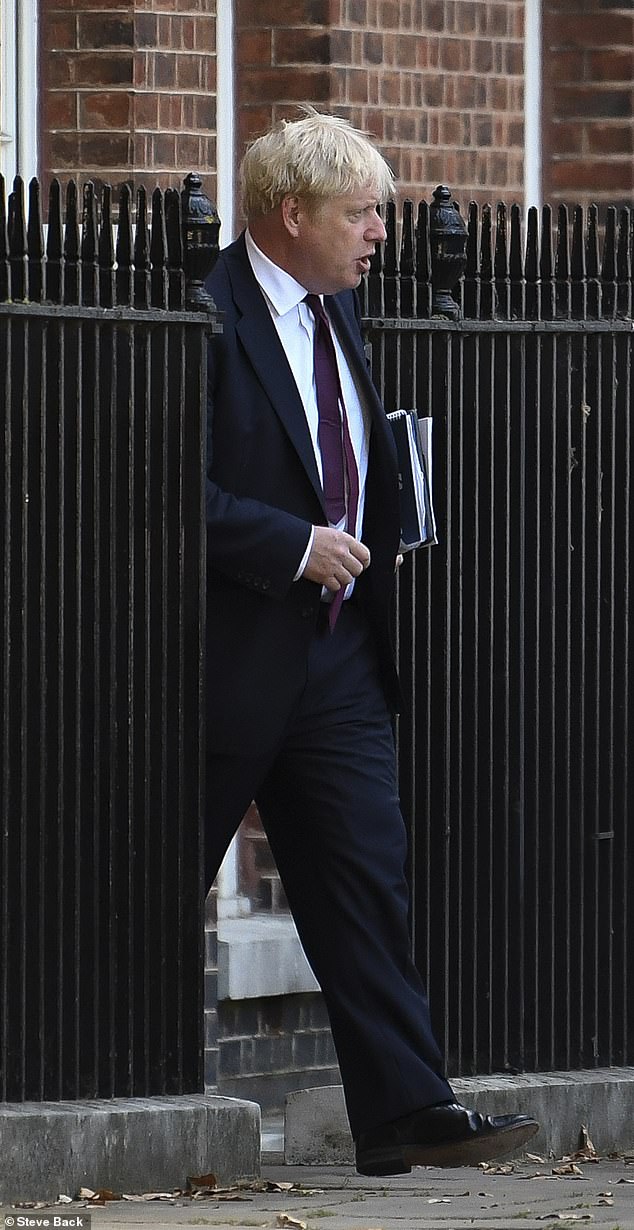 She accused the Prime Minister (pictured today in Downing Street) of acting like a ‘socialist dictator’ over Brexit by shutting down dissent and ‘purging’ his opponents in the Conservative party. 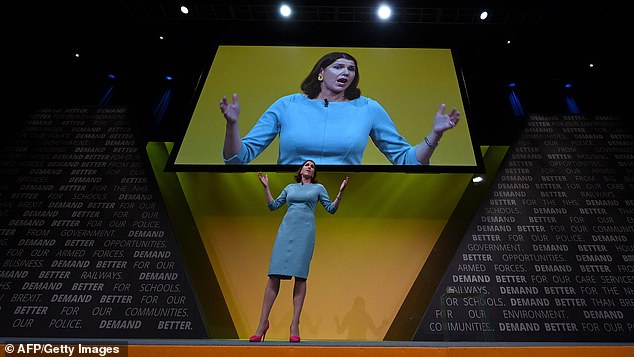 Ms Swinson added: ‘Ahead of us we have the fight of our lives for the heart and soul of Britain’ as she addressed the party conference

With her mother Annette Swinson and husband Duncan Hames watching from the front row she also tore into the Prime Minister’s decision to prorogue Parliament, which is the subject of a landmark Supreme Court case starting this morning.

And she waded into the expulsion of 21 Tory MPs after the voted to block a No Deal Brexit, which prompted one, Sam Gyimah, to join the Lib Dems this weekend.

Ms Swinson, who took over as leader from Sir Vince Cable in July, said: ‘(Boris Johnson) kicked 21 MPs out of the Conservative party, including the Father of the House Ken Clarke, and Churchill’s grandson Nicholas Soames, just because they dared to stand up to him.

‘There is even now the suggestion that he would break the law and refuse to ask for an extension to Article 50.

‘For someone who proclaims to hate socialist dictators, he’s doing a pretty good impression of one.’

Despite the result of the 2016 referendum, the Liberal Democrats are now committed to revoking Article 50 immediately if they win the next general election.

If the Lib Dems, who have only 18 MPs, do not win the next election, they would continue to push for a second referendum.

Yesterday the pledge prompted condemnation, including from some of the party’s own MPs and peers.

Ms Swinson was warned that she was ‘playing with fire’ by pledging to overturn a democratic vote by former health minister Norman Lamb. 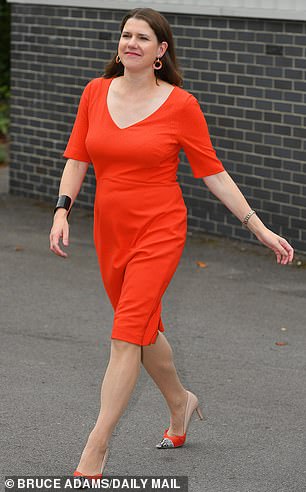 In her maiden speech as leader at the Lib Dem conference, Jo Swinson branded Boris Johnson a ‘socialist dictator’ and accuse both the Tories and Labour of having ‘failed’

The outgoing Lib Dem MP for Brexit-backing North Norfolk added that the policy was a ‘threat to the union’ and risked worsening the already ‘incredibly dangerous’ divisions in the country.

‘If we take this to the very limit in a situation where one side is vanquished entirely, there’s a danger that we break the social contract in our country,’ he told Radio 4’s Today programme.

He also warned against the Lib Dems being seen as ‘a single-issue party’.

More criticism came from Lord Paul Scriven, who tweeted: ‘Our new policy on Article 50 is wrong and we are boarding [sic] on becoming extreme on Brexit. We will not help to bring the country together if we unilaterally act in this way.’

He added: ‘I see the social chaos that Brexit has released. We need to deal with that. The new policy doesn’t and that’s why I can’t support it.’

Andrew George, who narrowly lost his St Ives seat in 2017, said: ‘Claiming we’d unilaterally stop Brexit without a referendum if we win the next general election is unnecessary, wrong and counter-productive.’

But in spite of the fierce reaction, Miss Swinson will today insist she can be Britain’s next prime minister and her party is prepared to ‘seize the opportunity’.

In her maiden speech she will accuse both the Tories and Labour of having ‘failed’ the country. 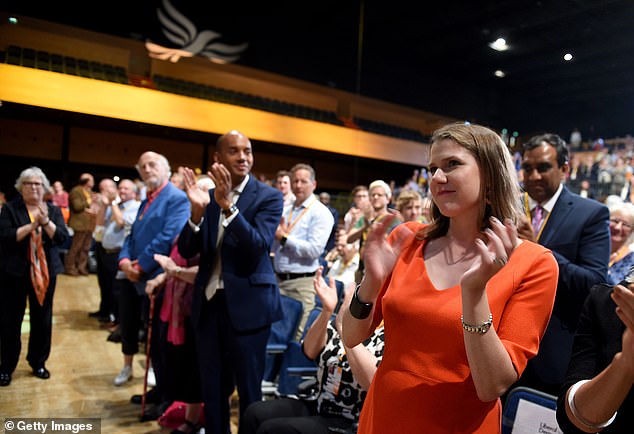 She will also say spending on no-deal preparations is ‘sickening’, adding, ‘The truth is you can’t plan for no deal.

‘Planning for no deal is like planning to burn your house down.

‘You might have insurance, but you’re still going to lose all your stuff.’

Footage has emerged showing how Jo Swinson previously argued for a referendum on EU membership.

In 2008, the Lib Dem leader was vocal in favour of an In/Out poll and criticised the EU for being inefficient, old-fashioned and cumbersome.

The images taken in Parliament reveal how she spoke out as the Lisbon Treaty, which was signed in 2007, created a more powerful European Parliament and a long-term President of the European Council. Miss Swinson was challenged on the treaty and if she would advocate a referendum on EU membership.

She then told MPs: ‘The Lib Dems would like to have a referendum In and Out of Europe.’

The footage was tweeted yesterday by Tobias Ellwood, Tory MP for Bournemouth, who said she has gone from calling for a vote to ‘completely ignoring’ the 2016 result.

Tory Party chairman James Cleverly commented: ‘The Lib Dems are determined to cancel the largest democratic vote in British history without so much as a whimper.’

It was ‘shocking’ they are ‘now so eager to trample over democracy’, he added. But Miss Swinson has repeatedly insisted it was right to try to cancel Brexit.

After the controversial vote, she said: ‘We will do all we can to fight for our place in Europe and to stop Brexit altogether.’

In her speech today, she will declare: ‘The tired old parties have failed. Our country needs us. We need to seize the opportunity now.

There is no limit to my ambition for our party. And today I am standing here as your candidate for Prime Minister.’

On Labour, she will say: ‘Nigel Farage might be Brexit by name but it is very clear that Jeremy Corbyn is Brexit by nature.’

Planning for No Deal is like ‘burning your house down’, she will add. ‘You might have insurance but you’re still going to lose all your stuff.’ 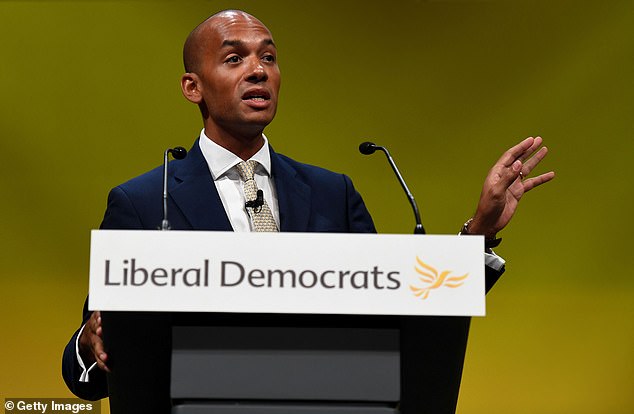 ‘How happy are you?’: Lib Dems plan ‘well-being budget’ that would ask people how satisfied they are with their lives to help decide how to spend billions of pounds of taxpayers cash

The public would asked how ‘happy’ and ‘satisfied’ they are with their lives as part of a Lib Dem plan for a well-being budget if they win the next election.

Leader Jo Swinson unveiled the programme as she addressed the party conference today, saying success as a nation should not be ‘reduced to a GDP figure’.

The idea is based on one unveiled by New Zealand prime minister Jacinda Ardern in May, which will see the nation spend splash 26.5billion dollars over the next four years on tackling suicide rates, child poverty, homelessness and domestic violence.

The high-spending budget has attracted attention across the globe – Labour is also promising something similar – but critics fears it will lead to national debt and tax increases.

The Lib Dem plan also draws inspiration from a ‘well-being survey’ introduced in 2011 when the Liberal Democrats were in the Coalition government with David Cameron’s Conservatives.

Ms Swinson told the conference: ‘We have been conditioned to believe that as long as GDP keeps growing, everything is fine.

‘But this ignores the reality behind the numbers, that the social contract is broken – that working hard and playing by the rules is no longer enough to guarantee a better life. 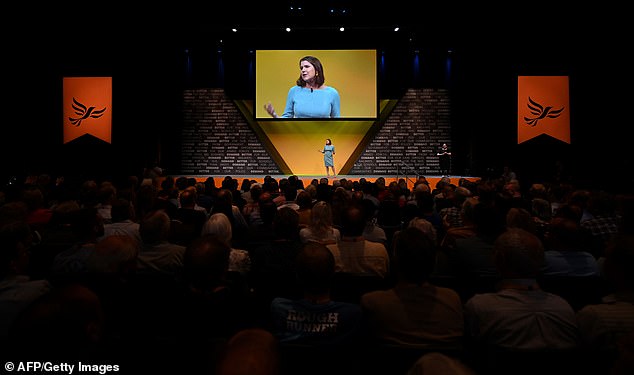 Ms Swinson told the conference: ‘We have been conditioned to believe that as long as GDP keeps growing, everything is fine’ 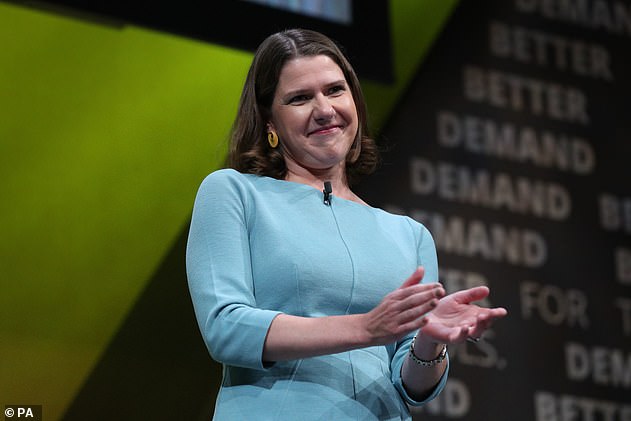 She added tha GDP ‘measures everything in short, except that which makes life worthwhile’ as she announced the idea

‘That our planet is at breaking point … it measures everything in short, except that which makes life worthwhile.’

The Coalition survey cost £2million and took several months, after which it concluded that most people were happy.

The investigation ordered by David Cameron found that three quarters placed themselves at seven out of ten or higher on a scale of well-being.

It also revealed that while divorcees and the unemployed are often considered more vulnerable to depression and despair, most actually consider themselves as happy as everyone else.

Critics used the findings as evidence that the state’s attempt to measure the happiness and wellbeing of the nation was both sinister and unnecessary. 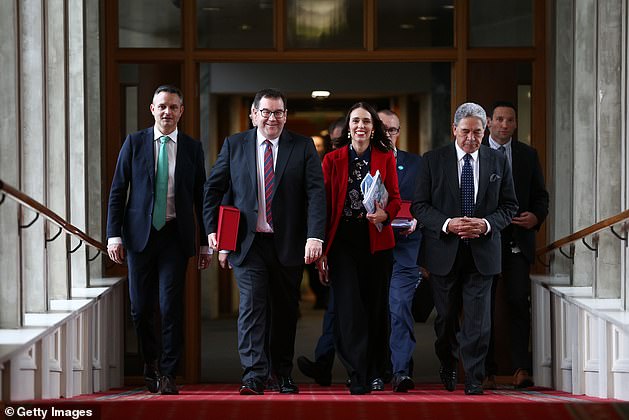 A Lib Dem spokesman said that the questions used by its budget would recreate those used by the survey and academics worldwide.

The budget would be overseen by the Treasury like the fiscal budged, he added.

‘In the same way that every government policy has an equality impact assessment, every one, there would just be a wellbeing assessment,’ he said.

‘It wouldn’t be the sole arbiter of what we do but it would be part of the mix when we consider those things.’