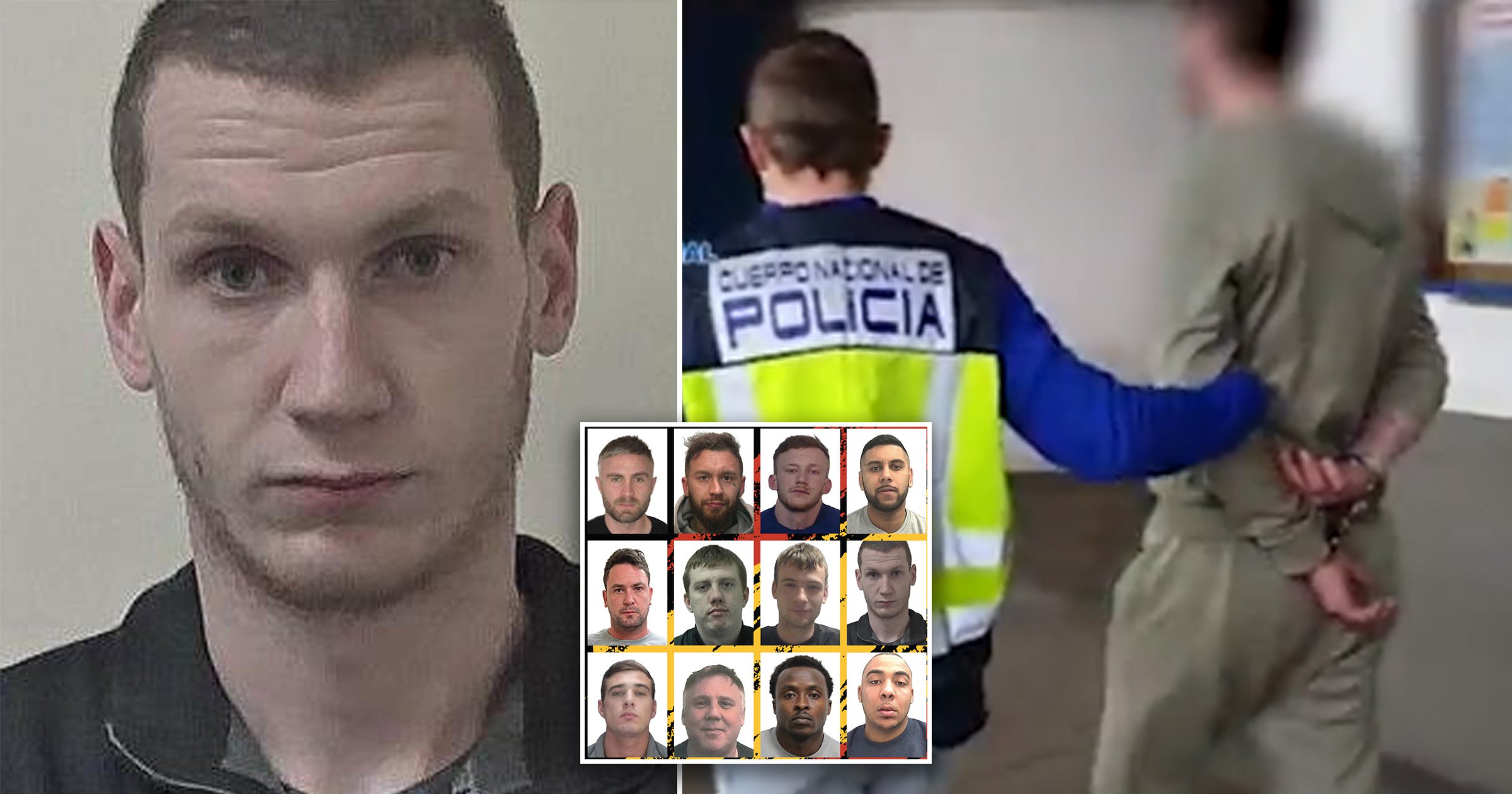 An alleged drug trafficker from Liverpool has been arrested in Spain just 24 hours after he was named as one of Britain’s most-wanted fugitives.

Joshua Hendry, 30, was detained while walking his dog in Marbella on Thursday evening after an off-duty police officer recognised him from an appeal.

He is to be extradited to the UK under an international arrest warrant on charges of trafficking heroin and cocaine while a member of a Merseyside crime gang with his mum and brother.

His mother, 49-year-old Leslie Aytoun, controlled a phone used to coordinate orders with drug users in Grimsby, according to Humberside Police.

She was jailed last summer for 11 years after admitting two counts of conspiracy to supply Class A drugs between 2017 and 2019.

Younger brother Scott Hendry, 27, who controlled drug runners in Grimsby, was jailed for 14 years for the same offences.

Joshua Hendry is also wanted over a separate conspiracy to supply cocaine in May 2018, for which he was sentenced in his absence to 10 years’ imprisonment in March 2019.

He boarded a plane to Barcelona before the start of the trial, GrimsbyLive reported last year.

Spanish police have released a photo of the 30-year-old being led away in the town of San Pedro de Alcantára.

The appeal, launched by the National Crime Agency (NCA) and charity Crimestoppers in partnership with Spanish police on Wednesday, listed 12 most-wanted suspects thought to be hiding in Spain.

Tom Dowdall, NCA Deputy Director of International, said: ‘This is a rapid result and it’s testimony to the power these appeals can have as well as the NCA’s international reach.

Who are the 11 other most-wanted in Spain?

The 41-year-old is wanted by Essex Police over the drive-by killing of Robert Powell.

Oppong is described as black, athletic, and has various scars including two circular marks above his right eye, a series of small scars on his left hand and fingers, and a scar near his navel.

His last known address was in Newham, east London, and he has links to Marbella.

The 27-year-old is wanted by Greater Manchester Police in connection with the 2018 murder of rival drug dealer Luke Graham, 31, in a turf war, and the attempted murder of Anton Verigotta.

His last known address was in Beede Street, Openshaw, Manchester, and he is white, around 6ft, athletic, with a fair complexion.

The NCA said he may have a lazy eye. He has links to Spain and possibly Turkey.

Macann, 32, whose last known address was in Beetley in Norfolk, is wanted by police in the county for allegedly being involved in a cocaine dealing gang.

He is white, 5ft 10in, has blue eyes and greying hair, and suffers from asthma. He has links to Barcelona.

The 30-year-old, from Croydon, south London, allegedly sold substances including class A drug MDMA via a phone line in south London called the Flavour Quest, and on the dark web.

The vegan gym regular, whose last known address was in Caterham, Surrey, is white, around 5ft 11in and muscular.

He is heavily tattooed – his neck is covered with warriors and religious figures on horses, and he has a full back tattoo.

Mayle has a diamond-shaped tattoo under his left eye, ‘Croydon’ tattooed on the outside of his left forearm, and his hands are also covered in images.

His left hand has the words ‘Money never sleeps’, ‘12-20’ and a small heart, while his right is decorated with a design featuring an eye and hands, and the word ‘Littles’.

On both hands he has tattoos on his fingers reading ‘trap star’.

Naveed, 29, who is muscular and 6ft 2in, is accused of being the leader of a drug smuggling gang that brought 46kg of cocaine, worth nearly £8 million, into Wales between February and June 2020.

His last known addresses were in Butetown and Pentwyn, Cardiff. Naveed, who is described as Asian, has a surgical scar along his left wrist.

The 32-year-old, who has gold upper teeth, is accused of buying cocaine from Naveed and selling it in Cardiff.

His last known addresses were in Ely, Sully and Barry in Cardiff. He is black and around 5ft 11in.

Jones, 31, was last known to have lived in the UK in Aughton, Lancashire. He is wanted for allegedly stabbing two victims multiple times, causing serious injuries.

It is thought that Jones, who is white, around 6ft, and stocky with dark hair, fled to Madrid directly after the attack, and may now be in Ibiza.

The 23-year-old is wanted by Northumbria Police for allegedly being involved in drug dealing as well as assaulting an emergency worker, affray and dangerous driving.

His last known address was in South Shields, and he is slim, white, around 5ft 11in, with fine hair, blue eyes and a Tyneside accent.  He has links to Alicante and Marbella.

Garforth, 29, whose last known address was in Dingle, Liverpool, is wanted by Cheshire Police for being part of a crime gang that sold drugs and guns.

He is accused of having used the secret phone network Encrochat, that was brought down in an international sting, to carry out his crimes.

Roberts, 28, also from Liverpool, is wanted for GBH and attempted robbery in 2016.

He and an accomplice allegedly threatened the victim with a knife on his driveway at 1.30am in a bungled attempt to steal his £60,000 Richard Mille watch.

When the victim refused to hand it over, the pair are said to have stabbed him multiple times, leaving him with a collapsed lung and needing treatment in intensive care.

Roberts, who is white, 6ft 1in and has a scar down his right leg, cut his arm during the attack and was identified when his blood was recovered from the victim.

The Scotsman, 56, is wanted by the National Crime Agency and Police Scotland over the seizure of approximately one tonne of cocaine and 28 million Etizolam ‘street Valium’ tablets.

The cocaine was found in a shipment at the Port of Dover in September 2020 and the tablets were seized following a raid on a suspected pill factory in Kent in June 2020.

Stevenson, who is white, stocky and has a scar on the left side of his face, is also wanted in connection with two suspected arson attacks in Lanarkshire and Forth Valley in May 2020.

His last known address was in Rutherglen, Glasgow, and he is around 5ft 9in with grey hair. He has links to Barcelona and Alicante.

‘Whether it’s using tip-offs from the public, sharing intelligence or deploying specialist capabilities, UK law enforcement and our Spanish partners are working as one to trace and arrest the other 11 fugitives.

‘Those men will know now that we’re after them. They can live their lives anxiously looking over their shoulders and wondering if today’s the day they get caught or they can do the right thing and hand themselves in.’