Britain will deny asylum to migrants who board boats: report

The British government will routinely deny asylum to migrants who board boats to cross the English Channel or come to Britain through illegal routes, according to a report.

Under new laws that will be unveiled by Britain's interior minister Priti Patel on Sunday, local time, the government will unveil its "fair borders bill," outlining its plan of a two-tier system in which migrants are treated differently if they pay criminal gangs to help them come to Britain, The Sunday Times said. 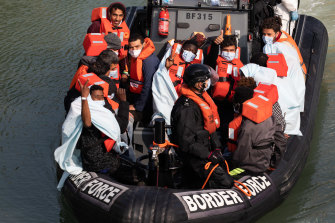 British Border Force officials take migrants who have been intercepted in the English Channel for processing in September, in Dover, England. Credit:Getty Images

New legal routes will be created for those who are at genuine risk of harm, and foreign criminals and asylum seekers who are not at risk will be deported, the report added.

"Currently, everybody that comes to our country and makes an asylum claim, they are treated the same, irrespective of the route through which they have entered our country – and that simply isn't right," Patel said in an interview with the London-based newspaper.

It follows a report in the London Telegraph last week that the government intended to make asylum seekers who arrived by boat "inadmissable".

Patel reportedly told Tory MPs on a Zoom conference call six weeks ago that the asylum system was "broken", as she promised to introduce laws that would "send the Left into meltdown".

This move will replace the Dublin agreement, whereby the country where an asylum seeker enters the EU is responsible for examining their claim.

The new post-Brexit framework would follows recent concerns about the number of asylum seekers crossing the Channel.

"If you come through the EU, an asylum claim would be inadmissible because you should have claimed it in the first country," a source told the Telegraph.

Last week the British government came under fire after media reports revealed it had studied housing asylum seekers on Ascension Island, on disused oil rigs, banishing them to camps in Moldova or Papua New Guinea, or building floating walls in the sea to keep them out.