Britain's coronavirus deaths could be 80% HIGHER than figures show

The true number of coronavirus victims in England could be 80 per cent higher than official figures show because of a lag in the way deaths are recorded.

By March 27, the Department of Health and Social Care had declared just 926 COVID-19 fatalities in hospitals around the country.

This was 78 per cent lower than the 1,649 deaths recorded by NHS England during the same time frame.

If the ratio has followed the same trajectory since then, England’s true death toll could be around 8,800 instead of the official 4,897.

This is because it can takes days – or in some cases weeks – for a coronavirus death to be reported, recorded and fed back to the Government’s overall tally.

Meanwhile, statistics show COVID-19 is now responsible for almost one in 20 of all deaths every week in England and Wales. 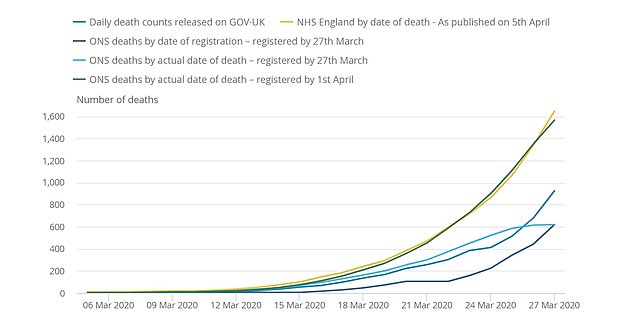 The true number of coronavirus victims in England could be 80 per cent higher than official figures show. The Government (in dark blue) declared just 926 fatalities by March 27, compared to 1,649 deaths recorded by NHS England (yellow) 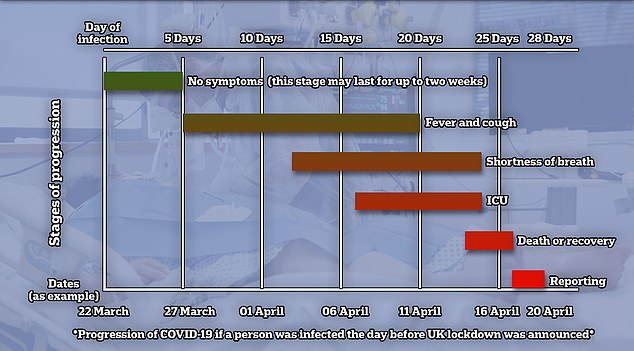 There can be a time lag of more than three weeks between someone becoming infected with coronavirus and dying. Symptoms take days – if not weeks – to become life-threatening. The death has to be recorded and reported, and the family notified, in a process that takes days

The Office for National Statistics (ONS) figures are based on the number of fatalities where COVID-19 was mentioned on the death certificate as a factor.

Coronavirus was not necessarily the cause of death for every one of the patients, but was believed to have played a role.

A total of 11,141 deaths from all causes were registered in England and Wales in the week ending March 27. Of those, the killer virus played a role in 539  deaths (4.8 per cent).

The ONS also found that almost all (93 per cent) of COVID-19 sufferers die in hospitals, with the remainder occuring in hospices, care homes and private homes.