Britain’s economy flatlined before the coronavirus outbreak in its weakest performance since the wake of the 2008 financial crash, new figures revealed today.

There was zero GDP growth in January after the economy grew by 0.3 per cent in December, confounding experts who had expected the economy to grow by 0.2 per cent at the start of 2020.

The average growth in the three months to January was also zero, the third month in a row that the three-month measure of GDP was flat, according to the Office for National Statistics (ONS).

It is the weakest such run since the middle of 2009 when Britain was reeling from the global financial crisis.

The numbers were released this morning ahead of Rishi Sunak’s debut Budget which will be dominated by measures to combat the economic hit of the global coronavirus outbreak.

The Bank of England this morning cut interest rates from 0.75 per cent to 0.25 per cent and announced other emergency stimulus measures to offset the economic hit from the virus, which has killed six people in the UK. 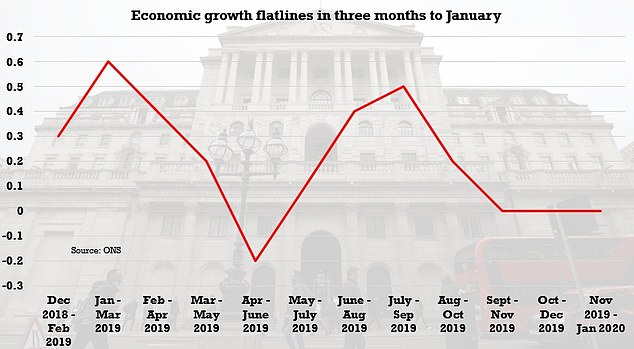 The average growth in the three months to January was zero, the third month in a row that the three-month measure of GDP was flat, according to the Office for National Statistics 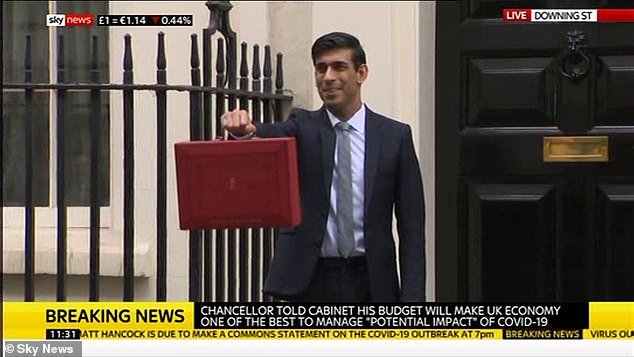 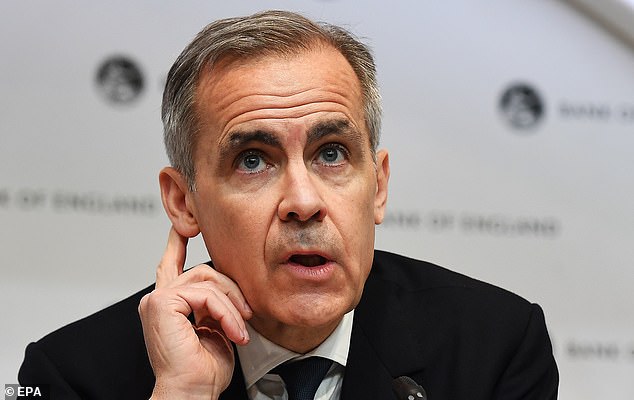 The worst-hit was the construction sector, which lost 0.8 per cent, a swing from a 0.4 per cent rise in December last year.

However, over the last three months, construction still saw higher growth, by 1.4 per cent, compared to services, which flatlined, and production, which fell by 1 per cent.

Commenting on the three-month figures, the ONS’s head of GDP Rob Kent-Smith said: ‘The economy continued to show no growth overall in the latest three months.

‘Growth in construction, driven by housebuilding, offset yet another decline in manufacturing, particularly the drinks, cars and machinery industries.

‘The dominant service sector also showed no growth in the latest three months with falls in retail and telecoms balanced by strength in rentals, employment and education.’

The ONS said last month that GDP growth slowed to a standstill in the last quarter of 2019 after a 0.5 per cent rise in the period before.

As they are for January only, the figures do not take into account the major impact the the coronavirus might have on the British economy.

The first cases started in China in December but it took weeks before the disease started impacting on the economy.

The Office for Budget Responsibility’s forecasts for the deficit, debt, GDP and productivity will also be revealed on Wednesday, potentially shedding some light on how Brexit may affect the economy.

The BoE said this morning that it was taking action, supported by all nine members of its main Monetary Policy Committee, to ‘help support businesses and consumer confidence at a difficult time.’

The cut takes the main rate to the record low it stood at in the aftermath of Britain’s vote in June 2016 to leave the European Union.

Mark Carney, who is leaving his post as governor at the bank next Monday, said the measures were designed together with the British Treasury.

‘These measures will help keep firms in business and people in jobs,’ he said.

Carney said the rate cut will support cash flow for businesses and households and support confidence in the economy at a time of ‘temporary but significant’ disruptions in the supply chain.

The new funding scheme could make available 100 billion pounds to businesses, he said.

The cut follows similar reductions from the US Federal Reserve and the Bank of Canada.

The European Central Bank is also expected to announce a package of stimulus measures on Thursday.

In contrast to Italy, the epicenter of Europe’s outbreak with 10,100 cases, Britain has only 373 confirmed cases of COVID-19 and six deaths.

But the impact of the outbreak has already slammed European airlines, airports and travel-related businesses, as air passenger numbers sink rapidly and travelers avoid cruise ships. Many businesses in the U.K. depend on tourism.

The Bank of England said the effect of the new coronavirus on the British economy could be significant, with activity likely to ‘weaken materially’ in the coming months. Growth projections have been slashed for all major economies around the world as the virus halts production and dents business and consumer confidence.

‘Temporary, but significant, disruptions to supply chains and weaker activity could challenge cash flows and increase demand for short-term credit from households and for working capital from companies,’ the bank said. ‘Such issues are likely to be most acute for smaller businesses.’

In addition to the rate cut, the bank announced a package of measures that it hopes will keep money flowing through the economy. It unveiled a new funding scheme that will focus particularly on small- and medium-sized firms and also slashed to zero from 1% the amount of capital that banks have to keep in reserve, a move that is designed to bolster lending.

It said its proposals were a ‘comprehensive and timely package of measures to help U.K. businesses and households bridge across the economic disruption that is likely to be associated with COVID-19.’