Britney Spears fights to remove father from conservatorship in court

Britney Spears is fighting for her freedom from her father who has conservatorship over her and her $60million fortune in a critical hearing Tuesday afternoon in Los Angeles.

Though the pop star has been absent from the stage and screen, she’s been making moves in court to regain control of her life and assets after being under conservatorship for 12 years.

Her father James Spears was co-conservator with attorney Andrew Wallet for 11 years. Last year James was left entirely in charge until he partially stepped down due to health reasons, but he is still conservator of her finances.

In court filings this month she said she wants ‘neutral’ wealth manager Bessemer Trust appointed as her ‘sole conservator’ because her father is unwilling to share control of her more than $60million in assets.

The 90s starlet was slated to participate in the Tuesday afternoon hearing via phone due to coronavirus restrictions. Judge Brenda Penny will hear arguments in the case.

In the hearing Spears will request a new conservator, request transparency in future court decisions and will object to certain accounting reports that will be made at the hearing.

On Tuesday new legal documents revealed that Spears believes her father gave $309,000 to her former business manager Tri Star Sports & Entertainment Group in 2019 without letting her know and despite her being on a work hiatus.

Britney Spears, 38, is fighting for her freedom from her father who has conservatorship over her and her $60million fortune in a critical hearing Tuesday afternoon in Los Angeles

Spears is seeing to remove her father as co-conservator saying he’s unwilling to share control of her more than $60million in assets and she’s seeking transparency in the court’s moves over her conservatorship. He’s been her conservator for 11 years

The documents state that Tri Star got paid a five percent commission on her gross entertainment-related income but it took a hit when she stopped performing in early 2019.

The group then emailed James Spears in November 2019 and asked to remain on the five percent commission plan with a $500,000 annual minimum.

The singer claims her father approved of the arrangement without attempting to negotiate and in doing so robbed her of $308,974.51, the sum sent to Tri Star for services in 2019, which amounts to a 260 percent raise, according to TMZ.

She is looking to disallow the payment and credit it back to her.

In court documents filed in August Spears said she wanted Jodi Montgomery, her longtime care manager, to become her permanent conservator. She was appointed as temporary conservator last year when James fell ill.

Spears will also ask for more transparency in the court’s moves, which are often kept secret.

The conservatorship, known in many states as a guardianship, began in 2008 when she was having serious mental struggles and an often public meltdown.

The arrangements are normally limited to people with severely diminished ability to make decisions for themselves, and are meant to be temporary, but Britney Spears, 38, has remained under court control longer than anyone expected.

She has acknowledged that the arrangement was necessary when it began, and probably saved her career, and she remained silent both in public and in court for nearly all of its existence.

At first it was initiated following a 2007 incident where Spears shaved her own head in public. The second phase of conservatorship took place when she spent years touring and performing at her Las Vegas residency. 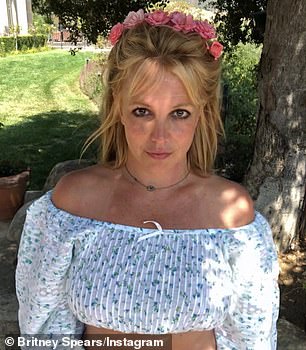 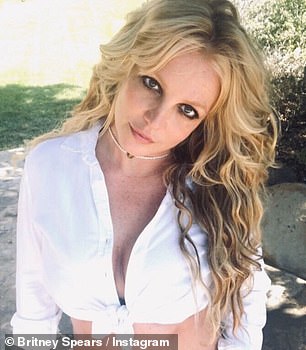 Latest Instagram posta: Spears posed in a flower crown and an off shoulder top on Instagram on Monday (left) and in a sulty white button down top last week (right) 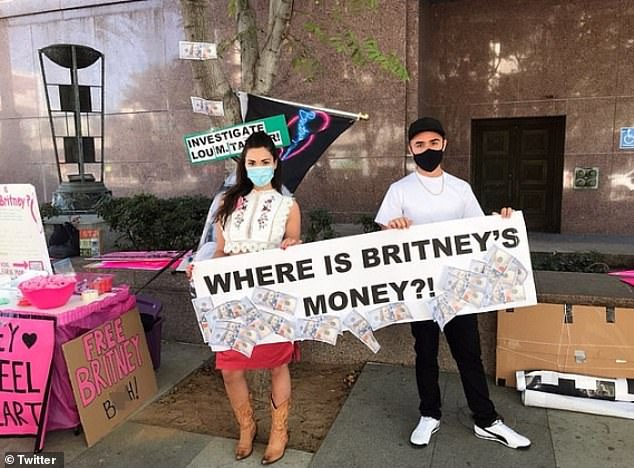 The #FreeBritney movement is fueled by the singers fans who demand the court free her from her father’s conservatorship, arguing he’s controlling her wealth and life. A view of her supporters outside the LA Courthouse on Tuesday afternoon above holding a poster that says ‘Where is Britney’s Money?!’ 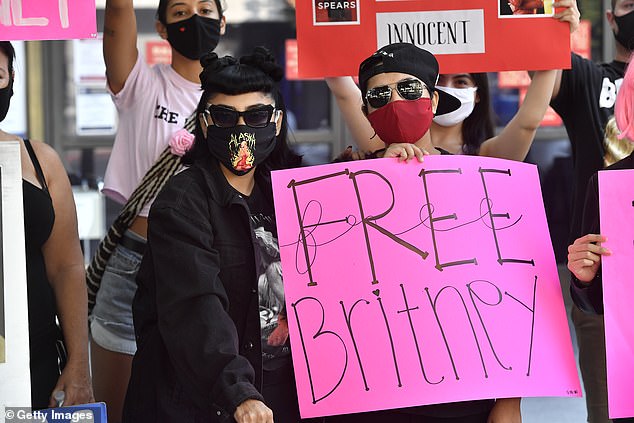 The third phase is underway now as Spears no longer wants to perform. She argues: ‘We are now at a point where the conservatorship must be changed substantially in order to reflect the major changes in her current lifestyle and her stated wishes.’

In August Spears began publicly seeking to choose who oversaw her life and money as the #FreeBritney movement among her fans grew, demanding she have more freedom and autonomy over her assets.

In August of this year, Britney Spears said she strongly objected to her father returning as conservator of her person.

In September she went even further, asking that a corporate fiduciary, the Bessemer Trust, become conservator of her finances instead of her father.

Britney’s younger sister Jamie-Lynn has also filed to become the custodian of the conservatorship.

James Spears first filed to have Wallet return as his co-conservator instead, but Wallet withdrew after Britney Spears objected.

He subsequently said he would work with the Bessemer Trust, but now Britney Spears is insisting that such an arrangement would be ‘doomed to failure’ and her father needs to be out entirely. 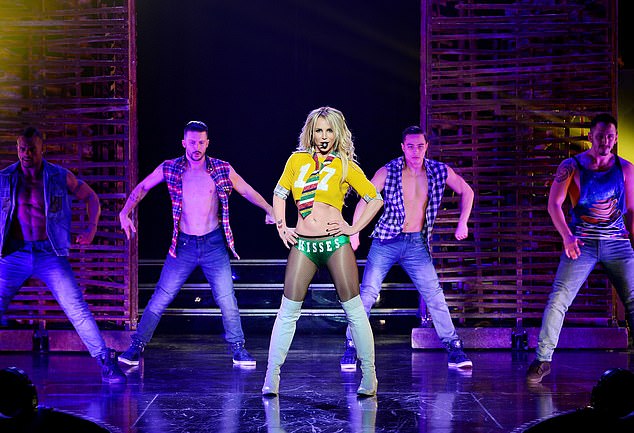 The ‘Toxic’ singer is asking the court to appoint a ‘neutral’ wealth manager, for transparency in court decisions, and for Jodi Montgomery, her longtime care manager, to become her permanent conservator. Pictured above performing in Las Vegas in February 2016

She also said that her father failed to notify her that her business manager resigned and that he appointed a new manager.

In his own filings, James Spears argued that he has done his job well, taking the estate from being in debt and facing tens of millions in lawsuits to its current value of over $60million.

‘Mr. Spears is doing exactly what he is supposed to be doing as conservator of the estate; he should be commended, not suspended,’ one court filing said. 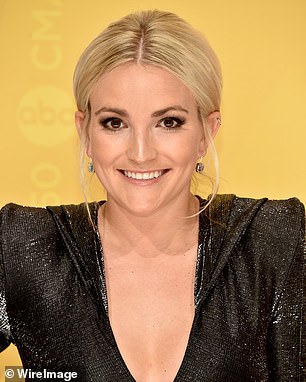 James Spears did all this, the filing argued, while working hard to restore his daughter ‘to good health, reunite her with her children, and revive her career.’

‘Throughout his service as Conservator, Mr. Spear’s sole motivation has been his unconditional love for his daughter and a fierce desire to protect her from those trying to take advantage of her,’ the filing said.

It is not clear whether Judge Brenda Penny will make any decisions Tuesday. She may seek time to reach decisions or ask that arguments continue on another date.

The proceedings are likely to be closed to the public and media, as Penny has routinely done at the request of James Spears and his attorneys, who have argued for his daughter’s need for privacy.

But in her recent spate of filings, Spears has said she has gotten more privacy than is good for her, arguing that the secrecy has not been helpful, and welcomed the scrutiny of the #FreeBritney movement, which her father has scorned.

In court documents, Britney Spears said, ‘Far from being a conspiracy theory or a “joke” as James reportedly told the media, in large part this scrutiny is a reasonable and even predictable result of James’ aggressive use of the sealing procedure over the years to minimize the amount of meaningful information made available to the public.’