The Met Office said some people face very heavy rainfall, leading forecasters to issue a yellow alert for up to 70mm (2.8in) of rain. The warning, for the east of England from 6am to midnight, means a chance of homes and businesses being flooded and transport disrupted. A spokesman added: “An area of rain is expected to move north-eastwards across much of England on Tuesday, with thunder in a few places – 15 to 25mm of rain is likely quite widely with up to 40mm in a few places, leading to some flooding.

“There is a small chance that this rain will be especially intense in a few places with 50 to 70mm possible.

“The rain will clear slowly north-eastwards during the day, perhaps lasting into the night across parts of Lincolnshire and Yorkshire.” Temperatures will creep up today to around 68F (20C) in the South of England, 63F (17C) in the North. By Thursday highs may hit 75F (24C).

Forecaster John Hammond, of weathertrending, said: “Winds from southern latitudes could send the mercury into the mid-20s – just like last week. Some may welcome another fine spell after a poor August.”

The temperature for mid-September is usually around 64F (18C). 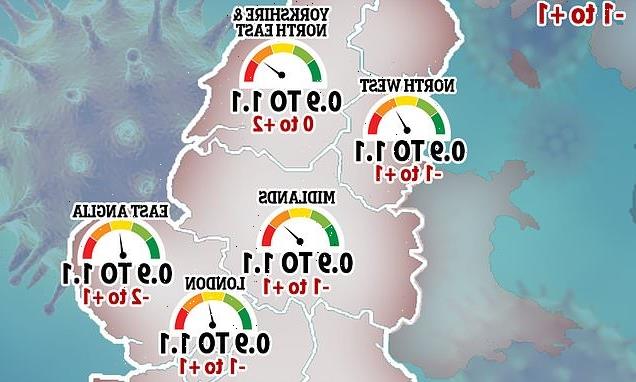