Texas police on Thursday arrested a suspect in connection with a mass shooting that left at least one dead and multiple people injured, including a Texas Department of Public Safety (DPS) trooper, authorities said.

Bryan Police Chief Eric Buske told reporters he believes the shooting suspect is an employee at the business.

By the time officers arrived, the shooter was gone.

“At this site, when law enforcement showed up it was already over with,” Bryan Police Lt. Jason James said earlier.

Employees of the cabinet-making business were being interviewed and witnesses had identified a suspect.

The Bureau of Alcohol, Tobacco, Firearms and Explosives sent dogs to the scene of the shooting, said spokesman Deon Washington.

The wounded were taken to St. Joseph Health Regional Hospital as authorities launched a manhunt for the shooter. 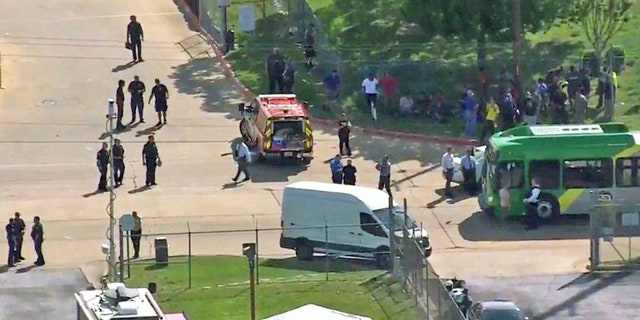 Texas police arrested a suspect in connection with a mass shooting that left at least one dead and multiple people injured, including a Texas Department of Public Safety trooper.
(KRIV)

Texas DPS said one of its troopers was shot while pursuing “an individual suspected of being involved in the shooting. The trooper remains in serious but stable condition, the agency said.

The exact circumstances of the suspect’s arrest remain unclear.

Texas Gov. Greg Abbott released a statement in response to the shooting, saying that he has been “working closely with the Texas Department of Public Safety and the Texas Rangers as they assist local law enforcement on a swift response to this criminal act.”

“Their efforts led to the arrest of the shooting suspect. The state will assist in any way needed to help prosecute the suspect,” Abbott said. “Cecilia and I are praying for the victims and their families and for the law enforcement officer injured while apprehending the suspect.”

Bryan, a town of about 84,000 people, is about 100 miles northwest of Houston and next to College Station, home of A&M University.