Bulgaria has raised eyebrows by sending out its first batch of coronavirus vaccines in a fleet of hot dog trucks.

Boxes of the Pfizer/BioNTech vaccine were lifted out of sausage vans after the EU nation received its first 10,000 doses of the jab – which are being stored in old Soviet fridges to keep them at their required low temperatures.

Images of the police-escorted hot dog trucks sparked mockery online, with viewers mocking up pictures of a pack of Frankfurters emblazoned with a Pfizer logo.

But Bulgaria’s health minister rejected the ridicule, saying the jokes were ‘inappropriate’ and insisting that the vaccines had been properly transported. 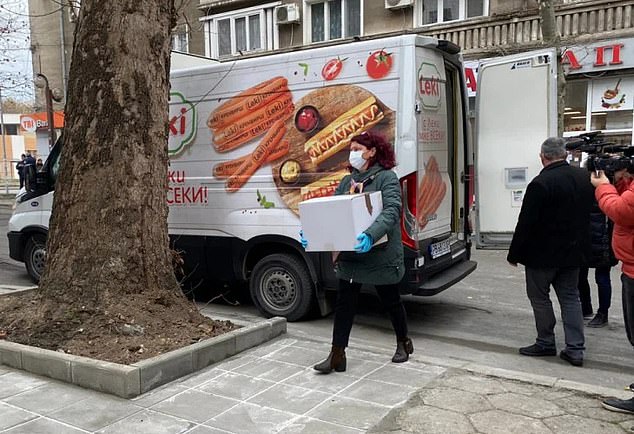 Special delivery: A box of Pfizer/BioNTech vaccines is lifted out of a hot dog van in Plovdiv, Bulgaria, which began its Covid-19 vaccination programme at the weekend 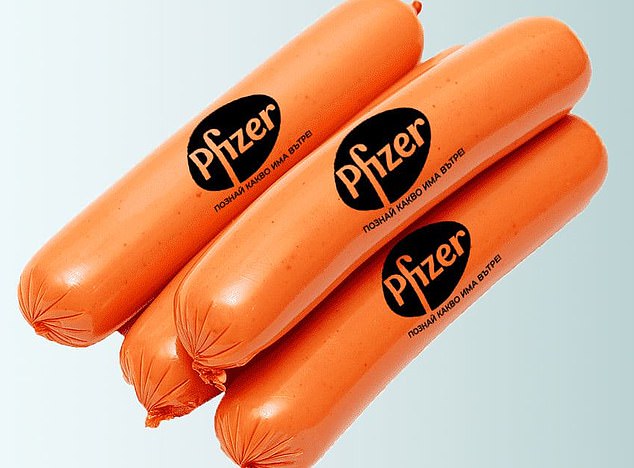 Ridicule: Social media users mocked up an image of a pack of Frankfurters emblazoned with the Pfizer logo after the sausage trucks were used to distribute the vaccine

‘Bulgaria is not the only country where private logistics companies provide transportation,’ said health minister Kostadin Angelov, according to the New York Times.

However, he said that the next shipments of the vaccine would be delivered using vehicle supplied by the manufacturers.

Angelov rejected the sausage jokes as ‘unacceptable’ – after many Bulgarians made light of the vans and asked if people would ‘want some kraut with your vaccine’.

Mariya Sharkova, a healthcare lawyer, said she feared that the vaccine programme becoming a ‘target of ridicule’ would reduce take-up.

‘There are many people outside of the anti-vax movement who are hesitant to get vaccinated,’ she said, adding that the hot dog trucks would not ‘defuse their fears’.

One survey suggested that as many as 45 per cent of people would not get a shot, and 40 per cent plan to wait to see if any negative side effects appear.

The first batch is of fewer than 10,000 shots, but Bulgaria expects to receive another 57,000 in January and more after that in the country of seven million. 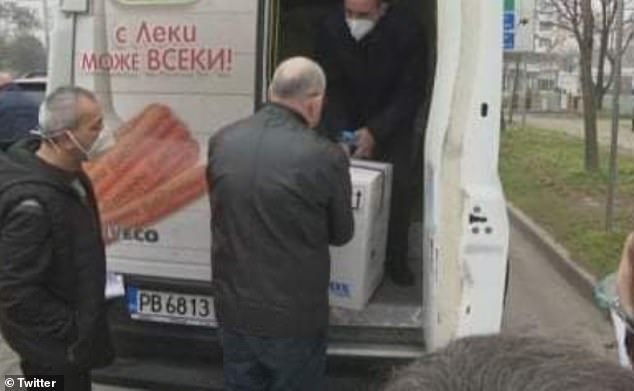 Some of the boxes are removed from sausage vans after Bulgaria received its first 10,000 doses of the coronavirus jab 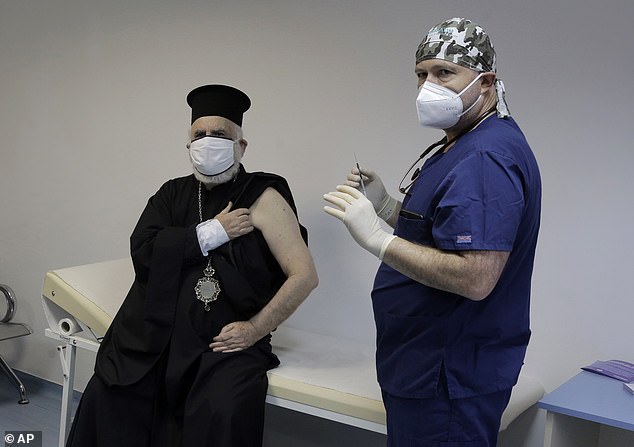 Bishop Tihon, an Orthodox clergyman in Bulgaria, receives a shot of the Covid-19 vaccine at the St Anna Hospital in Sofia on Sunday

Bulgaria earlier this month extended a winter lockdown until January 31, meaning that schools, restaurants and shopping malls will stay closed into 2021.

Infections have come well down from their November peak, but the death rate is significantly higher than in nearby countries such as Turkey, Greece and Romania.

Just over 200,000 cases have been confirmed in total in Bulgaria, with 7,515 deaths linked to Covid-19 since the pandemic began.

Some of the vaccine vans were seen arriving in Plovdiv, where some of the first patients were vaccinated as the EU-wide immunisation scheme began last weekend.

Among the first recipients was a Christian Orthodox clergyman, Bishop Tihon, who said he was ‘vaccinated against everything I can be’.

He spoke about anxiety over polio before vaccination became available in the 1950s and 1960s.

‘We were all trembling in fear of catching polio. And then we were overjoyed,’ he said. ‘Now, we have to convince people. It’s a pity.’

It came after an EU regulator finally gave approval to the Pfizer jab on December 21, more than two weeks after the UK.

Britain has delivered more vaccines than any other European country so far. While the US has vaccinated the most people outright, Israel has the best per-head rate.