Victoria’s crime rate fell by 12.6 per cent last year, with data showing fewer burglaries and less drug trafficking, but police expect crime to increase as the state returns to normalcy in the wake of the pandemic.

Figures released by Victoria’s Crime Statistics Agency show crime dropped because there were fewer breaches of the chief health officer’s directions, and reduced detections of drug trafficking, burglaries and robberies.

Assaults, excluding domestic violence, increased. Police say many of those involved people known to each other such as neighbours.

However, police say this data should be treated with caution, as there is the potential for victims to come forward to retrospectively report incidents that occurred sometime earlier.

CSA chief statistician Fiona Dowsley said thefts and burglaries were among the crimes that decreased last year, according to the data.

“As COVID-19-related health responses and restrictions have evolved there have continued to be fewer breaches [of] CHO directions offences recorded in the past 12 months,” she said.

“While each victim of crime is one person too many, we are pleased that last year we had the lowest number of victims in Victoria since 2010, with almost 14,500 fewer victims of crime than the year prior,” he said.

He said police expect the rate of crime to increase again this year as the community returns to normality. 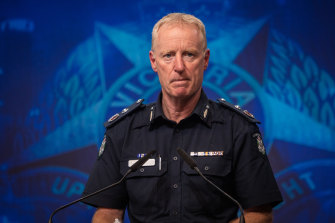 “While it is likely that overall crime will increase as the community returns to normality, the early signs are relatively positive. To date, we have not seen a rapid return across all crime categories, with police intelligence indicating overall offending still remains below pre-pandemic levels,” Mr Nugent said.

Police are holding a press conference on Thursday morning to discuss the data.