The weather was mild, buskers belted out tunes and central Melbourne seemed to shrug off its year of COVID-19 hibernation to bustle once again on the weekend.

Crowds thronged the CBD for the finaldays of the Melbourne International Comedy Festival, of the National Gallery of Victoria’s Triennial exhibition and of the school holidays. 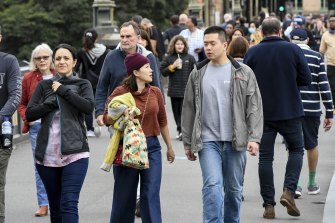 Humming again: crowds on Princes Bridge on the last day of the National Gallery of Victoria’s Triennial exhibition on Sunday.Credit:Penny Stephens

Face masks, except on public transport, were scarce, with restrictions, and fears of the pandemic, subsiding.

City of Melbourne data at the Arts Centre, near the National Gallery of Victoria, showed pedestrian activity had returned to 93 per cent of pre-pandemic levels at 6pm on Saturday.

At the same time at Melbourne Town Hall, where many Melbourne International Comedy Festival shows were hosted, pedestrian activity had returned to 92 per cent of 2019 levels.

Over at the Bourke Street Mall, foot traffic at 3pm had returned to 78 per cent. 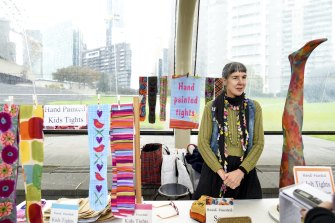 On Sunday, Louise O’Brien, who was selling hand painted tights from the Ralf & Lulu market stall near the Arts Centre, said it was her busiest day since she resumed trading in December, after a nine- month COVID-imposed closure.

She feels people are more confident about going out. “Fewer people are wearing masks, people are not being over-cautious about distancing,” she said. “They’re a lot more relaxed.”

Margaret Finlayson, 83, of North Fitzroy, who came to see the Triennial with daughter, Anna Finlayson, 52, and granddaughter Eva Delouche, 11, said she didn’t expect to see as many people at the NGV.

“You feel a slight apprehension when you see a lot of people together, I think, after a year,” she said. 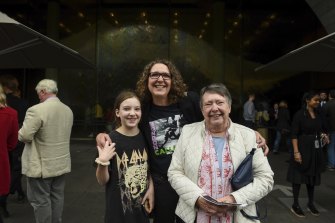 “You keep your fingers crossed that everything will be OK. But it is nice to see everybody out again. It’s lovely.”

In Bourke Street Mall, Amarjeet Sharma, from Mount Waverley, was happy about buying a pair of long leather boots from David Jones department store for $224 — a 25 per cent discount.

She and her husband, Vishal Sharma and daughter Kheyaira, 12, had a lovely time at the NGV and having lunch at Melbourne Central, although Ms Sharma was fasting for the Hindu festival of Navratri.

Mr Sharma said: “We feel blessed to be here and it makes sense because there’s no COVID around.” 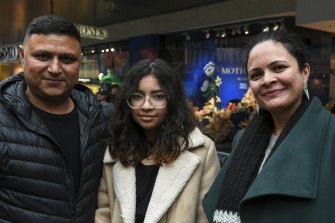 Melbourne deputy lord mayor Nicholas Reece said every extra person in the city represented another opportunity for CBD businesses that had done it tough throughout the past year.

“The increase in pedestrian numbers proves more people are returning to the city and the buzz is coming back to Melbourne … after so much anguish and devastation caused by the pandemic,” he said.

Cr Reece said he went to a comedy festival gig on Friday night and had to stand in a queue to get into a city restaurant afterwards.

“I’ve never been so happy to stand in a line in all my life,” he joked.

“There’s nothing more heartwarming to me than seeing lines outside bars, restaurants and cafes of people waiting to get in and be served.“

At the Arts Centre, foot traffic was up 187 per cent at 6pm on Saturday compared to the four-week average. There were 2857 pedestrians at the centre, which is 93 per cent of 3064, the average amount of people there on Saturdays at that time in April, 2019.

More than 520,000 people have visited the NGV Triennial, which closed on Sunday, including 12,674 on Friday and 9271 on Saturday, up from the previous week.

Director Tony Ellwood AM said the gallery was delighted to have been at full capacity during restrictions throughout the entire season.

He said the gallery had been able to welcome more visitors in its final weeks when its capacity numbers were increased.

“It was really the perfect exhibition to welcome people back to the gallery and we couldn’t be happier with how many people have seen and enjoyed the experience,” he said.

At the Town Hall, there were 187 per cent more pedestrians at 6pm on Saturday compared to the four week average. There were 2720 people at the hall, which is 92 per cent of 2949, the average amount of people there on at 6pm on Saturdays in April, 2019.

Comedy festival director Susan Provan said its final weekend had seen an incredible number of sell-out shows, with many comedians putting on extra ones to meet demand.

“We’ve seen audiences come out with enthusiasm across the last three and a bit weeks of the festival,” she said.

“People are definitely keen to get out and see live shows.”

The City of Melbourne’s pedestrian counter at the northern side of the Bourke Street Mall at 3pm on Saturday showed foot traffic was up by 78 per cent compared with the average on Saturdays in April 2019. There were 3139 pedestrians logged pounding the pavement compared to 4047.

The figure was also up eight per cent on the four week average. At 4pm, it was up15 per cent, with 2986 pedestrians registered up from 2592.

That figure was double the yearly average, with numbers in the mall low throughout 2020 and early 2021 due to Victoria’s lockdowns and restrictions.

The CBD can expect more people to come into the city with the Jurassic World and Brickman exhibitions under way, followed by The Rising Festival beginning next month and the Queen Victoria Market Winter Night Market restarting in June.