'This cannot be overstated': Trump's massive chance to reshape America

New York: In the early days of Donald Trump's presidency, many progressive Americans dared to believe that maybe, just maybe, his election victory would not prove as consequential as they first feared. Yes, a man they thought dangerous and demagogic was in the White House but the other branches of government – Congress and the courts – were providing an effective brake on executive power.

In Trump's first year in office the Senate rejected the eradication of the Affordable Care Act and the federal court blocked his ban on people from several Muslim-majority countries from entering the United States. 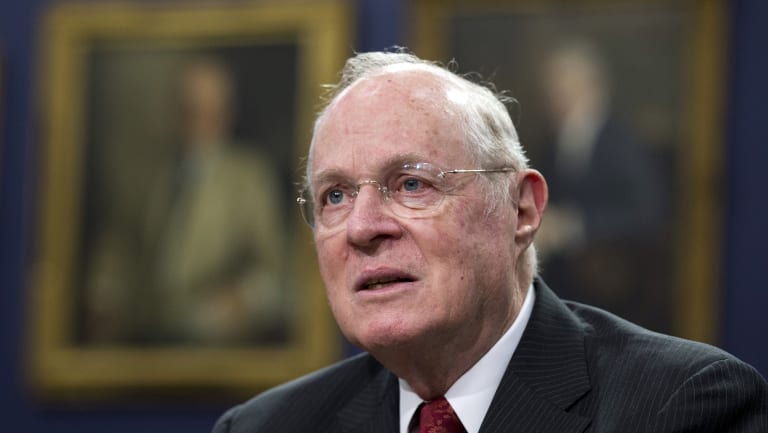 Supreme Court Justice Anthony Kennedy announced on Wednesday that he is retiring after more than 30 years on the court.

Now, with the retirement of Supreme Court justice Anthony Kennedy on Wednesday, the true magnitude of Trump's victory has come into clearer focus than ever before. Kennedy's departure will allow Trump to shift the court decisively to the right, possibly for a generation, and opens the door to a rollback of access to abortion, gay rights and protections for minorities.

Trump is expected to replace the 81-year-old Kennedy with a young, more rigidly conservative, justice and lock in a 5-4 conservative majority on the court, a prospect that sent instant waves of panic throughout progressive America.

"This is not just a chance for President Trump to pick a replacement justice. It is a chance to decide how a branch of government will make decisions for potentially the next 30 years."

Fontana said he expected Republican state legislators to feel emboldened by Kennedy's departure and for them to move quickly to test how far they can go in restricting abortion access.

Dawn Laguens, Executive Vice President of Planned Parenthood Federation of America, said: "The significance of today’s news cannot be overstated: the right to access abortion in this country is on the line."

Kennedy, appointed to the court by Ronald Reagan in 1988, was a conservative but an unpredictable one who became the swing vote on many landmark cases.

In 1992 he upheld the central finding of Roe v Wade – that a woman has a right to have an abortion under fetal viability – and in 2015 he authored the majority opinion that same-sex couples have a constitutional right to marry. In 2016 he provided the crucial vote upholding an affirmative action program at the University of Texas that aimed to boost the number of non-white students on campus.

John Malcolm, vice president of the conservative Heritage Foundation, said Kennedy had a "complicated relationship" with conservatives even though he sided with tended to side with them on campaign finance laws, gun ownership and religious freedom.

"It was not always easy to pigeonhole Justice Kennedy’s jurisprudence, except that it was seemingly marked by an occasional breathtaking inconsistency," he said.

"Hailed by some as ‘King Kennedy’ there was no question that, particularly in recent years, he was usually the deciding vote in close and controversial cases."

The power, and polarised nature, of the Supreme Court has been on stark display this week with a string of close decisions that have delighted conservatives and dismayed progressives. On Tuesday the court, in a 5-4 decision, upheld Trump’s travel ban. On Wednesday, in another 5-4 decision, the court ruled that government workers who choose not to join unions should not be forced to pay membership dues. The decision will weaken the financial clout of public sector unions, including teachers unions.

Trump said the search for a replacement for Kennedy would begin immediately and that he would pick a justice from a list of 25 names released by the White House in November.

Republican Senate leader Mitch McConnell said the Senate would vote to confirm Kennedy's replacement "this fall" – that is by the end of the year and probably before the November midterm elections.

The Democrats' leader in the Senate, Chuck Schumer, said the Kennedy vacancy was the most important "in at least a generation” and that “nothing less than the fate of our health care system, reproductive rights for women and countless other protections for middle-class Americans are at stake".

Schumer said it would be the "height of hypocrisy" for Republicans to hold a confirmation vote on Kennedy's successor this year given the party refused to consider Barack Obama's chosen nominee, Merrick Garland, in 2016.

But the Republicans hold a slim majority in the Senate meaning that, barring any defections, Trump's chosen nominee will take a seat on the nation's most powerful court. He or she will have life tenure, meaning Trump's legacy will likely reverberate for decades after he leaves office.