A mother-of-three care home worker has gone blind after suffering seizures during a seven-week hospital battle with coronavirus.

Sarah Smith, 53, who worked at The Gables Care Home for 18 years, began self-isolating on April 2 and was admitted to James Cook University Hospital in Middlesbrough, North Yorkshire, with Covid-19 two weeks later.

The previously fit and healthy woman lost her sight after developing seizures from posterior reversible encephalopathy syndrome (PRES) syndrome, which is linked to sepsis – a condition that can be caused by coronavirus.

Her daughter Rebecca Smith, 29, was able to briefly see her mother, who still remains at the hospital, on Tuesday for the first time in seven weeks. 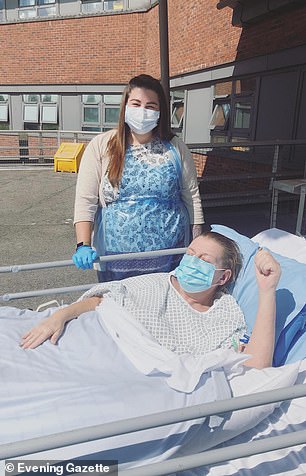 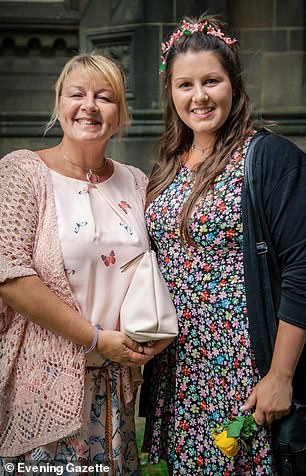 Sarah Smith, 53, in a hospital bed outside with her daughter Rebecca, 29, both wearing face masks (left) and the pair pictured before the care home worker’s hospital battle (right)

Rebecca has shared her family’s devastating battle to show how ‘the damage from coronavirus looks different for everyone’.

Sarah, from Easterside, was placed on a CPAP machine and a hood ventilator to help breathe at the high dependency unit, but was moved to intensive care on April 22.

Her condition worsened and she was placed into a coma, from which she awoke on May 14.

Rebecca, a mother-of-two, explained: ‘She then developed a secondary bacterial infection in her lungs. Coronavirus affects the body in so many ways.

‘On May 6 she started having seizures which left swelling on her brain.

‘Doctors are hoping the PRES syndrome brain swelling she has will resolve and she will regain her sight but there’s a chance the damage will have been done and it won’t. 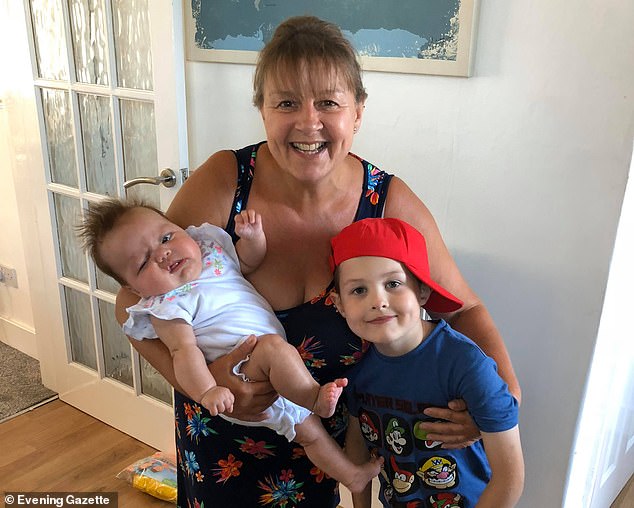 Sarah pictured with two of her grandchildren. She began self-isolating on April 2 and was rushed to James Cook University Hospital in Middlesbrough, North Yorkshire, two weeks later

‘There’s also the chance she had a stroke during her seizures and that has caused the vision loss.

‘She has memory problems, still suffers from delirium, confusion and hallucinations. But there are brief moments of clarity.’

But doctors are unsure when the grandmother-of-three actually lost her sight. Sarah, from Easterside, needs to see a neurologist for treatment.

PRES syndrome: A condition that can be triggered by sepsis – which is linked to Covid-19

If promptly recognised and treated, the syndrome usually resolves itself within one week.

It is strongly linked with hypertension, vascular and autoimmune diseases, exposure to immunosuppressive drugs and organ transplantation.

But it is also triggered by sepsis, a condition that can be caused by Covid-19.

The effects of Covid-19 on the respiratory system are well-known, but virtually all other organs can be affected – consistent with sepsis.

Other research from the same region revealed acute kidney failure in 20 percent of the patients requiring ICU care, and both studies showed septic shock severe enough to need drugs to support the heart and circulation in nearly 70 percent of patients.

But Rebecca says the hospital is having to adapt constantly to meet the individual needs around coronavirus restrictions.

She said: ‘The hospital is split into two sides – Covid-19 and non-Covid – but there aren’t services across the board. She needs to be admitted onto the neurology ward for rehab.

‘Mum needs to see a neurologist and will need rehabilitation to be able to learn to walk again. She’s also got memory problems and sight problems.

‘My mum is now testing negative for coronavirus so the policy needs to adapt.’

Sarah – mother to Jessica, Paul and Rebecca – was moved out of ICU on Wednesday, but Jessica says ‘it was a struggle to find a suitable ward for mum’.

Rebecca captured the moment she was briefly reunited with her mother on Tuesday.

Accompanied by a picture of Sarah in a hospital bed outside, she said: ‘Here she is the absolute hero!

‘She agreed to this photo and had just said, when the nurse asked if she wanted sun or shade, “oh yeah give me the sun baby!”

‘This was her first taste of fresh air since she went in seven-weeks-ago, so was just a one off for 10 minutes.

‘She’s lost a lot of weight and has definitely looked better but I still think she’s beautiful and this picture (which she agreed to) shows her strength.’

Speaking about the affects of coronavirus, she added: ‘Seeing people out and about today and pulling faces at me in my mask in Aldi afterwards I wish they could see the true extent of Covid.

‘That it isn’t just a case of a bad flu as people are still saying widely. The damage looks different for everyone and what it’s done to my mum will change her life even in the best case scenario. But she will still have a good life, I’m sure.’

Rebecca also praised the NHS staff at the Middlesbrough hospital for saving her mother’s life.

She added: ‘I’m so extremely grateful to staff across all roles for everything they’ve done and saving my her life.’

A fundraising page has been set up to help Sarah in her recovery against Covid-19.