Carrie Symonds and Dilyn the dog are running No 10, snipes Dominic Cummings’s ally – as PM’s new press secretary Allegra Stratton rubbishes wild claims of tensions with Boris Johnson’s fiancee, insisting: ‘We are all a nest of singing birds’

The war between Boris Johnson’s fiancee Carrie Symonds and exiled No 10 aides intensified last night after she was accused of ‘running Downing Street’ – with the assistance of her dog Dilyn.

Ms Symonds has been under increased scrutiny since she helped to force out the Prime Minister’s senior adviser Dominic Cummings and communications chief Lee Cain last November.

Now an exasperated friend of Mr Cummings has hit out, telling The Mail on Sunday that while they ‘wished Carrie and Dilyn well’, they thought it was reasonable to question whether ‘they should be running No 10 during a deadly pandemic’. 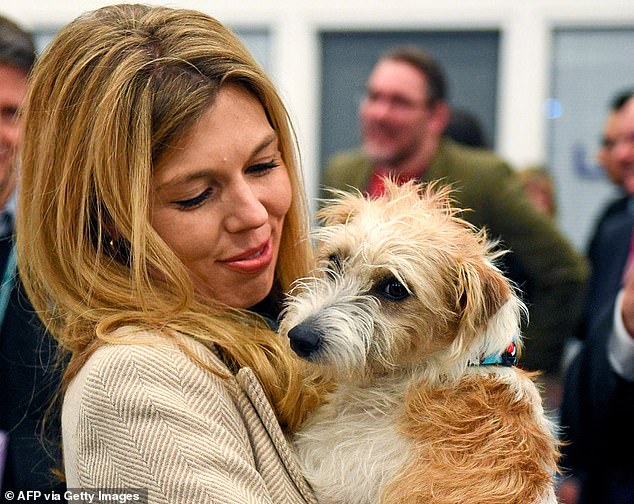 Concern over Ms Symonds’s influence intensified earlier this month when Oliver Lewis resigned as the head of No 10’s ‘Union unit’, responsible for trying to avert Scottish independence, after just two weeks in the job.

His departure came amid claims that Ms Symonds had accused him of briefing against Cabinet Office Minister Michael Gove.

The rash of departures has led the Bow Group Tory think-tank to call for an investigation into the power wielded by Ms Symonds at Downing Street.

Ms Symonds, who is the subject of a cover profile in the latest Tatler magazine headlined Carrie’s Coup, faced fresh questions yesterday over reports that she had tried to damage the careers of leading female civil servants by briefing against them.

Some of Ms Symonds’s growing number of allies in No 10 are said to ‘roll their eyes’ when he speaks during meetings. 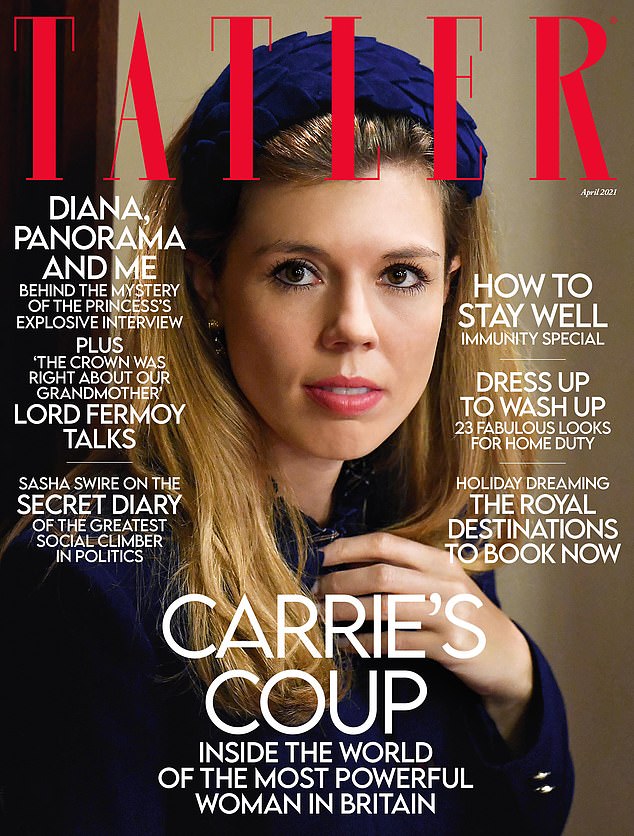 Ms Symonds is the subject of a cover profile in the latest Tatler magazine. It was reported the picture had been edited ‘to make her skin look significantly smoother and brighter’

‘I love Carrie and would do anything for her. When we all go out for a drink she is just the best fun imaginable. We are all a nest of singing birds.’

The Mail on Sunday revealed last week how Dilyn, the Jack Russell cross owned by Mr Johnson and Ms Symonds, had played a walk-on role in the factional feud at Downing Street – including claims that he had cocked his leg over an aide’s handbag and chewed antique furniture at Chequers, the Prime Minister’s country retreat.

There had been suggestions by members of ‘Team Carrie’ that Mr Cummings was behind the hostile briefings against the dog, which have been neither substantiated nor dismissed. However, Mr Cummings is known to have been irritated by Ms Symonds’s determination to obtain a correction from The Times over a report about the dog being poorly trained. 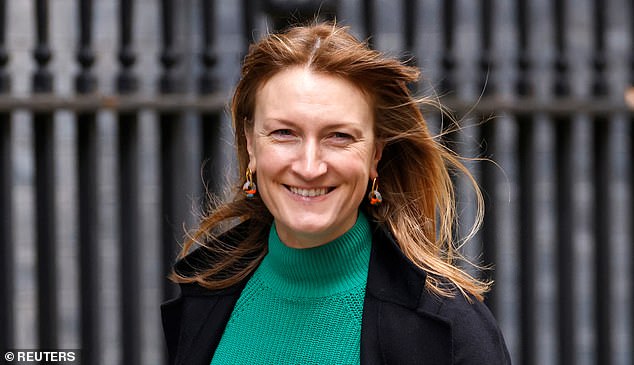 Reports suggest that Ms Symonds had been disparaging about Antonia Romeo, the permanent secretary at the Ministry of Justice, at a time when she was tipped to become Britain’s first female Cabinet Secretary. Ms Romeo lost out to Simon Case, a less experienced candidate.

As The Mail on Sunday revealed last year, Ms Romeo was the subject of an official investigation into allegations that she bullied staff and misused expenses in 2017, when she was Britain’s consul-general in New York.

After she was cleared by the Cabinet Office and promoted, Ms Romeo’s supporters said the allegations had a ‘whiff of misogyny’ – which is the same complaint Ms Symonds’s allies make about the claims that she is the Lady Macbeth of Downing Street. 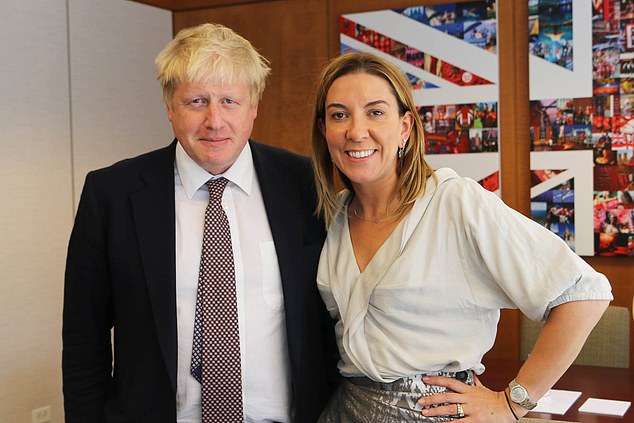 Reports suggest that Ms Symonds had been disparaging about Antonia Romeo, the permanent secretary at the Ministry of Justice, at a time when she was tipped to become Britain’s first female Cabinet Secretary. Picture Antonia Romeo with Prime Minister Boris Johnson

A spokesman for Ms Symonds declined to comment last night.

But a Downing Street source said: ‘These are the latest in a series of false and malicious allegations against Ms Symonds who is a private individual and plays no role in either Government policy or appointments.

‘The people making these allegations should be thoroughly ashamed of themselves.’

Nearly a third of young adults prefer Carrie Symonds to Boris Johnson, a poll for society magazine Tatler has found.

The survey, which also found that 69 per cent believe that Ms Symonds, 32, influences decision-making at No 10, forms part of a cover-story on the Prime Minister’s fiancee headlined: ‘Carrie Coup’. 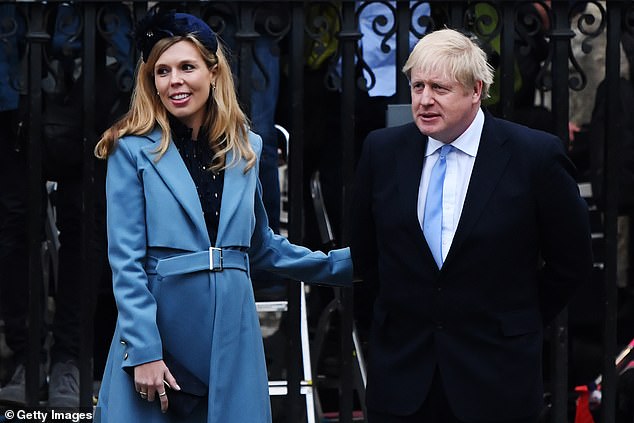 The profile includes comments from Ms Symonds’s closest friend, Nimco Ali, the women’s rights campaigner, who is quoted as saying: ‘She’s fun and kind, and she wants the world to be a better and a safer place for women. Pictured Ms Symond’s with her fiance Boris Johnson

The profile, which will feature in the April issue, asks: ‘Who is the real Carrie Symonds?

‘Is she the scheming Lady Macbeth pulling the strings inside No 10 or a fun-loving friend, feminist and mother, who just wants to save the planet?’

The profile includes comments from Ms Symonds’s closest friend, Nimco Ali, the women’s rights campaigner, who is quoted as saying: ‘She’s fun and kind, and she wants the world to be a better and a safer place for women. Can someone tell me what’s wrong with that?’

The Tatler article features a photo of Ms Symonds taken at the State Opening of Parliament in October 2019. It was reported the picture had been edited ‘to make her skin look significantly smoother and brighter’.