'A catastrophe': French museum discovers more than half its collection is fake 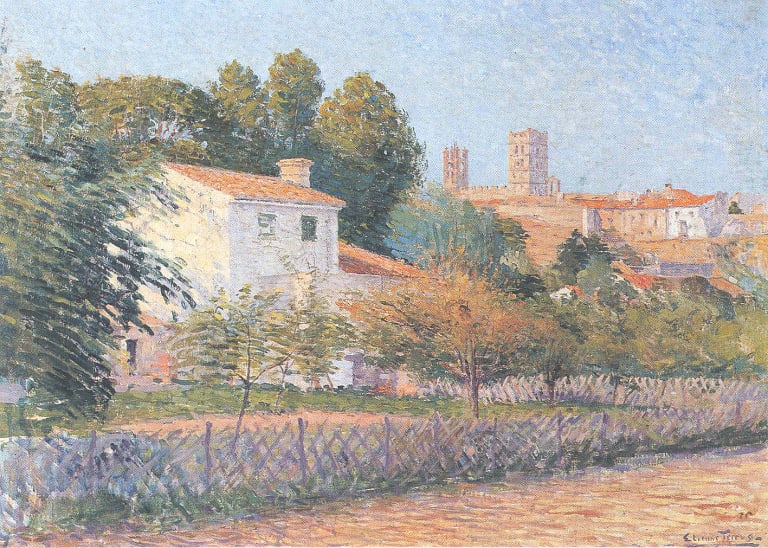 Vue d’Elne, a painting thought to have been painted by French artist Étienne Terrus around 1900.

Paris: One painting included a castle tower that had been built in the late 1950s. But the artist who supposedly painted it, Étienne Terrus, died in 1922.

On another canvas, a light touch with a glove was enough to wipe away what had appeared to be Terrus' signature, revealing another painter's name.

These are the most flagrant examples of the disconcerting discovery made by a small art museum in the south of France: More than half of the works in its collection were fakes.

The Terrus museum in Elne, France, has spent the past two decades amassing a collection of what curators thought were the works of Terrus, a local painter. He was born in 1857 and died in 1922 and is best known for his landscapes of the Roussillon region in the south of France.

The museum was set to reopen after a renovation when the forgeries were discovered by a local art historian, Eric Forcada, in September. A simple glimpse at images of the paintings that Forcada received by email made him wary of their authenticity, he said in a phone interview. After inspecting the artworks and confirming his findings with a panel of experts, he found that 82 of the 140 pieces in the collection were counterfeits.

Most of the fakes were acquired after 2013 and were not on exhibit because town officials were awaiting the creation of a second floor in the museum to display its full collection, Forcada said. Still, 10 to 15 forgeries hung on the museum's walls for years, and Elne's mayor, Yves Barniol, called the fraud a catastrophe for his municipality.

The town council filed a complaint in March, leading the police to begin an investigation, and the museum reopened Friday with about 60 paintings by Terrus, all authentic. Yet local officials said it could take years to find out who was behind the fakes.

Beyond the blow to the museum's and the town's reputations, the case has illustrated the risks that European small towns face when seeking to enhance a heritage that can galvanise cultural life and attract tourists. The Terrus museum had neither a curator nor a team dedicated to acquisitions.

Yet after Barniol became mayor of Elne in 2014, and as the museum's founder was purchasing an increasing number of canvases in recent years, the town started to spend dozens of thousands of euros to restore some of the paintings, install better lighting and regulate the building's temperature so the works could be better preserved.

Mathieu Pons-Serradei, a lawyer representing the municipality, said the town had also spent €160,000 ($256,000) buying artworks on behalf of the museum. Other paintings were purchased through fundraising campaigns or bequeathed by collectors.

"It has become increasingly unsustainable for small towns to run museums, and it has become increasingly simple for fraudsters to trick municipalities with fakes," Forcada said. "It is easy to buy a €5 canvas at a flea market and to sell it to a small museum for €3000, while faking a Picasso or a Matisse and selling it to a great Parisian museum is impossible."

The Terrus counterfeits involved preposterous landscape imitations, canvases dating from the same era but painted by other artists, and fakes with flagrant anachronisms that had been painted decades after the artist's death.

Lynda Albertson, the chief executive officer of the Association for Research Into Crimes Against Art, said in an email that the museum was under public scrutiny because it admitted that some of the fakes it acquired appeared "to have been rather obvious."

She added that an acquisition process should involve "exercising due diligence in terms of researching provenance and, when necessary, conducting material analysis during the acquisition of artworks."

This is also not the first case of a French museum discovering it is in possession of counterfeits. In 2016, the French Culture Ministry issued a statement saying that the police were investigating €2.7 million (around $4 million at the time) worth of furniture, including two Louis XV chairs, purchased by the Palace of Versailles.

Art historian Bill Pallot and gallery director Laurent Kraemer were arrested in that case and are awaiting trial this year.

The scandal rocked the French art world and led to the culture ministry reforming its acquisitions process for national museums. According to The Art Newspaper, the ministry established research centres to carry out authentication analysis on items before they enter national collections.

The Versailles fiasco also prompted La Biennale Paris, a venerable French art fair, to tighten its vetting process last year. The examination of artworks offered for sale at the fair is now handled by an independent committee of experts, none of whom show at the fair, and whose decisions cannot be reversed by the National Federation of Antiques Dealers, the body that organises the event.

Yet the Elne museum is part of another arts world, one of small, local museums that live on tight budgets and local donations and that cannot benefit from the services offered by the Ministry of Culture. The Terrus museum isn’t labeled a “museum of France,” an official distinction monitored by the ministry.

A local artist who went to study painting in Paris when he was 17, Terrus did not seek fame in the French capital and returned to his native region in 1882. Although he refused any label, he has been seen as a precursor of fauvism, a movement in the early years of the 20th century that favored cheery landscapes in vivid colours and was popularised by Henri Matisse, who was Terrus' friend.

"Even for art historians, Terrus remains a mystery," said Forcada, who described him as a political anarchist who repeatedly refused the offers of another friend, well-known sculptor Aristide Maillol, to help him exhibit in Paris. Instead, Terrus spent his life in Elne and died there.

"Terrus was a son of the countryside," Pons-Serradei, the lawyer for Elne, said about the southern area of Pyrénées-Orientales, which spreads at the French-Spanish border from the hamlet-state of Andorra to the Mediterranean Sea. "That his memory was tarnished by fakes in a museum that bears his name is a profound shock."