Caught on camera: Cyclist crashes into a van

Shocking moment cyclist is nearly killed as driver yells: ‘That wasn’t my fault!’ – so who do YOU think is in the right?

This is the moment a cyclist went flying into a car windscreen at such force the driver thought he was ‘dead’ – prompting him to shout ‘that wasn’t my fault’ in shock to passersby.

Plumber Ian Payne was driving to fix an emergency leak in Portsmouth, Hampshire, on May 23 when the rider came flying out from behind a parked van seemingly without looking and smashed into his bonnet.

Footage shows the cyclist hit the car with such force that his head – only wearing a baseball cap and no helmet – bounces off off the windscreen and cracks it, before he crashes to the floor and howls in pain. 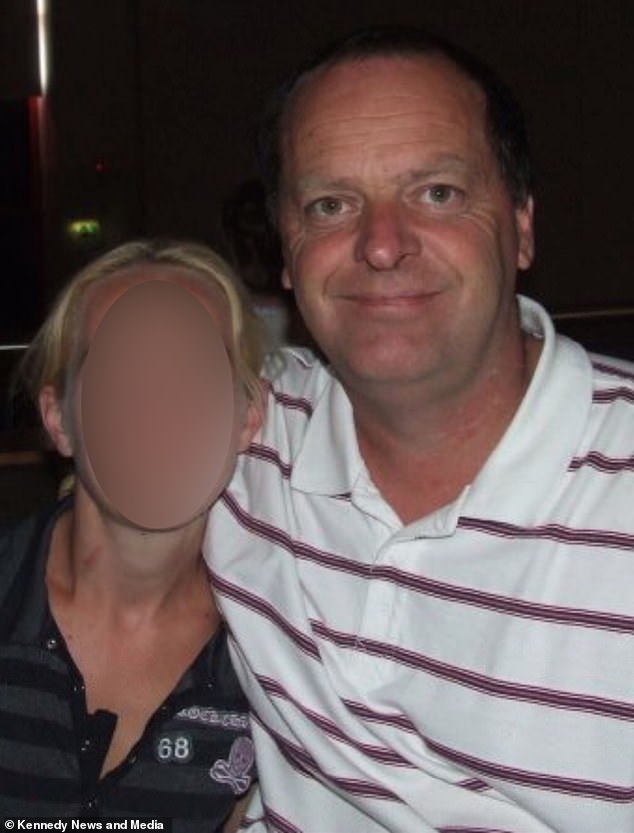 Plumber Ian Payne was driving to fix an emergency leak in Portsmouth, Hampshire, on May 23 when the rider came flying out from behind a parked van seemingly without looking and smashed into his bonnet

The 68-year-old driver screeches to a halt and immediately shouts out of his window to tradesmen working next to them in ‘shock’, pointing out it was the cyclist’s error for racing across the junction without looking.

Mr Payne claims he called police and an ambulance but the cyclist rode off before the ambulance arrived – leaving Ian furious as he claims the rider had admitted to not being sober.

He  said: ‘Just when I’d come off the A3, there was a van on the island and there were some guys fixing a light.

‘As I was driving round, I was coming around about 18 miles an hour and then suddenly this bike just appeared from nowhere.

‘He’d come off the footpath, straight across one road then on a footpath onto the island and hit me. He was so fast.

‘It was just a shock at first. I did turn round and swear and shout at those guys fixing the lights, ‘It’s not my fault’, but I think that was just the shock of the moment.

‘I always thought I was a careful driver anyway, he was just going so fast I could never stop him. There was space for him to stop so really he should have stopped on the other side of the road.

‘I was shaking a little bit. I had to take a few minutes to get myself back because I did feel a little bit shocked. It did shake me up. The first hour I had to have a couple of cigarettes.

‘The way that his head hit it, I just can’t believe that he walked away.’

Upon getting out of the van to check on the cyclist, Ian alleges that the rider admitted to not being sober. 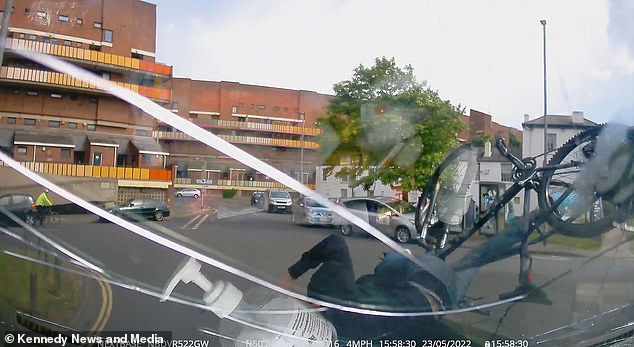 The cyclist bounced up onto the windscreen, smashing it before falling to the ground. Mr Payne thought he may have just killed the young man

Mr Payne said: ‘When I got out of the van to see if he was alright he said he’d been up all night. He was not sober so you couldn’t make head or tail out of him to be honest.

‘By the time the ambulance turned up he had wandered off.

‘The only reason I bought my dashcam in the first place was because I’d seen push bikes and scooters pull out in front of people all the time. So I got it for my own safety.

‘It happened so quickly for me. Obviously I was quite gutted for him at first but when he told me he was not sober then I thought if I was driving down the road with one of my kids in the car it could have been a lot worse.

‘I feel that he put other people in danger by behaving like that.’

Mr Payne shared the video to Facebook in a bid to raise awareness where it has gone on to receive more than 17,000 views and 500 comments.

He said: ‘I only put it on Facebook because I wanted to make people aware that dashcams are brilliant to have.

‘I think with what happened you are a bit more wary. It’s definitely changed how I approach cyclists.

‘I’m not being funny but he could have said anything he wanted without the dashcam. It’s had 17,000 hits already and I only put it on a few days ago.

‘I mean the post reactions aren’t that bad. I’ve had a few comments where people have said it was a bike path but it isn’t.

‘But I’ve had some bad comments and I’ve also had some good comments. Even in those comments they realise that it wasn’t my fault.

‘He should have stopped and that was that.’

A spokesperson for Hampshire Police said: ‘We were called at 4.04pm on Monday 23 May to a report of a road traffic collision involving a van and a cyclist on the M275 southbound.

‘The cyclist, an 18-year-old man, sustained minor injuries. The circumstances of this incident are under investigation. No arrests have been made at the current time.’