There was more foot traffic in Melbourne’s CBD during the morning peak hour on Monday than on any Monday morning since the first lockdown last year, as the school year resumed and some workers returned to their offices.

While numbers are still well below pre-pandemic levels, City of Melbourne data shows 786 pedestrians were logged pounding the pavement outside Southern Cross Station on Collins Street between 8am and 9am on Monday – the highest count for that time of week since late March. 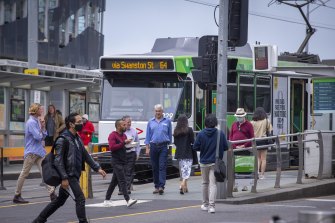 It is also double the number of people who were recorded walking through the area – one of the busiest spots in the city for foot traffic – at the same time a fortnight ago, when many CBD workers were originally encouraged to return to the office for the first time in months.

But there was still far less foot traffic than on a typical Monday morning in 2019. In that year, almost 3800 pedestrians would be logged walking through the area between 8am and 9am on a Monday, almost five times more than the latest figure.

Another busy sensor location for CBD morning peak foot traffic is the Flinders Street Station underpass, where 1114 pedestrian were logged between 8am and 9am on Monday.

The last Monday morning with so many people in that area was March 16, directly after the weekend of the cancelled Melbourne Grand Prix, when first-wave case numbers were on the rise and many Melburnians started working from home.

The government expects the public transport network to return to 80 per cent capacity by mid-2021, with public transport use climbing to 40 per cent last week and ridership on Wednesday reaching 44 per cent. Roads averaged about 90 per cent of capacity.

Flinders Street Station was quiet at lunchtime on Monday, with a few students and workers seen wearing face masks and headphones, and keeping to themselves.

Some commuters told The Age trains and trams were emptier than they were pre-COVID, while most commuters socially distanced and wore masks. 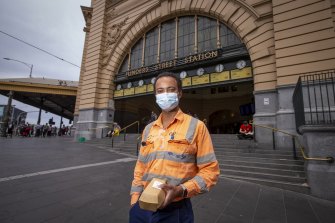 Myles Baiden Assan says most passengers were wearing masks on the train to the city on Monday.Credit:Wayne Taylor

“It’s pretty spacious at the moment,” said Myles Baiden Assan, a construction worker from Reservoir, of the train he took to the CBD on Monday morning. “There aren’t that many people on the train, so you usually get a seat.”

Mr Assan said most people were trying to socially distance, but a few sat close together and a minority refused to wear masks.

“Probably 90 per cent of people have a mask on, so it’s usually pretty good. People figure it out after a while if they look around and everyone else has got masks on.

“But some people are making a point of not wearing masks, it’s a bit weird.” 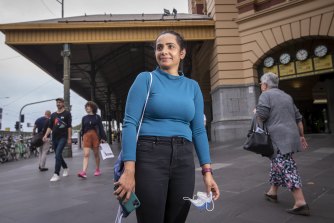 Madhu Choubey, a hospitality worker from Southbank, took the tram to the CBD at 6am on Monday and said the carriage was empty.

“I felt safe. Before COVID public transport used to be more crowded, but now it’s pretty empty most of the time – 90 per cent of the time I get a seat.”

“I don’t think there are instances of crowding yet, but certainly the system is continuing to get busy,” he said. “There were a few odd reports on the weekend of tram patronage appearing to be closer to normal.”

But the days of workers going into the office on 9-5 schedules might be gone forever, “so patronage may never come back to what it was”, Mr Bowen said.

The government’s approach of rolling out masks, extra services and off-peak myki discounts was key in curbing the virus’ spread and encouraging people to use the network again, he said.