The CBI boss leading calls for UK workers to return to the office has revealed she is only going back herself for two days a week from September.

Dame Carolyn Fairbairn told BBC Radio 4 today that she doesn’t expect staff at CBI bases across the UK ‘to come into the office until at least the end of the year.’

She added: ‘We have our office open for those members of staff who really want to come in, I myself am going to work two days a week from the office from the beginning of September.

‘But absolutely crucially, we have said to every single staff member, no one will be expecting them to come into the office until at least the end of the year.’

The Confederation of British Industry has 13 offices across the UK in cities including London, Belfast, Glasgow, Newcastle and Leeds, alongside international hubs in the US, China and India. 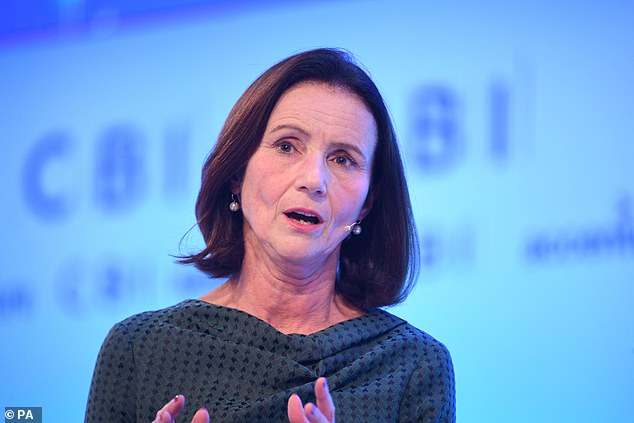 Dame Carolyn Fairbairn (pictured), director-general of the CBI, today revealed she is only going back to the office herself for two days a week from September

Josh Hardie, deputy director-general of the CBI, today told MailOnline ‘only a handful of staff’ have so-far returned to the workplace.

He explained their offices have been open to employees who were ‘struggling to work from home and did not need to use public transport to get to work’ since mid-June.

‘Our next phase of reopening will be from September 7, where we are helping those staff members who wish to come back to the office to do so, including senior management,’ Mr Hardie said.

‘No-one is being obligated to return before the end of the year. But we do believe it is important to build confidence for our staff so that it is as easy possible for those who want to use the office to do so. 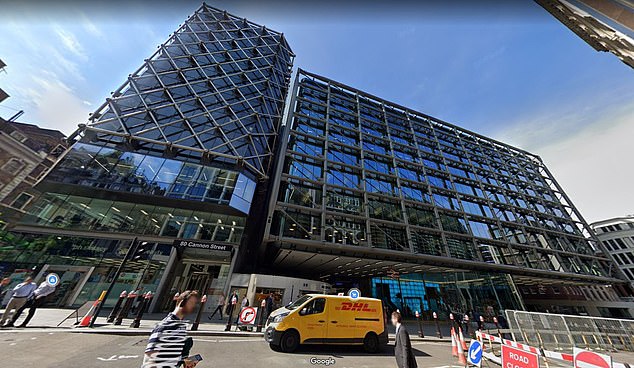 Josh Hardie, deputy director-general of the CBI, today told MailOnline ‘only a handful of staff’ have so-far returned to the workplace. Pictured: A CBI office in London 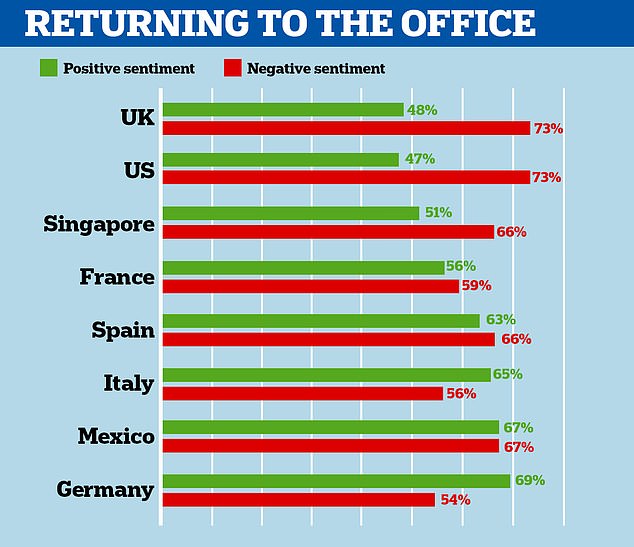 British workers are the most reluctant to return to the office because of fears of a second wave of coronavirus, a new study has found 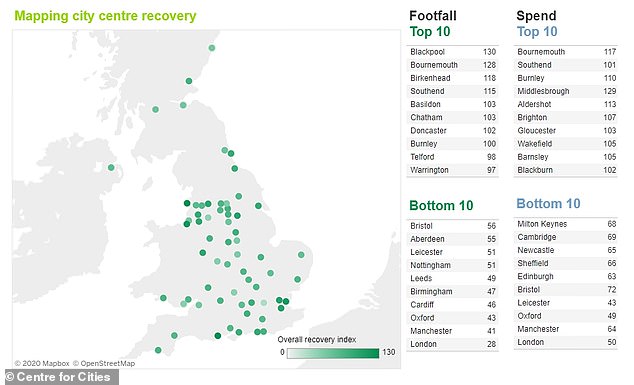 ‘Things won’t return to how businesses operated pre-COVID-19, nor should they. Remote working for many businesses and employees has been a real success and we shouldn’t lose those gains. But there is a balance to find as the economy reopens.’

Director-general of the CBI Dame Carolyn, who speaks for almost 200,000 firms, this week warned commercial centres risk becoming permanent ‘ghost towns’ if Boris Johnson does not do more to get office workers back at their desks.

‘The UK’s offices are vital drivers of our economy,’ she said on Wednesday. ‘They support thousands of local firms, from dry cleaners to sandwich bars. They help train and develop young people. And they foster better work and productivity for many kinds of business.

Decisions taken over the next few weeks will shape our economy for a decade. Getting schools back is an essential component. But as important will be building the right environment to get people back into offices and workplaces.

The UK’s offices are vital drivers of our economy. They support thousands of local firms, from drycleaners to sandwich bars. They help train and develop young people. And they foster better work and productivity for many kinds of business.

The costs of office closure are becoming clearer by the day. Some of our busiest city centres resemble ghost towns, missing the usual bustle of passing trade. This comes at a high price for local businesses, jobs and communities.

Remote working has been a resounding success for many firms and employees, and none of these benefits should be lost. Many people have never worked harder, keeping businesses afloat from their desks and kitchen tables. Flexible working is here to stay and needs to remain an option for many.

But there are serious downsides too. For young people, learning face to face in the workplace is an unbeatable way to build skills and confidence. We must not deprive the next generation of this opportunity.

Not everyone has the space to work effectively at home – an ironing board in the bedroom does not make a great workspace. And the mental health challenges triggered by isolation are all too real for many.

There is also the question of fairness. Many employees, from barbers to brewers, have no option to work from home. We don’t want to see a new divide in our society – between those who can and can’t work from the safety and comfort of their homes.

For all these reasons we need more people to feel it is safe and possible to go back into their places of work. This is why we are today calling on the Prime Minister and his Government to do more to build confidence around getting people back into offices and workplaces.

Getting schools open safely is a vital first step to enable parents to go back to work, but they must stay open wherever possible.

This means effective test and trace, and a focus on resilience. We need government, nationally and locally, to do much more to build confidence in public transport.

They need to shout louder about safety measures in place, enforce the wearing of face masks on tubes, buses and trains, and support the introduction of flexible season tickets so people can return gradually without financial penalty.

And we urgently need mass widespread testing – including in the workplace – to help people feel confident and safe. We welcome the Health Secretary’s recent commitment to a mass testing strategy for 2021.

More flexible working is indisputably a good thing for our economy and quality of life, but we must have a balance. It’s time for the UK to bring its workplaces back to life, or we will look back with regret at the jobs lost, training missed, and communities harmed.

We ask the Government to work with business to build confidence in returning to offices, starting now.

‘The costs of office closure are becoming clearer by the day. Some of our busiest city centres resemble ghost towns, missing the usual bustle of passing trade. This comes at a high price for local businesses, jobs and communities.’

She added that getting staff back into offices and workplaces is as important as the return of pupils to school.

Today, Dame Carolyn explained a return to work is ‘about balance between flexible working and office working’ as she echoed her concerns about deserted city hubs.

‘We’ve seen the most extraordinary effects from flexible working, productivity improvement, better quality of life, there’s no doubt about that and we’re not going back to where we were,’ she said.

‘We must remember the huge importance of offices. The mental health benefits of being in an office, the training benefits for young people, and the third reason I think is absolutely fundamental, we do have a number of our bigger cities, they feel like ghost towns.

She added that firms are ‘really thinking hard’ about how to implement a return to work, with some employees who are keen to return to the workplace still concerned about public transport and childcare.

‘We know that there is real demand for coming back to the office from some people,’ Dame Carolyn said. ‘Firms want to do right by their employees and create that flexibility.

‘I think there are a number of things the government can do, the first is Test and Trace, this is all about confidence in people feeling it’s OK to leave the home.

‘We’re not talking here about a stampede back to the office, that simply is not going to happen, but unless we start putting the measures in place to build confidence, the childcare, the test and trace, the confidence in public transport, the risk is that we will look back discover we have lost something incredibly valuable.’

An audit of major employers conducted by the Mail this week revealed most have only a small percentage of staff back in the office – and many are telling people they will not be back at their desks until January at the earliest.

Firms opting to keep most staff working from home for the rest of the year include NatWest, which employs almost 50,000; BT, which has 40,000 staff at home; KPMG, which has only 10 per cent of its 16,000 staff in the office; and Vodafone, whose 7,850 staff are almost all at home.

Tech giant Microsoft has said it will not start returning its 3,000 UK staff to their desks until at least November.

A separate survey by the BBC found that 50 of the country’s biggest employers have no plans to return all staff to the office full time.

The Government last month dropped the formal pandemic advice that people should work from home if possible.

Mr Johnson said ‘start to go back to work now if you can’ and ordered Whitehall to draw up detailed plans for getting more civil servants back.

However the return to work across Government appears to have been only a trickle, rather than a flood.

Ministers are in talks about workplace testing for coronavirus in order to give staff more confidence to return. But talks are still at an early stage and there has been no effort to encourage commuters back onto public transport.

A Whitehall source said this week: ‘Getting people back to work is something the PM feels strongly about. It is slowly happening in Whitehall but not at the pace we would want.’