The prospect of a super-soft Brexit increased last night after Jeremy Corbyn held talks with Tory supporters of a Norway-style deal with the EU.

Norway’s arrangement with the EU forces it to accept the free movement of people ruled out by Labour’s 2017 manifesto.

But in a surprise move, the Labour leader discussed the idea with a cross-party group of MPs calling for the softest possible Brexit.

In a separate development last night, the House of Lords voted for plans that would force Theresa May to seek a permanent customs union with the EU after Brexit.

The moves underline fears at the top of Government that Parliament will seize control of the Brexit process if Mrs May’s deal is rejected for a second time on March 12. 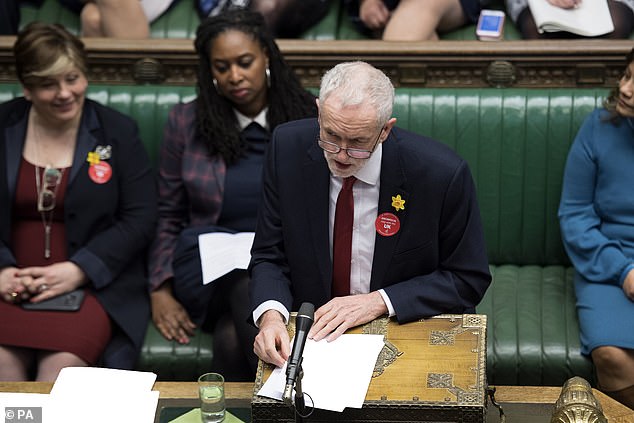 Chief Whip Julian Smith warned the Cabinet on Tuesday that Parliament would ‘try to force the Government into a customs union’ if the deal is defeated next week. Mrs May is considering a public warning on the issue tomorrow in the hope of pressuring MPs into supporting her proposals.

A Whitehall source said the PM could make a major speech ‘framing next week as the moment of decision for the country’.

Mr Kinnock said the meeting involved talks about a Norway-style deal, adding: ‘There is a strong cross-party consensus for a pragmatic, bridge-building Brexit.’

Sir Oliver, working with Labour’s Yvette Cooper, is leading a push for Parliament to take control of the Brexit process. 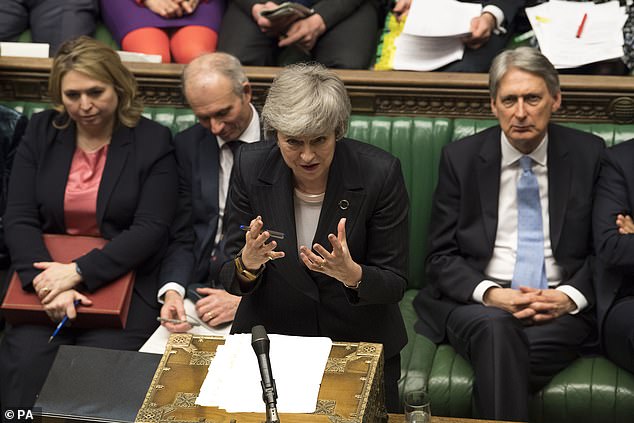 In a separate development last night, the House of Lords voted for plans that would force Theresa May to seek a permanent customs union with the EU after Brexit

Former Tory leader Iain Duncan Smith said last night it was ‘astonishing’ that senior Conservatives were willing to work with Labour’s hard-Left leader on plans that would undermine Government policy.

Last night, peers backed an amendment to the Customs Bill by a majority of 66 that would require Mrs May to seek a permanent customs union with the EU after Brexit. An alliance of Labour, Lib Dem, cross bench and some Tory peers defeated the Government by 207 votes to 141.

Labour’s trade spokesman in the Lords, Lord Stevenson of Balmacara, said: ‘Ministers must drop their red lines on Brexit and embark on a fresh approach to the negotiations with the EU based around a Customs Union that protects jobs, secures opportunities for our industries, and removes the need for a hard border in Ireland.’

Ministers had been resigned to losing last night’s vote, but No10 indicated it would seek to overturn the demand in the Commons, where MPs have already voted twice to reject a permanent customs union.

Mrs May’s spokesman said: ‘The PM has been clear about the importance of the UK being able to have its own trade policy.’

Norway is not in the customs union but is a member of the EU’s single market, and has to accept free movement, pay into the EU budget and accept EU laws. Senior Tories warn that making the UK a rule-taker undermines the idea that the UK is taking back control from the EU.