Chicago Mayor Lori Lightfoot is lashing out at Cook County State’s Attorney Kim Foxx for citing “mutual combatants” in her decision not to press charges against those arrested in a deadly daylight neighborhood shootout caught on camera last week between rival gang members.

“She’s got to explain to the public, why? Given that evidence, a pod camera right there that captured the entire thing and police officers on the scene in uniform, and a squad car there, why that isn’t enough?” Lightfoot said at a press conference Monday. “If the bad guys that are out there that are picking up guns and shooting without any regard for the sanctity of life, do not believe that there’s accountability for them, the brazenness will not end. It will escalate, it will continue and our communities will not be safe.”

One person was killed and five others were taken into custody and later released in connection to the shootout that happened in the Austin neighborhood Friday on the city’s West Side. Three gang members began shooting into a single-family home in broad daylight in an effort to draw out members of an opposing gang faction. Three individuals inside returned fire, killing one of the offenders outside.

More than 70 rounds of shells were recovered from the shooting captured by a city camera, and a set of uniformed officers in a marked squad car were also on the scene within a short period of time and witnessed the activity, Lightfoot, as well as five alderman, in a letter obtained by Fox 32, implored Foxx to reconsider felony charges, like attempted murder, at least against the two surviving initial aggressors. 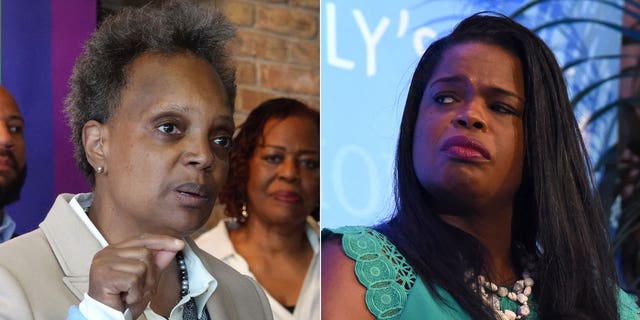 Those inside the house refused to come out and a SWAT team was called, giving the three time to get rid of all their guns and clean up any remaining evidence, the letter says. Several gun cases, but no weapons, were found, a fact the mayor and alderman say alone warrants further investigation.

“Having looked at this, gotten a deep understanding from the detectives that were doing the investigation, it’s really hard to understand that decision,” Lightfoot continued at her press conference Monday. “It’s complicated, for sure. But we really urge the State’s Attorney herself to get personally involved, look at the evidence, and I believe that there are charges that can be brought at a minimum against the individuals who initiated the gunfire.”

“We can’t live in a world where there is no accountability,” the mayor said. “When there’s no accountability, meaning individuals who wreak havoc, who fire indiscriminately or fire at a target but without any regard for the sanctity of life and the health and well-being of others, if they do not feel like the criminal justice system is going to hold them accountable, we’re going to see a level of brazenness that will send the city into chaos. We cannot let that happen.”

Foxx defended her office’s decision in a statement released later Monday, saying Lightfoot, as a former federal prosecutor, should know better than trying cases in the media without sufficient evidence.

“As a former federal prosecutor, the mayor knows of the ethical obligation of the prosecutor to only bring forth charges where the facts, evidence and law support it,” Foxx said. “She is also fully aware that as a prosecutor we are obligated not to try cases in the media. It is unclear why she has chosen to make such statements, especially absent the full information that was presented to our office by CPD.”

“The facts the mayor presented today simply are not in line with what was presented to us by CPD, and not born out by the evidence we received,” the state prosecutor continued. “The staggering violence that is devastating our communities is horrific, however, we must still adhere to both our ethical and legal standards in evaluating charges. As a former prosecutor, she knows that.”

Foxx explained that detectives had reached out to her office on Friday “and acknowledged at the outset that given the chaotic nature at the scene they were unable to determine how the events unfolded.”

“We reviewed the evidence that was presented to us in consultation with the detectives and they agreed we were unable to approve charges based on the evidence presented,” she wrote. “However, as always, as additional evidence is gathered we stand ready to bring charges when appropriate.”

Foxx reportedly initially cited “mutual combatants” in her decision not to press charges, a legal term referring to when both parties enter into a fight willingly upon equal terms. But the mayor and alderman wrote in their letter Monday that from their perspective, “the individuals who initiated the gunfire are not ‘mutual combatants’ and certainly weren’t firing in self-defense.”