For Melbourne's migrant communities, a trip to the hairdresser or barber can mean more than just a haircut.

Cyndi Amankwatia, the owner of African Braids and Beauty in Dandenong, says a hairdresser’s ability to connect with her customers is almost as important as the hairstyle itself.

Last week one woman was so excited to find a hairdresser who spoke her own Ghanaian language that Ms Amankwatia could hardly get her out of the door for the next appointment. 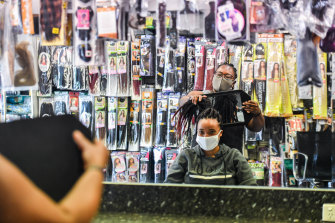 Cyndi Amankwatia has run African Braids and Beauty in Dandenong for 18 years.Credit:Joe Armao

“One of [the customers] I could tell was so stressed she just wanted to come in, because she came [to Australia] not long ago and she still doesn’t speak much English,” she said.

Ms Amankwatia's salon drew a steady stream of African customers from its opening nearly 20 years ago, in part because the products she uses weren’t available in Melbourne in the early 2000s.

“Then there’s the beads, the African materials – all those things we don’t get here because they’re not made here," she said.

“The fun part of this business is us talking to the customers and customers telling us their problems, or what they went through and what the lockdown meant, and the kids, and everything,” she said.

Just a few streets away from Ms Amankwatia's shop, over the Princes Highway, Hazara refugee Mohammad Najafi, owner of Najafi Barber, has also created a cultural hub for people born in his homeland.

Many of his customers are Afghans who speak little English, and are grateful they have a barber with whom they can communicate comfortably.

“I’ve been able to speak to them about their emotional health and we try to talk about the challenges that everybody is facing around the world,” Mr Najafi said. 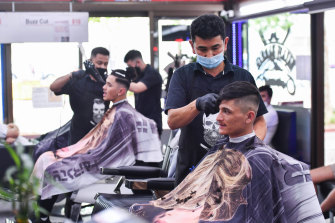 “We empathise with each other about how we can follow the rules, so that we don’t go back to the lockdown.”

“Connecting to our heritage is not just about cultural festivals and big gatherings," she said.

"Many every day places, like barber shops and hair salons, become community hubs – offering a respite from daily stresses, a chance to speak a community language or dialect and a comfortable place to laugh, learn and celebrate."

Minister for Multicultural Affairs Ros Spence agreed the intimacy of getting a haircut was an important part of communities rebuilding after the lockdown.

"What's the saying about hairdressers being quasi-psychologists? It's true. The salon has always been a place for people to take a break and just talk – and that's absolutely vital right now," she said.

"It's fantastic to see these businesses back up and running – and providing that crucial community link, particularly for our multicultural Victorians."